On Saturday we head off on holiday while we’re still allowed to and hopefully before most people have realised they can.

We head up to Pickering to stay in a converted croft, thought to be built in the 16th Century, and which is now called Cherry Tree Cottage. Apparently there are no east facing windows because these were blocked up in 1665 to keep out the great plague. Hopefully this also works for Covid.

The sleeping area is on a balcony above the living room\kitchen area where in the past you would have benefited from the warmth of the animals sleeping below. Our animals, however, benefit from the comfort of the bed itself while the rustic nature of the whole thing appears to give the Lad Carte Blanche to pee everywhere.

There is a great narrow alleyway down the side of the building which is great for parking practice.

We have an Indian takeaway on one side and a Chinese takeaway on the other side. Over the week we have two Indians and a Chinese but our first night meal is rehashed Indian remains from Friday cooked with the only meat, some cheap steak, we could get from the local petrol station. We completely missed seeing the local shop three doors down from us.

On Sunday we drive to Bridlington which is further than we expected and totally packed with folk celebrating their new found freedoms. We keep driving and head further down the coast to find somewhere to do a beach and ball session for the boys before heading back for a beer and food session for us (outdoors of course) at the Black Swan. They brew their own beer and do a nice Meze but are sadly then closed until Friday when we return.

On Monday we do an earlyish morning 5k run down to the local Castle and back, followed by L raiding the local second-hand bookshop then a full English at a nearby café. Then we drive to Dalby Forest, just six miles away, for another 5k but walking this time.

That evening we eat the Bay Horse which has less interesting food and only ok beer – Black Sheep Bitter and Bradfield Farmers Blonde, which are the least interesting beers that those two interesting breweries do. 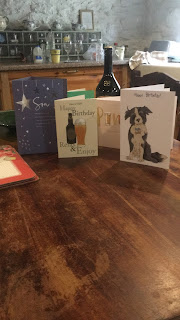 Tuesday sees a trip to Scarborough and Filey on my birthday while Wednesday is a trip to Whitby after another morning 5k run. In the evening we try the third village pub (that is open), the Rose for a drink but it is so busy that we can’t get in and the local dogs bark us off anyway.

Thursday sees our tourism continue at Robin Hood's Bay and Friday sees a return to Dalby Forest after another morning 5k run and before our second night at the Black Swan.

Then it’s time to head home on Saturday via more beach in Hornsea. Derby lose two games while we’re away, the third time in four games that they’ve lost 2-1 after going in front. Relegation could be confirmed in the final match of the season next weekend.