On Saturday L does her 200th Parkrun and I join in the revelries at Wollaton Park, running myself in a ‘not as rubbish as I expected but still rubbish’ 27:52. The Lad was not invited to join me.

On Sunday he is invited to join me as we’re at a dog show at Catton Hall. To be fair our first run wasn’t too bad but we still got eliminated. The second one however... it was clear that one of us hadn’t got their head in the right place yet. That didn’t improve as runs three and four were also eliminations. Meanwhile L is out doing our Sunday training run on her own.

Checking in remotely on the boys on Monday I see a very sad face looking back at me from the wrong side of the dog gate. I hope he hasn’t chewed the post but then looking back at the footage it was clearly the post, or rather the postman, that inspired him to jump the gate in the first place.

When I get home I see he’s tried to rip up the newly delivered Kennel Club Rule Book. If he’s trying to exact revenge for his four eliminations on Sunday that’s not really the way to do it and, in any case, the vast tomb that is the Kennel Club Rule Book is pretty much indestructible. 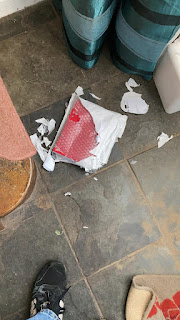 If my discovery of the day is a chewed up Kennel Club Rule Book, L’s is far more exciting as she finds someone's credit card and driving licence on her way to the pool. You can go on a right splurge with those two bits of id. However she does a bit of detective work involving social media and manages to reunite them with their owner.

The shortages at Sainsbury’s are getting more ridiculous by the week and it’s all our ‘middle class' stuff! This week no Markies, Curly Fries, coffee beans, washing up liquid, oyster sauce, stewing beef... got the last box of Soleros though.

Posted by FitForNothing at Monday, August 16, 2021