Its been seventeen months since I was waiting to hear whether Frank Turner’s gig at Rock City on 21st March 2020 was going to go ahead. It didn’t and was cancelled a few days before. Meaning I haven’t been to a gig since December 2019 which was We Are Scientists in Leicester. It’s been a long old wait and it’s a bit emotional when old stagers China Crises take the stage at a busy but not full Rescue Rooms to huge applause. It’s not really clear who’s applauding who for being here, probably a large dose of both.

Talking of old stagers, I'm pleased to say I think I’ve aged better than most people here tonight. My knees certainly aren’t the worst ones in attendance. 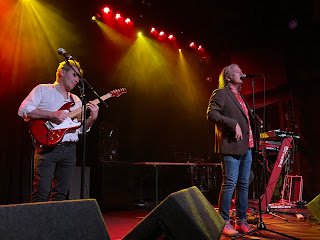 They open with the gorgeous ‘Arizona Sky’ from their seriously underrated fourth album ‘What Price Paradise’, released a mere 35 years ago but probably filed under their ‘newer’ stuff. The majority of the set is 'older', as they constantly refer to when they were 17, with a set that seems to roughly divide into two sections, ‘what they want to play’ and ‘the hits’.

What they want to play seems to be no less than six tracks off their debut album ‘Difficult Shapes & Passive Rhythms’ from 1982, I’m guessing that they wrote when they were 17, making it easily the most pulled from album tonight and way ahead of their more famous records. 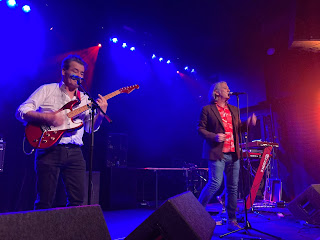 There’s room also for a newbie ‘Fool’, a youngster aged just six and a recent treat from their 2015 ‘Autumn in the Neighbourhood’ album which was their first new recording in 21 years and a B-side ‘It's Never Too Late’ which only appeared on the limited edition 12" of ‘Black Man Ray’. Which appears itself later in the brief ‘hits’ section. Sadly they didn’t have too many of such things.

Throughout Gary banters about other eighties bands, some of which may have gone on to world domination to his slight annoyance, but none of which he stresses is to be repeated on Twitter ever. 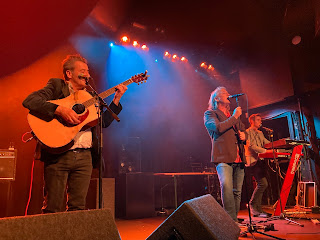 The end of the set seems to come several times but they never leave the stage. Protesting that the dressing rooms are too far and they’re up against a 10pm curfew anyway so that the Rescue Rooms can let the youngsters in.

They finally finish for good with ‘Here Comes a Raincloud’ before inviting everyone down to the oldest pub in England later. Although, as there’s some dispute about this, I’m not sure if they mean Ye Olde Trip or Ye Olde Salutation. Some would even say it’s Ye Olde Bell. So I don’t join them, as I head off to meet L in the Borlase, but I do hear they did indulge in a bit of Karaoke in the Sally. I’ll catch them next time around.

Posted by FitForNothing at Friday, August 13, 2021