On Tour In Wales

On Monday we got back from the Great North Run, then after I spend an evening in the company of the Vaccines we head off on holiday on Tuesday.

The first stop on our tour is in Ludlow, which is a place that’s been on L’s ‘to visit’ list for a long time. We are staying in a dog friendly pub called the Wheatsheaf Inn that won't feed us. Which is annoying as everywhere else is booked up. Finally we find a Thai place that will feed us if we eat immediately, which we do. Then when we return to the Wheatsheaf we find it is almost empty, so who knows why they turned down the money they would have got from feeding us.

On Wednesday, we move to Carmarthen for a couple of nights where we stay in the Ivy Bush Royal Hotel which does happily feed us. There is also a nice pub across the road. We undertake a coastal tour down as far as Tenby the next day before returning for a meal booked at a rather nice local restaurant called Warrens. 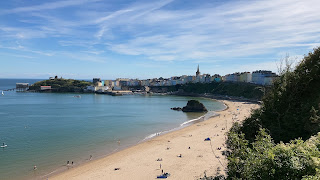 One thing we notice in Wales is that mask wearing is still very much a thing and compulsory in shops. In addition a lot of cafes aren’t allowing you to eat in or in some cases even eat out in their outdoor areas although pubs don’t seem to be bothered at all where you eat, in or out. We are however powerless to free the anti-mask squirrel who gets trapped in one of the shops overnight. 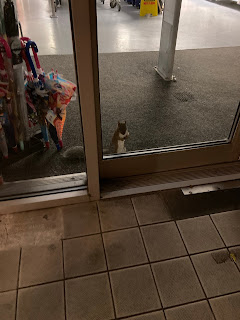 On Friday, we move again and drive up the coast to a cottage we have booked for a week in Llan Ffestiniog which is next door to the more famous Blaenau Ffestiniog. With not much available locally, as everywhere seems to have shut down, we eat in with a sausage and pasta dish which was about all that was available in the local shop. Whether the shut downs are due to Covid or date to before the pandemic, I’m not sure.

The cottage is on four stories with the bathroom at the top, then the bedroom, living room on the ground floor and then kitchen in the basement which also opens out onto a small garden. There’s one problem, for MD at least, and that’s the highly polished and steep wooden spiral staircase. After a few initial slips the Lad soon gets the hang of and is bombing up and down with ease but MD hates it, can’t get any grip, and has to be carried unceremoniously from floor to floor all week.

On Saturday, we do a Parkrun because you don’t you (at least in our house). Unfortunately Pont y Bala doesn’t allow dogs, like many Parkruns in Wales don’t seem to and like almost all North Wales beaches, so both dogs have to wait in the car. Also, sadly it isn’t on the banks of Lake Bala despite said lake being also being within spitting distance of where we are. We are instead asked to run two out and backs on a footpath, which looked incredibly dog friendly to me. So not the greatest of Parkruns and this is perhaps why just 53 people turn up.

We then do visit the lake and watch The Big Bala 9k Swim before heading back to the cottage and another night in with Chicken curry made with ingredients from much better stocked Co-op in Blaenau Ffestiniog due to lack of opportunities for eating out. We do though visit the local pub Y Pengwern, that doesn’t do food.

Sunday sees a coastal trip to Porthmadog and Pwelhii while also taking in Harlech castle. Sadly at Pwelhii we lose one of the dogs’ balls in the sea. The Lad just watches it bobbing out towards Ireland. In the evening we finally find somewhere to eat out in the form of a small local Indian restaurant called Red Chillies which is excellent.

The next day we visit Beddgellert Forest for a forest walk but lose the marked trail almost immediately thereby turning what was supposed to be a circular walk into an out-and-back. Then we visit Beddgelert itself, which is an old haunt of ours from many moons ago before heading off to Caernarfon and then on the way back Waunfawr, were we visit the Snowdonia Parc pub (another old haunt) for a pint. Later we visit the local pub again and eat in again.

Tuesday is the excitement of bin day. It’s great to see that recycling is collected every week here and has to be pre-separated while the main bin is only collected once every three weeks. How refreshing and something like what I’ve been asking for in Nottingham for the last 20 years.

However it doesn’t appear that the previous renters have followed the memo on this judging by the amount of empty alcohol bottles we have to put out which are definitely not ours. Honest.

In the afternoon we take a ride on the Welsh Highland Railway which originally closed in 1936. After decades of wrangling, restoration was started in the 1990’s with the first section reopening in 1997 and the whole line becoming operational in 2011. They were still building it when last visited the area, which shows how long ago this was, and the section we ride from Porthmadog to Beddgelert wasn’t open. MD as usual hides under the table while the Lad spends most of the trip on my knee trying to see out of the window and panting more than the train is. Afterwards we eat at the Oakley Arms in Maentwrog. 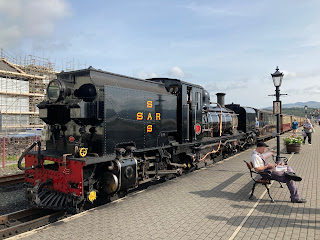 The next day we visit Barmouth for beach and ice cream, although there has been plenty of both over the last week. MD gets a new ball to replace the one we lost one in the sea. It’s about four times the size of the old one and he’s loves it. Then we return to Red Chillies for another curry in the evening.

Thursday sees us walking in Betws-y-coed without getting lost, then a visit to Swallow Falls and the pub opposite it. After a visit to Lamberis we head back and visit the local pub again before eating in again with a bottle of Welsh wine. 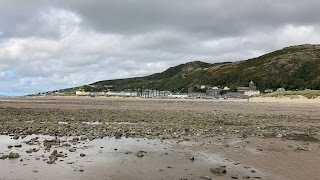 On Friday we move on and head towards Anglesey where we will stay for two further nights in the Valley Hotel in a place called Valley. On the way we stop off at Bangor where we visit Bangor Pier (who knew?) and Holyhead, the once thriving port whose impressive road links are eerily quiet post-covid, post-Brexit. Both our nights on Anglesey we eat in the hotel.

L finally goes in the sea after prevaricating about it all week. However her hope that the Lad might join her are dashed as he seems terrified at the thought. Clearly he takes after me on the swimming front.

Saturday is (of course) Parkrun which we do at Newborough Forest which not only is an outlier in Wales in that it allows dogs but it also has a dog start and attracts 139 runners. It’s a great one lap course which is perhaps similar to a local of ours at Sherwood Pines.

Then it’s time to travel all the way home via a shopping trip in Conwy and after filling up with fuel. Apparently why we’ve been away a shortage of HGV drivers combined with ridiculous panic buying has caused petrol shortages and more than half of petrol stations are out of fuel.

Posted by FitForNothing at Sunday, September 26, 2021