The Vaccines (No Not The Covid One)

Tonight's it's another of those 'free' gig when you by a band's new CD courtesy of Rough Trade who normally host these things upstairs at their shop. Clearly hosting the lively Vaccines crowd there wasn't deemed a good idea. Which is why I am at Nottingham Trent Students Union aka The Level for the first time since 2006 (The Automatic since you ask) and only the second time since 1995 (Belly since you ask). It has had not so much a refit as a rebuild since then e.g. it is brand new building. 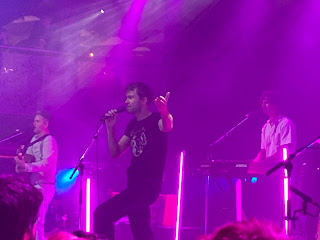 The gig itself space is impressive, quite long and thin with a long stage and a good sound system. That the band with probably the most googled name on the planet, well what do you expect in a pandemic, is my second gig back after venues reopened and my first to be rammed full is perhaps fitting.

There is no support band (unless they were on really really early?) which sees everyone simply milling around for a considerable amount of time before the band come on at 9pm. 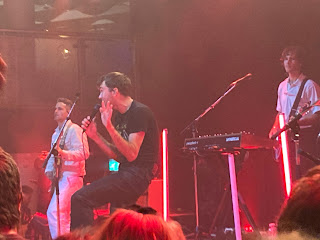 They open with Wanderlust from that new CD 'Back to Love City' and all hell breaks loose which is quite an achievement for a new song that not everyone will know but then, this is probably so many folks first gig back after a long time denied them. Clearly lost time needs to be made up for.

The opener is is quickly followed by the much more widely known favourites, 'I Can't Quit' and 'I Always Knew'. Cue even greater mayhem. They then intersperse material from the new album will plenty of other favourites along the way. As is the way these days multiple tracks from the new record have been trailed ahead of its release as 'singles' and tracks such the likes of 'Headphones Baby' and 'Jump Off the Top' are already well known by a lot of the crowd. 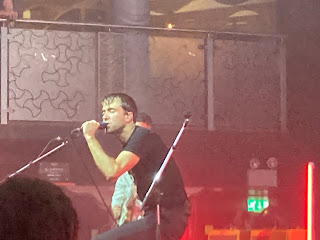 As usual they round things up in around an hour and that includes returning for an encore of 'Wreckin Bar' and 'All in White'.

They are excellent as always. It's good to have them and music back.
Posted by FitForNothing at Monday, September 13, 2021