We are back at home for the weekend because we were looking forward to a fairly eclectic weekend in Birmingham. Tears For Fears had scheduled a gig at the conveniently central NIA so that we could both revisit our youth (or earlier youth, as obviously we’re still in our youth) but then they cancelled. This had ruined our meticulously planned weekend which included Birmingham by train, a hotel and the next day, for L, the Birmingham 10k.

What’s worse the rescheduled date is in midweek next year and at the hopelessly located NEC, not helpful. I did try to swap the tickets to another gig but they are all as good as sold out and we had really good seats at the NIA.

Anyhow we still go ahead with the rest of the weekend and have a great time. We even get to walk the 10k course ahead of the race by strolling out to the MAC (Midlands Art Centre) to see a film.

Funny Cow is about a stand-up comedienne (Maxine Peake) taking on the men at their own game in the dingy working men’s clubs of the 1970s. It is in one such place in the north of England where she sees the depressive Lenny (Alun Armstrong) up on stage, going through the motions with his dire material, and effectively dying, that inspires her in the first place.

When she talks to him about his act, he assures her that ‘women aren’t funny’, and suggests she tries singing or stripping instead but it is comedy that she wants to do. Comedy is a release for her from her miserable life. 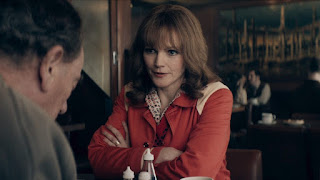 From a childhood living with an abusive father (Stephen Graham) through to a dysfunctional marriage to the violent and controlling Bob (Tony Pitts) via a mother (Lindsey Coulson) driven to drink by life. 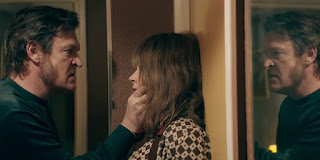 Finally leaving her husband and taking up with bookshop owner Angus (Paddy Considine), who takes her to see foreign films which fall way outside her comfort zone, turns out to be not that much of a trade up.

Meanwhile she struggles to gain a foothold in the world of the gungy pub carpet. She suffers from terrible nerves when she attends an audition where she is up against a singer (Richard Hawley), a ventriloquist (Vic Reeves) and an Elvis impersonator (John Bishop) with his dog (Bilko). 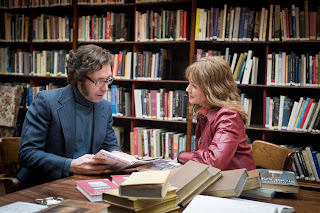 Eventually she blags her way on to stage when the promoter has little choice when faced with an empty stage. There she finally gains acceptance, and later success, but only by winning round the hostile audience by embracing the 1970's reality of doing racist and homophobic gags, while dealing with the inevitable hecklers. 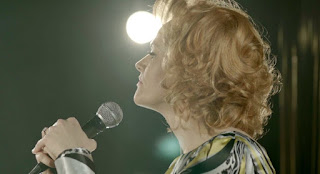 In the film we see her after her success, then before, then after again in series of Dave Allen like scenes in front of the camera. Scenes that for me distract from the narrative of the film and therefore drag down what was a generally strong film.

The later scenes seem to show her just as cynical and disillusioned with everything as she was before she became a comedienne. Even being a success doesn’t appear to have brought her any happiness but then she probably never expected it to.