Monday, which is a Bank Holiday, is what you could describe as a busy day.

First L, Daughter and I get the 6:30am train down to London. We are heading to the Vitality 10k run in Central London. On the train, which is largely quiet, are several fans already getting tanked up ahead of Derby’s Play Off Final with Aston Villa. Yes, I’ll be there later, but not tanked up.

L has suggested not taking the tube to the race village in Green Park but jogging there as a ‘nice warm up’. It's 3.5 miles! and I’m not sure she’s mentioned this to Daughter. We take the tube. At Green Park we meet up with L’s sister, who is also doing the run, and with her family.

The race starts on The Mall and takes in quite a few sights of London (Trafalgar Square, St Paul's, The Bank of England, House Of Parliament, where Daughter went for her interview at Somerset House) before finishing in front of Buckingham Palace. Although we finish before it, not after it like they do in the Marathon.

I finish in a disappointing 47:05 and then head back up the course to cheer in first Daughter, then L and her sister, who are running together. I have a different start time to the others, so get a head start on them.

After a sandwich, a coffee and quick clothes change in a portaloo I’m off to Wembley for the match. While everyone else, apart from L’s sister who is my partner in crime at the game, head off home. 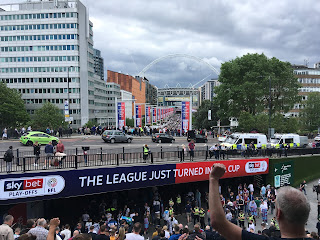 At Wembley I am rather shocked, but pleasantly surprised, to find a real ale stand. We have a quick drink and it does have to be a bit quick as we’re running late. Then we take our seats five rows from front.

I am totally relaxed about the match as I’m not particularly keen for Derby to go up where no doubt they would once more fill the side with ageing relics and crap foreigners like they did on the last two promotions then spend the next ten years paying them all off but what will be, will be. 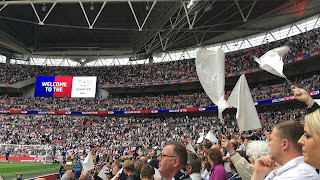 The way Villa play in the first half that doesn’t look very likely anyway. Villa score at the end of the first half and then again early in the second. Derby finally get their act together and pull one back but it finishes 2-1 to the Villa.

Mostly though everyone is pretty pleased with the season and with Frank Lampard. Subsequently the team get a fifteen minute standing ovation at the end. That’s not something I’ve seen before in defeat. Lampard has turned out to be exactly what we all needed and has been a breath of fresh air. He has not only brought a calm, professional approach to the club but also an infectious enthusiasm that has rubbed off on everyone. More than anything though he’s united the team and the supporters, something that's been missing for years, probably since the Jim Smith era. On top of that, he’s given us two glorious cup runs and late run up the league table all the way to the Play Off Final. I just hope he’s still here next season.

While there isn’t a dissenting voice in Wembley or on the train home, the alternative universe that is Social Media World is a different matter entirely, as I found out later. In that world things have been interpreted very differently but the who cares what the armchair experts think.

Later was quite a bit later due to the utter chaos at St Pancras. Thames Link were using two of East Midland Train’s four platforms due to maintenance work on their own platforms and to make matters worse all the trains were single locos rather than the usual doubles because it’s a Bank Holiday. The staff said they didn’t think it would be busy... despite the fact they’d emailed me in the week, saying it would be busy. They quickly start coupling up extra locos.

So there’s a huge disorderly queue where reservations were not being honoured and all the Nottingham trains were being rerouted to Derby. Helpful for many but not for me. I hop off at Long Eaton where I have to wait a further 30 minutes for a Nottingham train.

I’m ready for a big V no T when I finally get home.