L is back at work on Monday but, by her own admission, just mindlessly Googling while seething because the Swimming Pool was closed this morning. The leisure centre was open but with no pool to supervise the staff were just sat around chatting. If so they could have just moved their chat to the pool side they could have opened up. As a consequence L and her swim buddie had to sit and chat themselves over a coffee.

Those absolute darlings at Sky TV have deemed to give us no daytime home games over the entire Christmas and New Year period. So there's no holiday cheer there then. Instead we have evening games on Monday and Thursday this week, which is the first time I can recall us playing twice in the same mid-week since the 1980’s when we were playing catch up from a particularly bad winter. Maybe it suits us as we win both games.

On Tuesday I bike into work while L runs 7k because the pool is still shut. She says her run was muddy. So either she went on the park or went for a jog round our garden.

My online running club send me a graphic illustrating my achievements for the year and even I’m impressed with myself. I've only been uploading my data since the start of November but a 5k time of 20:16 and a half marathon of 1:41:07 are pretty good. However the less said about my 10k time the better. 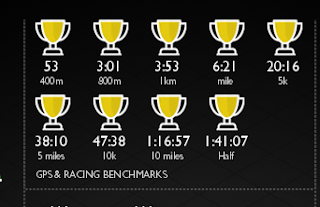 I finish work early on New Year’s Eve which means L and I head into Nottingham far too early. I worry about us peaking too soon as we hit the usual bars in Canning Circus with the aim of eventually ending up in the Market Square at midnight to see in 2020.

We manage to last the distance, so get to watch the fireworks off the top of the Council House and join in the communal celebrations. Which are a little bit fragmented and muted due to the whole ice rink thing hogging the Market Square and getting in the way somewhat.