Derby keep their unbeaten run going with a very late equaliser in a 1-1 against local rivals Nottingham Forest. It comes so late that apparently one Forest supporter had already chucked himself in the canal in celebration.

In the evening we watch (well, I did) a film about Joan of Arc in French with subtitles with 50% of the rental price going to Broadway Cinema.

It is 1429 and the Hundred Years War between France and England for the French throne had already got over one hundred years von the clock. Believing herself to be chosen by God, Joan of Arc (Lise Leplat Prudhomme), leads the army of the King Charles VII of France.

In the aftermath of several victories including the lifting of the siege of Orléans, Joan was eager to continue her mission of killing the English but the French King was less keen. He was pretty much happy to settle for what he'd got, leaving Joan and her followers basically standing around in a sand dune talking long windily about what they'd rather do. The budget was clearly not that great.

One would perhaps have liked to see a spot of medieval warfare at this point but there is none or indeed a bit more background on the situation in England and France at the time but it is assumed you already know this. Instead the film leaps to Joan’s capture, imprisonment, and trial by the pro-English nobility on charges of heresy. 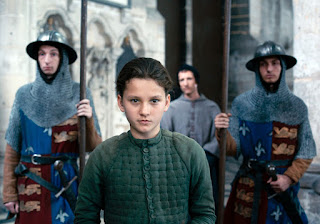 The scenes of her trial in Rouen are even more long winded than those in the dunes, as her accuses constantly try to force a confession out of her while she constantly refuses to deviate from her line that she is God's chosen one.

This stalemate produces an endlessly slow crawl to the conclusion that we all know is coming and it is only sort of broken up by the occasional surreal musical number and some deadpan comedy by the two guards outside Joan’s prison cell. A cell that looks like a concrete bunker left over from World War II and probably is. 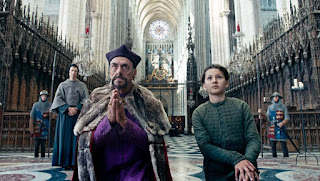 The idea of the film is perhaps to highlight the preposterousness of it all, with a lead actress who looks about twelve not only leading an army but being on trial by the French state. Not too sure why it had to be done in such an alienating style though. It’s an experiment that I think I wished I hadn't been part of and perhaps invites comparisons with being burnt at the stake. Comparisons that I won’t make.
Posted by FitForNothing at Saturday, July 04, 2020