Garmin's servers have been down since Thursday after an alleged Ransomware attack and their services are only just now coming back online. That is for some people but clearly not for me. I’ve recently received a replacement watch from Garmin but I still can’t use it. Well, I can use it but the data's not going anywhere. A bit like my training really.

The London Marathon still fails to make a decision on whether to go ahead on their new date of  4th October or not. They are allegedly still working on how they can socially distance the race. Give it up guys, it's not going to happen.

Anything London can do, Brighton of course can top it. Especially for vagueness. Brighton send out an email admitting that it is not feasible to stage the marathon 'as we had hoped', yet they tell us they are planning to stage 'part' of the Brighton Marathon Weekend in a 'unique and revised socially distanced, COVID-19 compliant format'. They just don’t say what...

It’s as clear as mud and their Facebook page is instantly on fire with abuse. Both races should have sorted all this out months ago.

Tennis goes ahead on Tuesday with the Tennis Centre now back open and the booking system reverted to the long winded rubbish one. I have spent most of the week watching the Battle of the Brits Team Tennis tournament which has been awesome but doesn’t seem to have done anything for my own game. The match itself turns out to be possibly the windiest of games ever.

As all the Council’s Leisure Centres start to reopen, they announce they won’t be taking any membership payments until 7th September. So everything will be free until then. No wonder they’re asking the Government for more money.

L and Daughter go out on a run and prove that Green's Windmill is not a hoax. It does actually exist. We’ve been in Nottingham all these years and have never seen it. 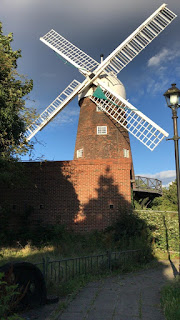 On Wednesday Bosch send out an engineer to look at our useless new vacuum cleaner. The chap unblocks it with a nifty gadget that doesn’t come in the box, then checked the motor and proclaimed it fine. He wasn’t very interested when I showed him how poor the suction was even after he’d unblocked it. Instead he told me to return the machine to the retailer, who isn’t interested.