Derby County lose again and slump to bottom of the league. With the pubs closed I can't even go out to drown my sorrows. So we stay in and I rent a moody British film called Make Up which probably doesn't help. It was made in Cornwall and rented through BFI Player\Broadway Cinema.

Young Ruth (Molly Windsor) get more than she bargained for when arrives at a windswept caravan park in St Ives as the season draws to a close. Her boyfriend Tom (Joseph Quinn) works there and the caravan park's manager Shirley (Lisa Palfrey) takes Ruth on as well to assist with the winter maintenance. 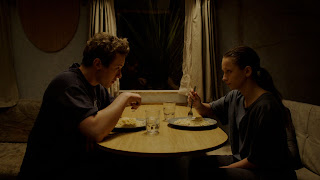 Although initially pleased to be with her boyfriend, things start to go wrong for Ruth when she finds strands of red hair in their bed and lipstick on the caravan’s mirror. With Tom regularly disappearing for long periods, supposedly working, she suspects he is having an affair but she doesn’t know anyone with long red hair. Let alone someone who is seriously moulting. Perhaps he’s secretly hiding a Red Setter or an Afghan hound? When she goes for a shower and hears someone having sex in the next stall, she suspects it's him and his mystery woman. 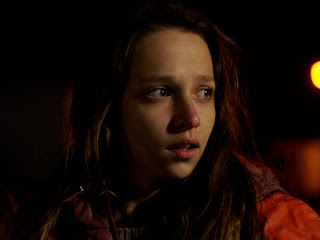 With Ruth also seeing things around the park, like things inside caravans that are supposed to be empty, and also confessing she is scared of the sea and cannot swim, there is a sense that something awful is about to happen.

What does happen is she finds a friend in Jade (Stefanie Martini), who is a fellow park resident, and who offers Ruth a makeover. Ruth doesn’t suspect Jade of having designs on Tom but quickly realises that she might have designs on her but initially she’s far from keen. 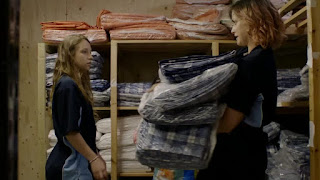 It’s an odd film, a relationship drama but one where we never really get to know the main character so never really understand her insecurities or for that matter are convinced enough by her relationship with her boyfriend to care if she runs off with someone else, male or female.

Its plus point is its wonderful atmospheric setting of an out of season caravan park with its motley collection of residents.

Posted by FitForNothing at Saturday, November 07, 2020