Sunday is our third run in the Nottingham Six Pack Challenge, this time it’s the ‘Trentside Trundle 7K’ from Stoke Bardolph. L runs it while I walk with both dogs and she then runs back up the course to meet us. Of course we get lost again but the good news is my knee is at last showing some signs of slight improvement.

A good test of our new TV is the film Possessor which is streamed from Broadway Cinema via Modern Films. It is directed by David Cronenberg’s son Brandon and it certainly shows influences of his father’s work.

Tasya Vos (Andrea Riseborough) is employed by a company that offers remote assassinations. Basically they kidnap and drug someone who has access to the person they want to get rid of, imped a microchip in their skull and then allow one of their staff to take control of their mind and body via super-bluetooth (or something). Just like a computer game. 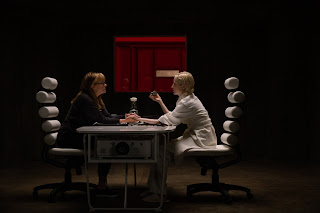 Tasya is the company’s top assassin but she's been working too hard and needs a break from her job. Too many long hours, killed too many people, you know how it is and she’s begun losing touch with own life. She’s so used to being other people, she has to rehearse being herself before she goes home at nights to her husband and son. She isn’t going to get a break though because her boss (Jennifer Jason Leigh) needs her for the biggest job the Company has ever had.

Her next job to take out John Parse (Sean Bean), the CEO of some mega company, along with his daughter Ava (Tuppence Middleton) using her boyfriend Colin Tate (Christopher Abbott) as the weapon of choice, making it look like some massive mental breakdown on Colin’s part. This is at the request of Ava’s step-brother who would gain by inheriting the business. 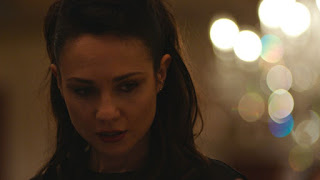 The assassination is only a partial success as Colin seems resistant to being fully taken over. Ava is killed but Parse escapes. When Tasya attempts to cut her losses and flee by forcing Colin to shoot himself she finds that she can’t make him do it.


Meanwhile a shocked Colin cannot understand why he’s killed his girlfriend or why he is suddenly getting memories of another person life, that of Tasya’s. Confused, he kills a friend of his before tracking down Tasya’s family and confronting her husband at gunpoint, demanding answers he isn't going to get. 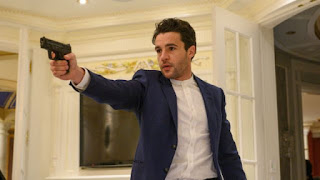 Personally, I was disappointed that the film drifted off its more straightforward assassination plot line and into everyone’s weakening grip on reality. Something which vastly accelerated the body count and where it’s not always entirely clear what is going on and who was in control of who.
Posted by FitForNothing at Sunday, November 29, 2020