The day finally dawns, that is if 4am is dawn? I pile all my kit into the car and get my WAG to tattoo me. It seems a bit of a waste to me, as I’ll be putting a wetsuit over the top of them unless they’re just for bragging purposes in the pub afterwards.

As L applies the number 622, not quite the number of the beast, to my arms and legs she reassures me that it’s only in case I drown. She’s just jealous; she only ever had numbers in felt tip pen.

By 5am we are on our way, taking the short drive to the National Watersports Centre at Holme Pierrepont, recently rebranded Holme Pierrepont Country Park. They have segways now you know.

Twelve months of planning and six months of training has lead to today. Six months of injury disrupted training that is. The swim training had gone as well as it could have done for a reluctant swimmer like me and I am now capable of swimming 80 lengths of a 25m pool in one go, without stopping and without drowning. That’s some achievement.

The bike training has also been fine. 100 mile sportives have never scared me, so a 56 mile ride was always going to be a doddle and is sure to be my highlight. It has been my preferred discipline, the run, which had failed me. I had hoped to be popping out regular half marathons by now, as I was in my youth (a year ago) but knee, thigh and calf niggles has really kept my training down, so the run will be tough. 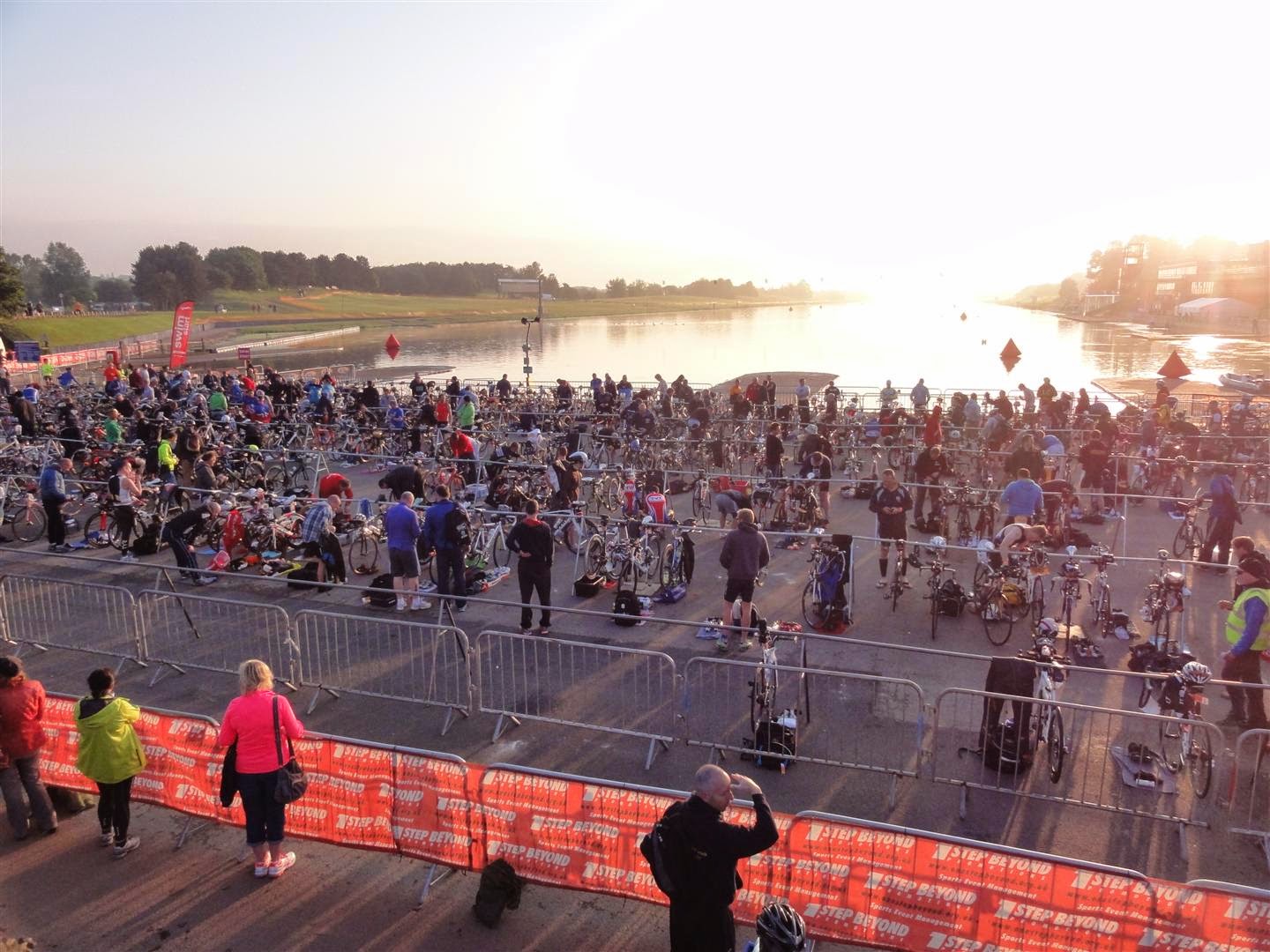 I rack my bike in the transition area and lay out the rest of my kit in readiness. Then just as I get head off for a last minute loo break, my Dad turns up nice and early. He’s got a surprise coming. L has had t-shirts made for the two of them, professing their support for me. I feel honoured.

Today I manage to put my wetsuit on the right way round, unlike at Peterborough. So that's a good omen and also because taking it off again might have taken those fetching tattoos off with it. Then I’m in the water realising, as predicted, what a long way it seems to the orange buoys marking the turnaround point. 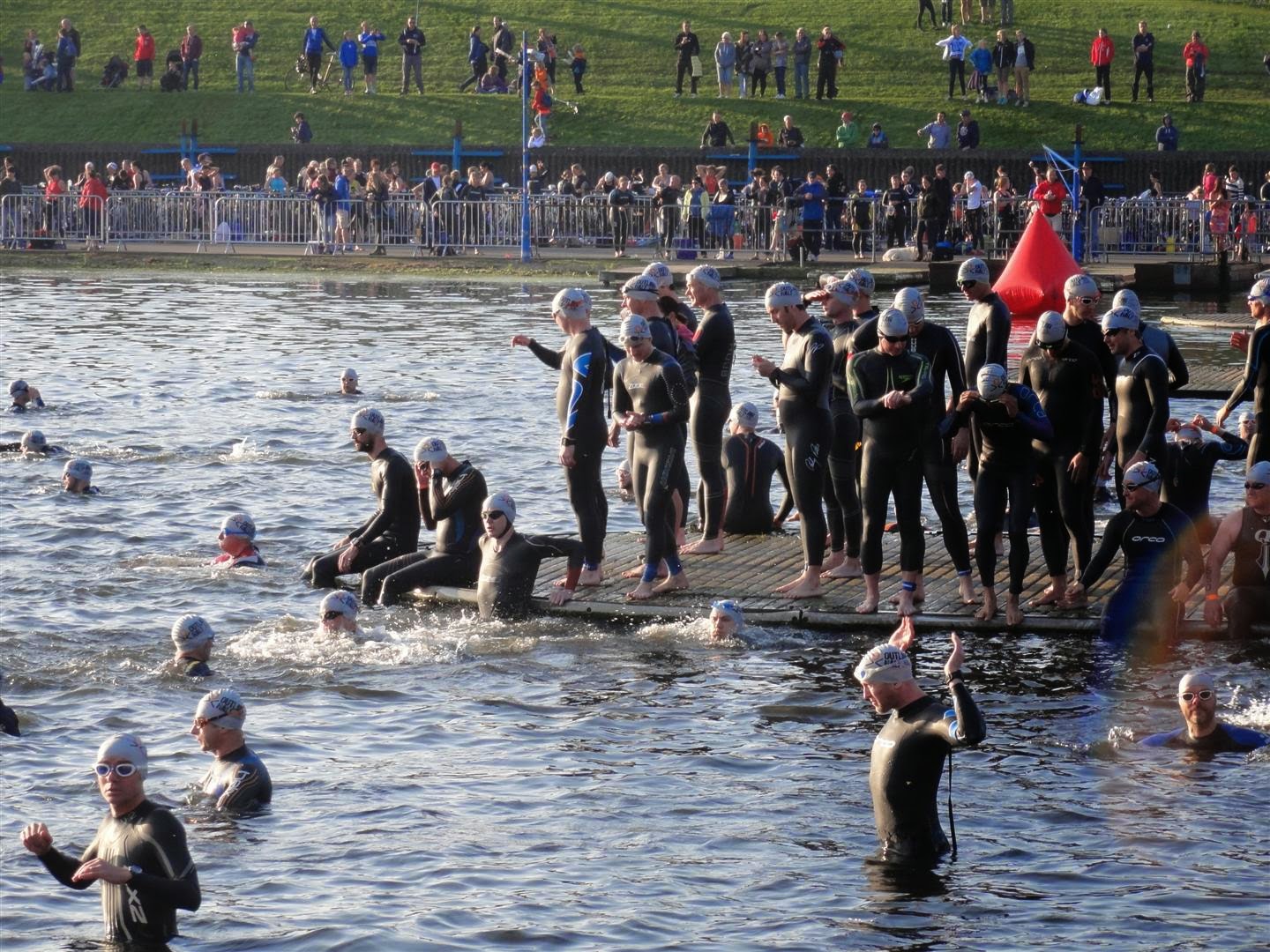 With the first wave already gone, it’s only minutes now until us number two waves are off. We were then instructed to wave to the crowd on all three sides. I nearly drowned doing that and afterwards the race in comparison seemed a bit of a breeze. The water proved to be much warmer than at Peterborough and I managed to get my front crawl going straight from the off without any need for any bouts of doggie paddle. 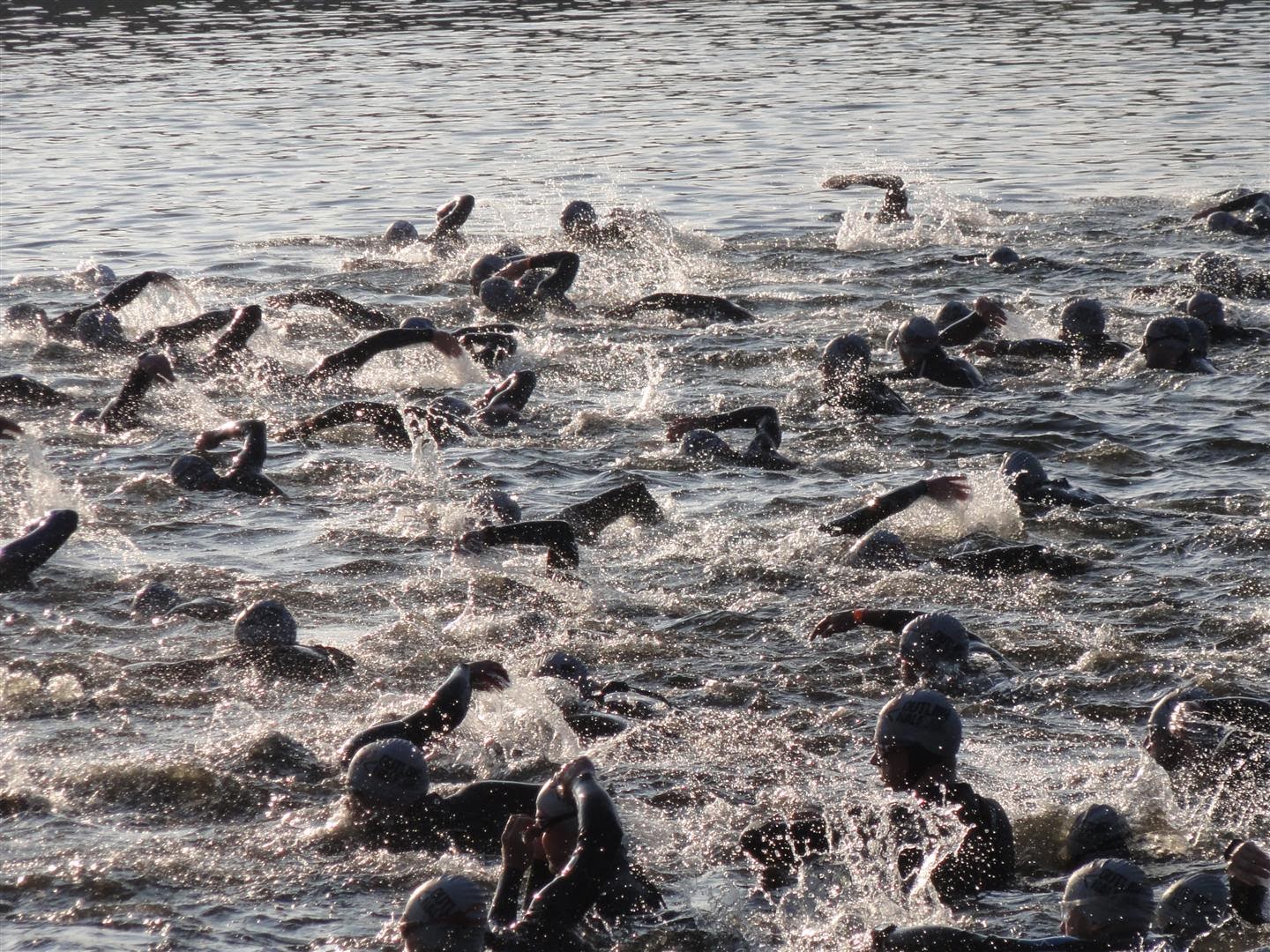 It was mad though. There were 300 of us in each wave, which meant bodies everywhere. I was so hemmed in by swimmers to my left, right, back and front, that I simply had to hold position where I was. Which I think helped my pacing no end. Before I knew it I was banging my head on the orange turnaround buoy and heading for home.

Then, sooner than I expected, I exited the water and realised that the swim had gone surprisingly well. I had taken just 39 minutes. Wow. My best swim by some distance. 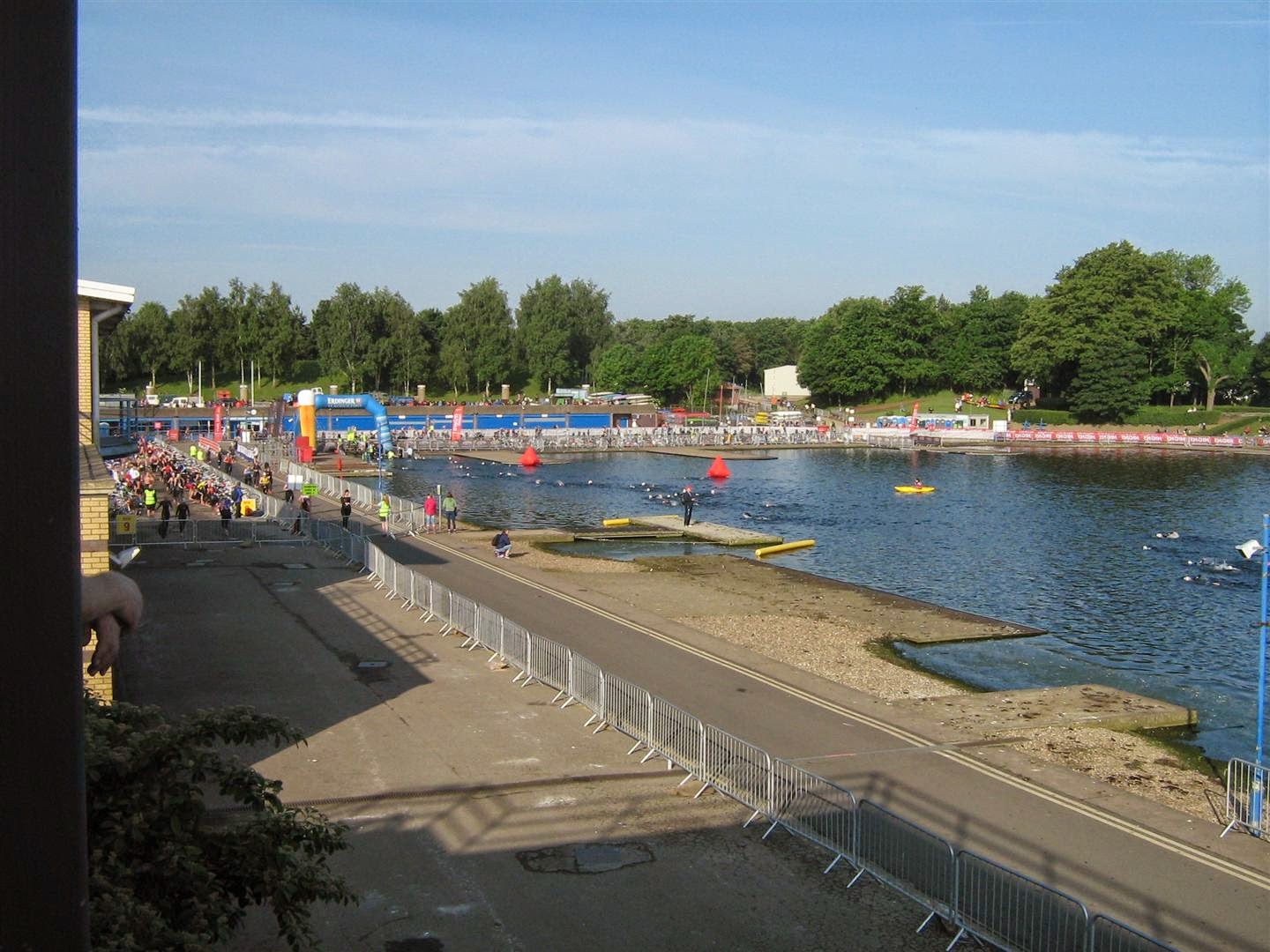 A slow four minute transition followed as I donned long sleeves, gloves, socks, shoes, helmet etc before heading out for a lap around the lake on the bike before reaching the open road.

There was already a worrying steam of expensive carbon flying past me. Worrying for two reasons really. Firstly if it continued I’d end up last and secondly... had I really swam faster than all these people?

The bike section was really well organised. Many side roads and junctions were totally closed off, red lights were switched off and where there was traffic it was held back my men in yellow jackets with stop/go boards. You really never had to touch your brakes.

I did have three problems though. One. The no drafting rule, which was completely impossible to obey when you have 1100 bikes travelling practically nose to tail. Two. My bike computer which was being incredibly annoying clanging away against the frame of my bike again but I wasn’t going to stop to fix it. Note to myself, get something better. Three. I was bursting for the loo.

That one got solved at the first feed station after 21 miles. They really had thought of everything at the Outlaw Half and had even provided a girlie to hold your bike for you whilst you went for a pee. With that issue resolved, I settled down onto my aero bars and went for it.

My nutrition plan worked, I think. I ate every ten miles. Taking on one caffeine gel, one normal gel and a chunk of L’s notorious fruit cake. It’s a bit heavy on the alcohol but it seemed to keep me going.

The route’s only real hill came at Oxton and this was the only time I changed down off the big ring. It was also at this point that the lead women caught me, one of them singing ‘If you're happy and you know it clap your hands’ as she went past. No. I don’t think so.

At 38 miles came the second feed station and my first experience of the bottle drop on the move, as I loo stopped at the first one. You lob your old bottle on the grass and then grab a new one off a helper. Doddle. That is unless you are still the bottle into your bottle cage when someone else offers you some gels... You hurriedly attempt to grab the gels but drop them and bend your thumb back against your own handlebars in the process whilst almost going over the front of the bike. Like I did. After an impressive recovery I carry on but I'm no longer able to put any weight on that hand.

I had planned to complete the bike section in about 3:30 but did it in 3:05. Wow again. So I was at least half an hour up on schedule and I also felt pretty good as I changed into my running shoes and headed out onto the run course.

The run was a two lap route around the lake and along the river path to Lady Bay Bridge. The original plan was for a two hour half marathon which would bring me home in under 6:30. I had now worked out that I was so far ahead of schedule that I could now run a 2:10 half and break bot 6:30 but 6:00. Easy.

After the first lap I was even further up but the legs were fading fast. I knew I had time in hand, so I could walk a bit, which I did after each feed station which were roughly every mile. At each one I would grab two cups of water, one each for the head and for the stomach. Occasionally I’d have a little High 5 as well or maybe a gel but I didn’t have many, I had eaten loads on the bike and felt a bit over stuffed. 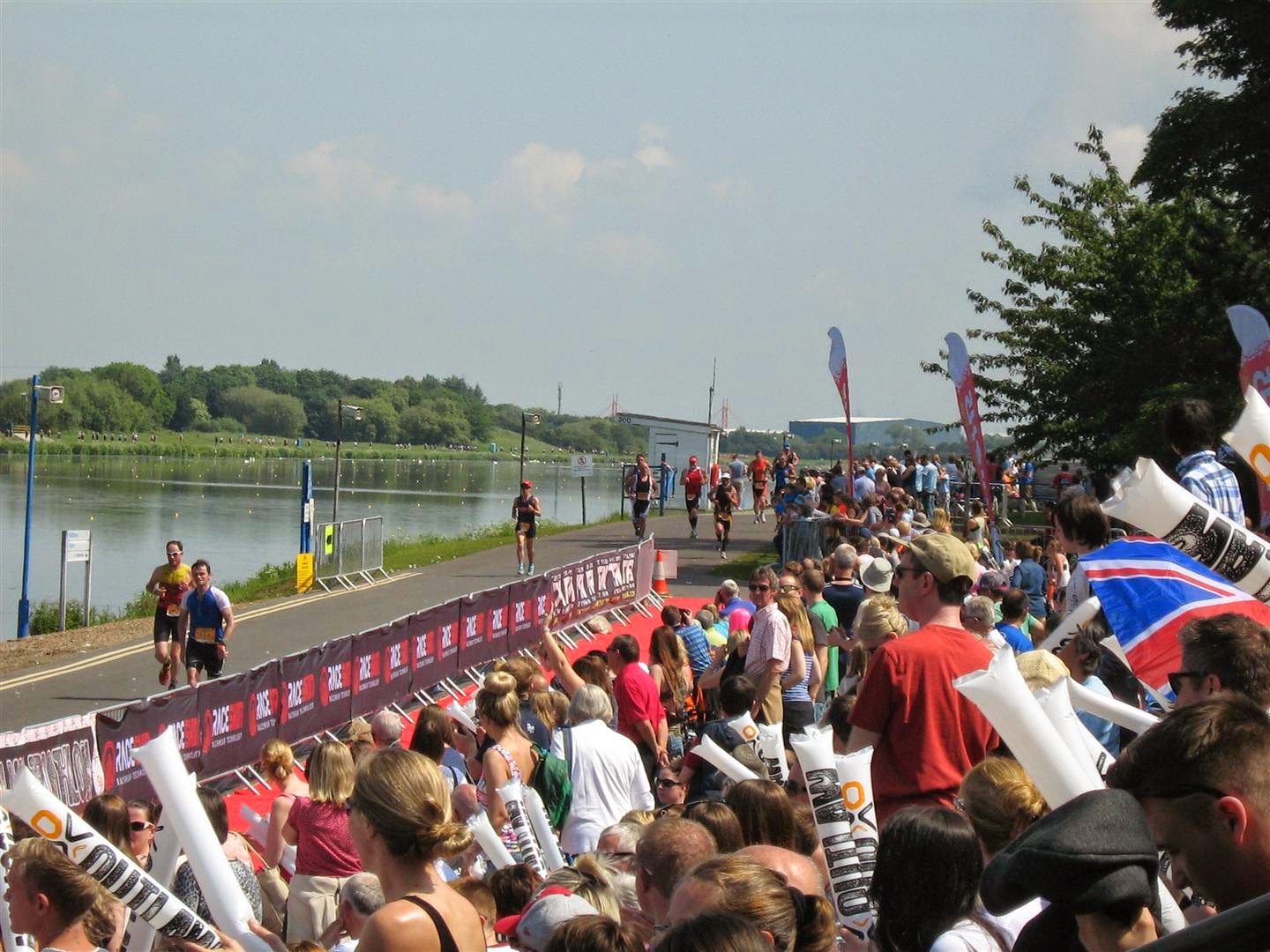 Then I rounded the final corner of the lake and headed for the finish, stopping briefly to snog my WAG and the boys on the way. Entering the finish, I high fived several people I’d never met before, finally crossing the line arms aloft in five hours and 52 minutes. Gimme that medal and the T-shirt. 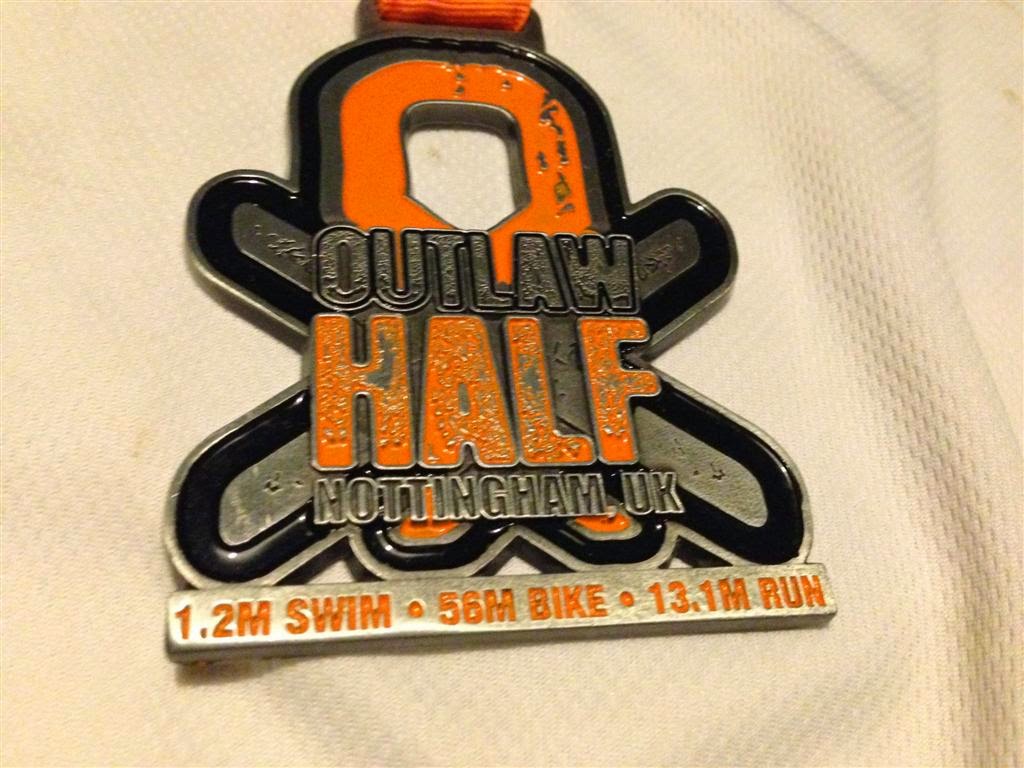 The only blip in the whole excellent organisation was that they had ran out of water at the end, I had to have coke instead and another AF beer, which they were handing out again. You then rather cruelly have to negotiate a flight of stairs before you are offered food. Which I couldn’t face anyway, although I did go back for some later. I needed to lie down and found a patch of grass somewhere I wasn’t supposed to be. Everyone checked if I was ok but no one moved me. 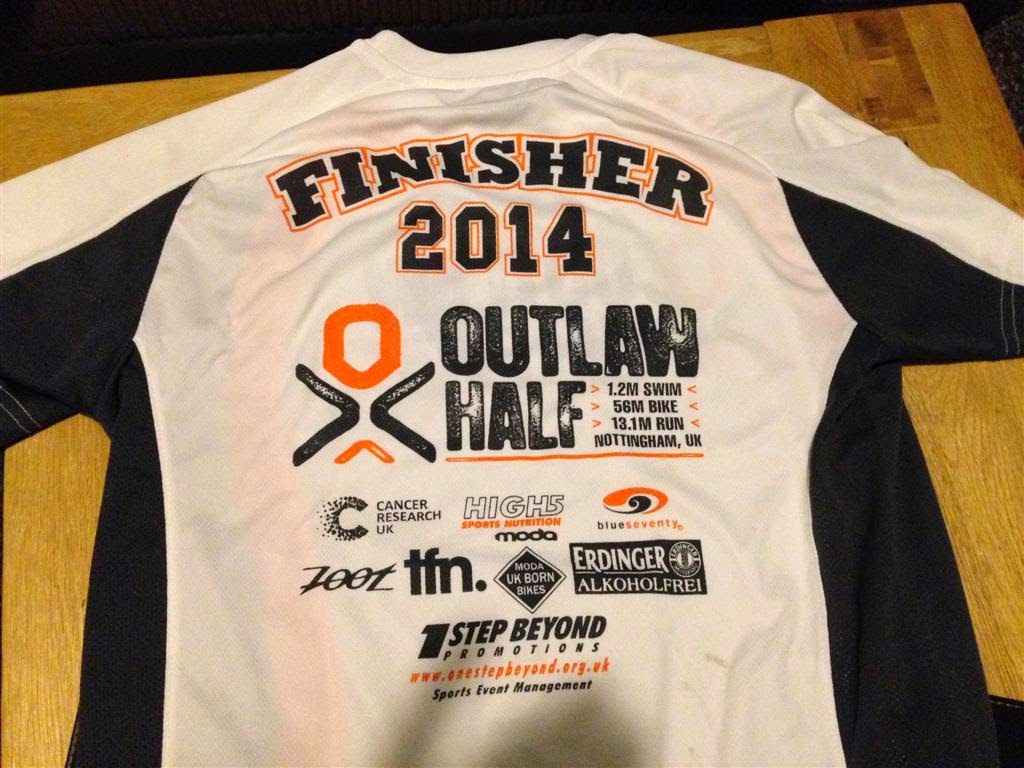 After a while I went out of the finish compound to find L, the boys and some shade. The only patch of which they had inconveniently placed at the top of some banking, which I then had to practically crawl up.

I recovered eventually, we even found my father, watched a few others come in before heading home for a well deserved hot bath and to thank my WAG personally. The tattoos seem permanent by the way; at least they don’t come off in the bath.

At night, we head into town (by bus) to the Falcon, the Hand and Heart and a curry at the Laguna.