No Wonder Sundays Are Tough

I run the Forest Fields parkrun this morning with MD while L rests her injured back and marshals. She shows remarkable restraint and doesn’t heckle us or try to trip us up. We don’t have a great run as I’m carry around last night’s fiery hot curry while MD must be carrying the entire contents of his water bowl as he stops five times to lighten his load.

Afterwards we go for breakfast in the park's café and then L pops into the one on Gregory Boulevard where she met Daughter the other day. Daughter’s interview folder has gone missing but they say it’s not been left there. Oh dear.

L is then at Pilates while, after taking the dogs home and trying to get Doggo to eat, I head off to National Omnium Championships which are being held at Derby Velodrome. Olympic medallists Katie Archibald and Eleanor Barker are among the entries. Shockingly probably half of the bunch I cycle with on a Sunday night have also entered and are mixing it with them. One of them comes 5th in the Elimination Race, no wonder I find Sundays tough.

In the evening we are at Broadway with a pint of Supreme in hand for Loving. Which is based on the true story of Richard and Mildred Loving who travelled to Washington, DC from their home in Virginia to get married in 1958. The reason they travelled so far was because Richard (Joel Edgerton), a bricklayer who build their home and seemingly practically everyone else's, was a white man while Mildred (Ruth Negga) was a black woman. Unfortunately their home state was one of the remaining states that still banned marriages between whites and non-whites. 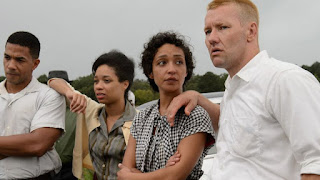 Not that getting married in another state made much difference because the local Sheriff (Martin Csokas) and his deputies soon raided their house in the early hours to enforce 'God's Law'. Presumably they were hoping to catch them having sex, which was also illegal between whites and non-whites, but had to settle for them simply sleeping side by side. When they pointed out their marriage certificate on the wall they were told that the certificate had no significance in Virginia. 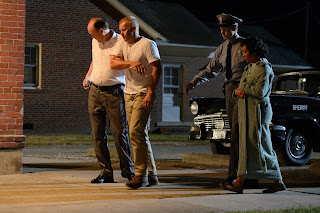 The Lovings were charged with 'cohabiting as man and wife' and pleaded guilty. They were sentenced to a year in prison with the sentence suspended on condition that they left the state for 25 years. So they upped sticks and moved to Columbia.

Richard was a quiet, private man of few words who just wanted to be left in peace to live his life but his wife was more feisty and she agrees to two lawyers, Bernie Cohen (Nick Kroll) and Phil Hirschkop (Jon Bass), fighting their case. 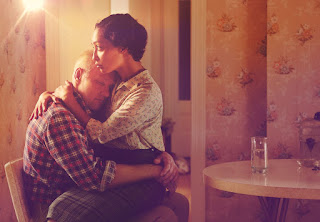 In the meantime, feeling frustrated by being unable to visit their families, they quietly moved back to Virginia where they live on the outskirts, trying to stay below the radar but clearly not too far below the radar as their situation gets featured in Life magazine which gives their case valuable publicity.

When the local courts find against them their lawyers take the case to the federal Supreme Court where the court decides that prohibiting interracial marriage is in fact unconstitutional.

Loving is an informative and pleasant film but a bit on the slow side, it inches along at times, but at least it’s not the overtly sentimental melodrama it could have been. Some more back story would have been nice, perhaps about how they met, and although the Lovings didn’t want to attend the court case I certainly would have liked to have done. Instead, in keeping with the rest of the film, the court’s verdict is delivered in a rather low key phone call to Mildred.

Afterwards we head to the Scribblers but it’s too full to get a seat so we have a couple in the Hand and Heart instead. The H&H used to be the place that was always full but everyone seems to have moved over the road to the Scribblers now. Then we finish up in the Blue Monkey.