We skip parkrun this morning as I still have a ‘bit’ of a cough and I would like to save myself for Sunday’s cycling, whereas L is theoretically banned from running completely. So instead, it’s an unscheduled lie-in.

Then L goes to Pilates while I take dogs on park with their balls, although Doggo has just the one ball chuck while MD has several. Then I go off to the match where Derby draw 3-3 with Bristol City after being 3-0 down. This effectively knocks them out of the promotion race after being knocked out of the cup on Wednesday. I bet they wished they’d took that one more seriously now.

There’s not a huge amount of choice for films tonight. Fences and Moonlight are not out until next weekend, with Hidden Figures the week after. So it’s basically T2 Trainspotting or Toni Erdmann which sounds interesting, if in German and a bit long but we give it a go.

The film examines the father-daughter relationship by way of a German comedy of sorts, when we didn’t really think such things existed. 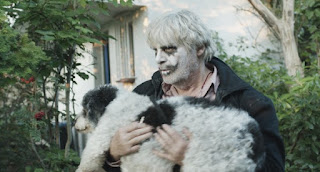 Ines Conradi (Sandra Hüller) is a workaholic businesswoman who, in her father’s (Peter Simonischek) view, is neglecting not only her family but herself too. All that counts to her is her career but he wants to spend time with his daughter. Therefore, after the death of his ancient dog, he heads off to visit her in Bucharest where she is a management consultant specialising in 'outsourcing', basically firing people on behalf of their clients. 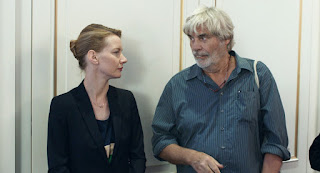 Whilst she seems efficient at her job, he quickly realises that she is far from happy with her life even though she pretends to be fine. He ends up telling a business contact of hers that he's hired a replacement daughter because his real daughter is too busy to spend time with him.

Having been shocked to see him in the first place and with not really having time to entertain him, she is relived when he is persuaded to return home after only a few days. Only for her to run into him again at a city bar while she is out with some friends. Except only this time he is in 'disguise', he is Toni Erdmann. 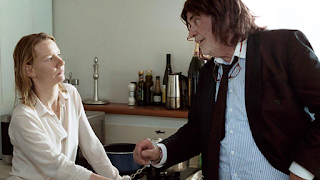 At this point, as things gradually get ever more bizarre, I’m not sure if Toni is for real or whether she has ‘Toni’, or more perhaps accurately an imaginary father, inside her head.

Either way ‘Toni’ worms his way into her life, handcuffing himself to his daughter making her feel even more trapped by life than she already feels. Yet after this, she still takes him to work with her where he tells outlandish tales to her clients and even introduces himself as the German Ambassador to Romania. 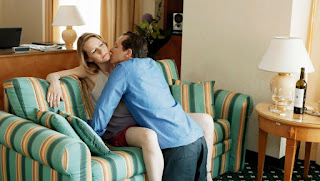 Then she throws a nude party perhaps symbolic of how exposed she feels in her job. It doesn’t really go down well with anyone except her subservient Romanian assistant Anca (Ingrid Bisu) who would do almost anything to please her boss. Even there though she cannot escape her father who turns up as a furry Bulgarian ‘Kukeri’ creature. 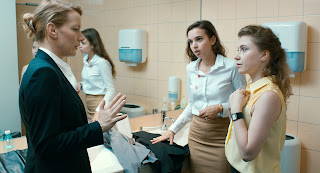 It’s certainly a different sort of film and I liked it. Now stand by for Hollywood to make a real mess of a remake.

Afterwards we end up in the Hand & Heart where they have Old Rasputin Stout before heading to the Organ Grinder.