While L and Daughter parkrun, I am stuck at home calling out the recovery people to the car who we now get through our packaged current account with the Nationwide. This meant we have dumped the RAC who have rescued us many times in the past. To their credit, they have kept us on for just £5 a year but that doesn’t include Homestart.

Our new service is supposed to be provided by Britannia but its not them that come out, it’s Burrows Recovery. The chap is clearly irked at having to work on a Saturday and quickly says he knows what the problem is but he can't fix it. However h says he knows a man who can... and gives me a mate’s phone number. Sounds a bit dodgy to me, passing on trade like that.

When I finally get hold of this mate, he says he can’t fix it either but he knows a man who can... this is getting a bit like Chinese Whispers.

This chap says that, yes, he can probably fix it and how does Monday sound. Mondays sounds like two days away to me, so I ring round loads of other people but I don’t get a better offer.

So we have no transport for this afternoon’s British Triathlon Mixed Relay Cup on the Victoria Embankment, so we walk there instead which takes about an hour.

This is a new, inaugural, event because the Mixed Relay is due to be introduced to the Olympics for Tokyo 2020. There are seventeen teams of four taking part, each comprising two men and two women. Thirteen of these were British based teams centred around their training bases e.g. Leeds, Loughborough, Bath, London, Cardiff, Stirling etc. These included a who’s who of British Triathlon, at least of all those who weren’t injury, but also enabled the Australian Aaron Royle to compete for Leeds where he trains. This also means Nottingham’s own Sophie Coldwell was running for Loughborough not Nottingham.

Jonny Brownlee was the biggest name due to be there but he was a late withdrawal. He had a bit of a sniffle apparently, the lightweight. 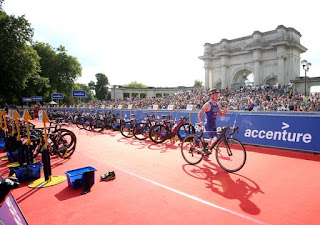 We had grandstand seats which were very good for transition and the bike leg but not so good for the swim or the run, probably the best bits especially the jumping in the Trent at the start of each leg.

The race itself consists of each team member completing a 300m swim, a 7.5km bike up and down the Embankment and a 1.5km run over Trent Bridge and the Wilford Suspension bridge before tagging the next team member who lobbed themselves in the Trent to repeat the process. Four times.

We also had a good view of the big screen which would have been useful if it had been used to show more of the race and used less as prop to get the crowd dancing. 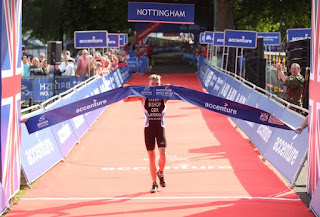 It all went down very well with spectators lining the route and it showed off Nottingham very well on TV.
It will back next year but part of a UK City series, so it might not attract so many big names. 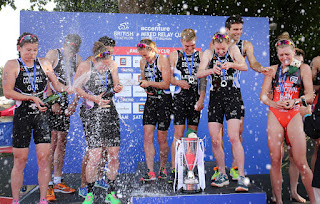 Earlier in the day there was a mini Triathlon for the mere mortals, sadly they swam in Portland pool rather than the Trent but I can fully understood why they did that!

Afterwards L talks me into crafty drink at Dispensary and then we get the bus back from town.