On the bike again and now everything aches, thankfully the calf no more than anything else, but I’m not as badly off as L.

Her boss advises her to sit back and do nothing all weekend, although she’s has just had a fortnight of doing practically nothing. It seems that going back to work that was her downfall.

Of course she kicks off her ‘do nothing’ weekend by mowing the lawn. That’s not exactly doing nothing but it desperately needed doing. MD could barely find his ball.

After which I hope she doesn’t collapse on me, as we’re at a gig tonight and one that L talked me into.

They say that old punks never die and as if to prove that statement we are at Rock City tonight to welcome back the Skids, the latest of that generation to reform. They have dabbled with minor reformation in the past but this time it’s for real, with a full UK tour to celebrate their 40th anniversary and there’s even a new album ‘Burning Cities’ in the offing.

Also still around, and from the same era, are support act Angelic Upstarts. We only catch the end of their set, so it would be unfair to comment on them really, only to say that they went down very well with the crowd. Of course there is one old punk who sadly disproves that statement. Obviously Stuart Adamson can’t be here but original members Richard Jobson and William Simpson are, along with drummer Mike Baillie who joined the band a few albums in.

As the band opening with ‘Animation’ one thing was absolutely clear, that Jobson had certainly not lost the desire to not only throw himself into every song but around the stage too. 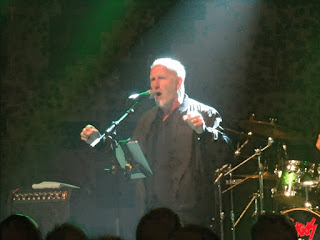 The question was could he last the distance. As he windmilled his way through ‘Of One Skin’ and ‘Melancholy Soldiers’ it was clear that he was certainly going to give it a damn good go.

Thereby followed an all-inclusive run through of the band’s singles and better known album tracks, with the likes of ‘Working For The Yankee Dollar’ and ‘The Saints Are Coming’ going down particularly well. 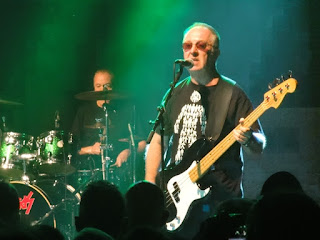 Stepping into Adamson’s very large shoes tonight was, rather appropriately, his former Big Country band mate Bruce Watson. As Jobson paid tribute to Adamson prior to ‘Scared to Dance’, Rock City erupted in a huge round of applause in his memory.

Watson had brought with him his son, Jamie, to play rhythm guitar and also to become target of a mid-set sing along of ‘Ed Sheeran is a wanker’, as he does bear a passing resemblance. 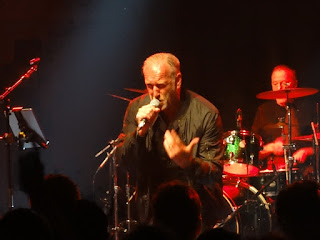 Back to the music and there was little you could think of that the band didn’t play, from début single ‘Charles’ through to the epic ‘The Olympian’ with Jobson still going strong. I was sort of worried he would collapse and I think he was too, admitting he was knackered and not quite his old younger self any more. Then he was off into motion again with another one legged scissor kick, only occasionally grabbing a sneaky rest as he delivered one of his engaging but often unfathomable anecdotes about the band.

The finale was stunning. The excellent ‘A Woman In Winter’ lead into ‘Circus Games’, then ‘Masquerade’ before they finished with ‘Into the Valley’. 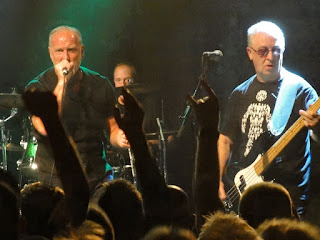 They return quickly to play ‘Charade’ and then the song that Jobson threatened not to play if anyone badgered him for it. Namely ‘TV Stars’, the original flipside to ‘Into The Valley’, revamped slightly with Boris Johnson and Theresa May included in the lyrics but still (obviously) with it’s singalong ‘Albert Tatlock’ chorus.

They return for a second time and reprise 'Of One Skin' claiming they’ve run out of material. It’s perhaps slightly odd that they refrain from previewing anything from their new album but I suppose tonight is really all about the last 40 years.

Now I am no hard core Skids fan but tonight was pretty special. Welcome back to the best (and only) punk band from Scotland, so says Jobson’s mother anyway.

Afterwards L talks me into crafty drink at Blue Monkey, she really is a bad influence. It’s a good call as they have Chocolate Gorilla on.