L and I parkrun up at Rother Valley, adding another new venue to our ever lengthening list. After that we pop in and see Doggo's brother's owners. They recently lost him but they are pleased to see Doggo and of course to meet The Lad. Everyone's pleased to meet The Lad but not as pleased as he is to meet them.

Then we're at Broadway in the evening.

Everybody is raving about Guillermo del Toro at the moment but I'm not that familiar with him. His films range generally from Spanish language horror films such as the acclaimed 'Pan’s Labyrinth' to weird action affairs such as 'Hellboy'. So the 'Shape Of Water' is already being acclaimed as a masterpiece.

Del Toro calls it a fairy tale and everyone says its based on ‘Beauty And The Beast’, which I suppose, tenuously, it could be but personally as I watched it I was thinking 'Splash' only without Daryl Hannah or maybe the 'Creature From the Black Lagoon'.

This is probably why it's up for so many Oscars, the Academy does like a bit of cross pollination with old films and this, like ‘La La Land’,  name checks many, features a cinema and also a man obsessed with old movies.

Then again the Academy aren't going to like the plagiarism allegations surrounding the play ‘Let Me Hear You Whisper’ which is a love story between a cleaner and dolphin that is held in a laboratory. 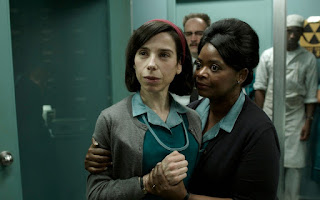 The cleaner in this story is Elisa Esposito (Sally Hawkins) who is a mute and has been since she was found by a river one day with odd scars on her neck. She lives above the Orpheum cinema which somehow survives on its minuscule audiences and next door to Giles (Richard Jenkins), an out of work artist who watches old TV movies all day long while having the hots for the waiter at the nearby pie emporium.

Elisa’s cleaning job is at a ‘top secret research facility’ where she works alongside Zelda (Octavia Spencer). The research facility has a new project, having come across an amphibious creature somewhere in the Amazon. Despite the top secret-ness of the facility the two cleaners stumble across it while doing the hoovering. 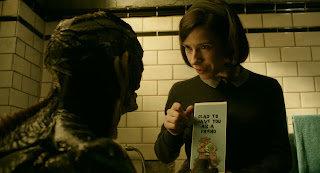 Elisa then shares her eggs with the creature, plays him music and dances for him. He seems smitten too and she devises a plan to save the creature from the clutches of the film’s bad guy Colonel Strickland (Michael Shannon) and his boss General Hoyt (Nick Searcy). 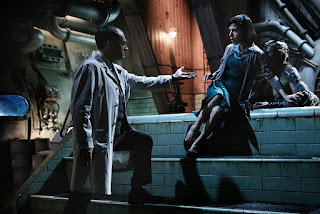 She talks Giles into helping her and they are assisted by the sympathetic scientist Dr Hoffstetler (Michael Stuhlbarg), who wants to study the creature which he says was once revered by the Amazon tribes as a god. Neither of these men nor her colleague Zelda appear to think her romance with the creature is at all strange.

Back at her apartment, she keeps the creature alive in her bath which she fills with salt water but things don’t take a good turn when he dines savagely on the cat and then Hoffstetler turns out to be a Russian spy. This is the cold war by the way and Russian Agents have already infiltrated the facility with the soul purpose of killing the creature. 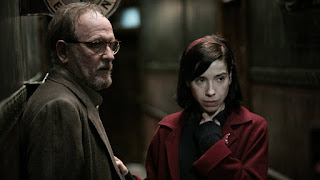 The creature does she to get on with Giles because as well as being able to heal bodily wounds, he can also restore hair to a bald man. Elisa is happy as well because she now gets to consummate her relationship with the creature in her bathroom, Which we find out will hold ten feet of water simply by closing the door and putting a towel under it. Well, apart from a few leaks into the cinema below. 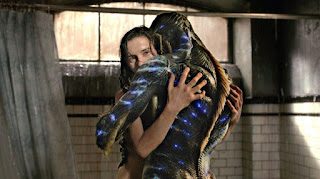 So all that is left is to complete the plan. The plan being that once the river is at full tide, the creature can be set loose to find the ocean. What can possibly go wrong...

Well... it is indeed a good film but bloody weird too. Best Film? Probably not.