This morning we all parkrun at Long Eaton. Daughter decimates her PB and L is quicker too. MD and I do a solid 24.12.

Then on the way to the match I collect my bike, ahead of a session on the track on Sunday. At the match Derby beat Brentford 3-0 but aided by a sending off.

In the evening we're at Broadway to get some relationship advice from Daniel Day-Lewis in 'Phantom Thread'.

Reynolds Woodcock (Daniel Day-Lewis) is a celebrated dressmaker in 1950s London, dressing the rich and famous but now feeling under pressure from new fashion influences coming across the Channel. 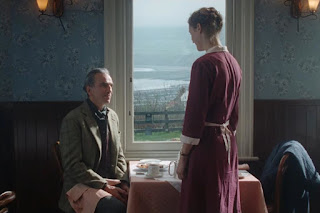 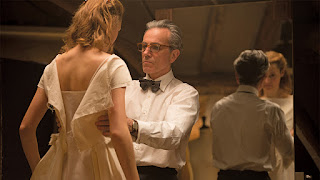 Once she is living with him she comes up against the strict regime run by Woodcock and his sister Cyril (Lesley Manville) and has to cope with a man who, if he has any emotions at all, keeps them very well hidden. She clearly wants much more from their relationship than she is currently getting, which appears to be next to nothing, but he won’t have his carefully constructed life disrupted for anything, not even an attractive young woman half his age. It is not even suggested that they might be lovers.

So leave you think... but she doesn’t. Instead she serves up a surprise romantic meal to a man who clearly does not like surprises or romance. Domestic war breaks out with asparagus chosen as the weapon of choice. 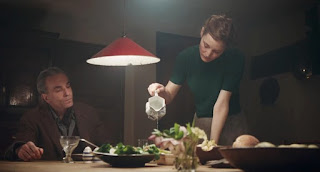 Alma is right about one thing though. The solution to her problem was to be found in the kitchen. When she cooks him up an omelette containing poisonous mushrooms he promptly falls proper near death ill after eating it. Now she is finally happy because she can indulge herself in nursing him back to full health, openly relishing his reliance on her, and for a time they have a normal-ish relationship. 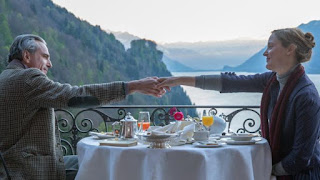 Until he reverts back to being a miserable bastard. So she does it again.... and he knowingly lets her... and she says she will do it again and again if it makes him need her. Now call me old fashioned but any relationship which relies on one party being poisoned regularly to bring out their good side is not a great basis for a long lasting future together. Perhaps they should have gone for counselling instead but what do I know?

It’s a decent film by the way with Day-Lewis in a Day-Lewis role that couldn't be a more appropriate one for him to end his career on, that is if he now retires as he has suggested he will do.


We have a drink afterwards in the Borlase but just the one as we get driven away because the pub is so very noisy, well one particular girl is. Daniel won't have put up with that and nor do we, we don’t stay.and head to the Blue Monkey instead. The new pub on Canning Circus isn’t open yet but will apparently open in two weeks time.