We get a painting quote for £850 for just two rooms, well one room and the hall actually. This seems seriously over the top to me. I do find it odd that the painting is more expensive than the plastering but then I expected the plastering to be probably double what he charged us. Included in the painting price is ‘filling holes’. How can that be, it’s brand new plaster!

L drags me to the Bonfire Night celebrations at Forest Rec, not that I needed much dragging. It was a good job I was dragged because L was supposed to be meeting Daughter but she’s been detained by her friends and they are late. Not that we see them at all.

The event itself is more of a funfair with a disco attached and as an afterthough a bonfire and fireworks. The bonfire is impressive enough but with no build up or fanfare, some shadowy figures emerge, sidle up to it with lanterns and light it. There seems to be effigies of several yellow jacketted council workers on top, perhaps that's why. 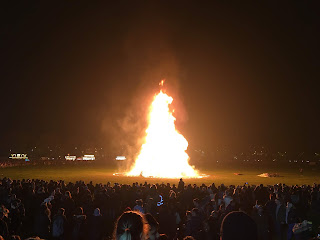 If that was with lack of ceremony, it’s got nothing on the fireworks which appear out of nowhere and without warning. Good they are though although very brief.

On Wednesday, I’m in London and as usual the drive down is horrendous. It takes us four and a half hours to get there and only slightly less to drive back up. The visit itself goes very well.

After cycling on Thursday, as well as on Tuesday, I’m effectively asleep under my desk but I don’t think anyone notices.

Cycling probably wasn’t a great idea because tonight is the start of the Nottingham 5k Winter Series which is a monthly series of runs on the Victoria Embankment. It’s a 7:30pm which I think is so civilised but L complains that it’s almost her bedtime. So neither of us will be sub-20 tonight then. Daughter joins us.

The problem with a Winter Series starting at 7:30pm is that it will be dark, very dark. The organisers, Nice Work, tell us the Embankment is well lit. Which means they clearly haven’t been there at night and those that have sensibly turn up with head torches. Well, the smart ones do. We don’t.

In the end it’s not a bad run, well not as bad as any out and back along the Embankment could be.