L is so convinced she isn’t going to be running the Burton 10k today that she breaks her own boundaries before we even roll out of bed. Then she decides she is fit to run and then blitzes it in a good time.

Although she nearly didn’t get the chance to blitz anything as we struggle to get to the start at Shobnall Leisure Centre because most of the surrounding roads are closed due to road works. We have to abandon our car in a street somewhere and walk the rest of the way, as do a fair number of the competitors although others do seem to have cracked the secret code and found a way to the car park.

The course is undulating, or rather largely uphill in the first half and downhill in the second half. It finishes with a lap of the athletics track at Shobnall. It was a pleasant leg stretch.

In the evening we are at Broadway to see Animals.
Laura (Holliday Grainger) and Tyler (Alia Shawkat) are two friends who share a flat in Dublin and enjoy a hedonistic lifestyle with lashings of drink, drugs and casual sex. Robin Ellacott as you've never seen her before.
. 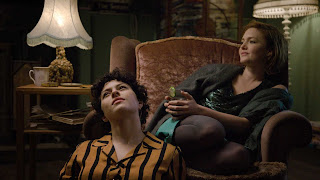 The pair simply get through their days so that they can live their nights but you have to wonder how, as they both appear to work as baristas, they can afford to do this. It is true that they do seem to have a knack of finding functions where there is free drink on offer while Tyler is shameless about decanting the dregs left in other people’s glasses into her own. There is barely a single scene in the film where wine is not being drunk or drugs being snorted. A lot of the film’s budget must have gone on ‘substances.

The girls’ friendship is a close one, at times they even share a bed and rarely leave each other's side, but as they enter their 30s Laura begins to wonder if it’s time to avert an early death and grow up. She’d also quite like to finish the book she’s been writing for the last ten years, which only stretches to ten pages at the moment.

Her sister, once their partying partner in crime, is now married, pregnant and sober. She is increasingly disapproving of her sister's lifestyle and of Tyler in particular. Whereas Laura is close to her family, Tyler never sees hers.

An opportunity for a more balanced way of life presents itself when Laura meets classical pianist Jim (Fra Fee). He is diligent, level-headed and hard working. A grown up even. Everything she isn’t. 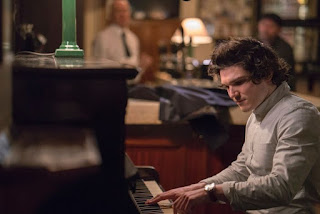 Jim tries to fit in with Laura’s partying but he just isn’t very good at it. While Laura starts to think more and more that settling down with Jim might be quite a nice option. She tries to bridge both of her worlds, not wanting to become as boring as her sister but equally not wanting to abandon her best friend, and mostly fails. Tyler is quick to see which way the wind is blowing and doesn’t like the prospect of losing her friend. 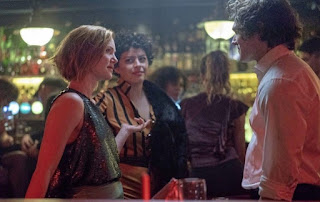 Laura then compounds her dilemma by meet a dodgy poet called Marty (Dermot Murphy) who she clearly has the hots for but can’t follow through, well... almost but not entirely, you assume out of loyalty to Jim. Then when she finds out that Jim is cheating on her she has the nerve to be upset about it. They separate, leaving Laura alone to perhaps finally finish that book...

It’s one of those films that just drifts along and that’s a style I really like. None of the characters in the film are particularly likeable, so it’s hard to know where your sympathies lie, but that’s the point really. Well worth a look.
Posted by FitForNothing at Sunday, August 11, 2019