Once Upon a Time... in Leamington

On Saturday we go over to Leamington to visit Son and of course to do a Parkrun. L may not be quite up to running at the moment so instead she decides to walk Leamington parkrun with Son. Yes, that shocked us too. She’s signed him up with a barcode and everything. He seems surprisingly up for it but I’m sure he’ll never do another one and he looks well ready for his breakfast afterwards.

In the evening, we're at Broadway.
Set in 1969, Quentin Tarantino's new film 'Once Upon a Time... in Hollywood' is two stories ran in parallel. The first is total fiction and concerns Rick Dalton (Leonardo DiCaprio), a TV cowboy in the long running series ‘Bounty Law’. 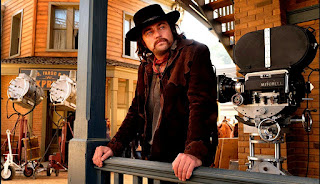 Rick is now a fading star as Hollywood moves on to newer and younger things. So Rick is attempting to reinvent himself but is only being offered bit parts as a bad guy. On the downward curve alongside him is his stunt man Cliff Booth (Brad Pitt). They are drinking buddies but while Rick lives in luxury in the Hollywood hills, Cliff lives in a trailer with his dog, Brandy. 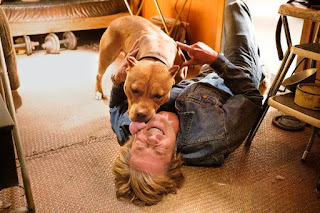 Meanwhile, living next door to Rick on Cielo Drive is Roman Polanski (Rafal Zawierucha) with his wife Sharon Tate (Margot Robbie). Cue the second story, a factual one that is about to get the Tarantino treatment. 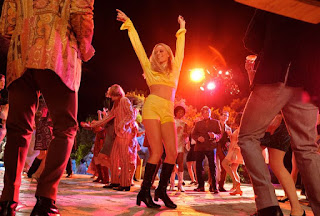 The film is set in the months leading up the real life murder of the pregnant Tate and all the other occupants of the house on Cielo Drive at that time. Tarantino slow burns through that period filling in Rick and Cliff’s story and dropping in casual encounters with Charles Manson (Damon Herriman) and some of his ‘Family’ members. Cliff even visits Spahn Ranch to see an old acquaintance George Spahn (Bruce Dern) where the Family are now holed up. 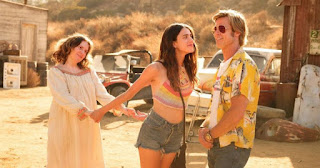 Where is the film going? Of course with Tarantino you can never be sure until you get there. He could have recreated the murders. He certainly wouldn't have baulked at that. In fact you find yourself waiting for tragedy to strike knowing that with Tarantino they would have been in equal parts brilliant and unwatchable but he didn't. Thankfully he didn't. The title of the film implies this is a fairy tale, where endings can be anything you want them to be, so all bets are off. 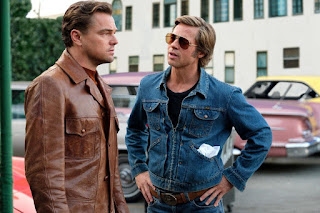 Overall it’s a long, but mesmerizing, film with all the usual immaculate detail along with an incredible soundtrack (naturally), great cinematography, great acting especially DiCaprio and Pitt among plenty of famous names both as actors and as characters played by other actors. Typically there’s plenty of drugs and violence, and a stirring of controversy in casting Cliff as a wife killer among other things in the film to get people wound up but most of all Tarantino does what he does best. He tells a great story.

Some Quentin Tarantino movies of late have disappointed, this one doesn’t. This is right up there with his best. He might as well retire now.