Stop Holding Hands There At The Front

It was a bit blustery on the bike on Thursday, which obviously just makes it more fun... L manages to swim which means her hip must at least be letting her get in and out of the water.

It’s still blustery when we play wind assisted tennis later, which obviously just makes it less fun... I have enough problems keeping the ball in the court as it is. While L has her final tennis session.

Much later, I’m sat up in bed in the early hours watching Triathlon’s Olympic Test Event in Tokyo on my laptop. In the women’s event GB’s Jess Learmonth and Georgia Taylor-Brown destroyed the field and took 1st and 2nd places only to then be disqualified for holding hands. FFS. Apparently they engineered a dead heat. FFS. That’s yet another bizarre rule introduced by a governing body who continually seems to want to undermine their own sport e.g. this was yet another mind-numbingly dull course on dual carriageways. It’s one of the few sports I’m not actively trying to get Olympic tickets for. 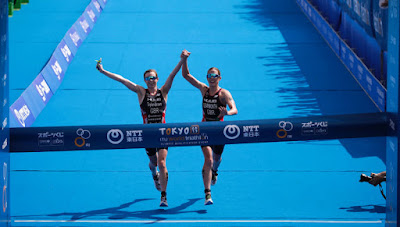 I doubt the girls are too bothered. Everyone knows who won, there were no World Triathlon Series points on offer and the event was all about finishing in the top three to meet the selection criteria for the GB Olympic team. Job done I’d say. See you both at Tokyo 2020, although obviously we’ll be at the Archery instead.

Or perhaps the Canoeing. On Friday I hear about some Olympic tickets going on sale on the Hungarian ticket site, so I have a dig around to see what they have and I add some Canoe Sprint tickets to our portfolio.

Also on Friday L’s back at PT despite her hip. Her session again seemed to consist mostly of boxing which she seems to really like. It’s a shame the chap’s leaving at the end of October.
In the afternoon she goes over to visit her folks and we meet up after I’ve finished work for a cheeky one in the Exeter.