The weather is foul. After donning full waterproofs, walking to the Yard for our usual Wednesday pizza and getting soaked, we find out that the pizza oven is broken. So I had to have a chicken sandwich instead. Hardly enough to get me through my gig tonight even if it did come with sweet potato fries. It's a good job it's only (semi) acoustic.

It's also a free gig. That is if you pre-ordered Feeder's new album 'Tallulah' from Rough Trade. I had learnt my lesson from before and didn't buy the album in the band's own pre-sale when it was announced months ago and instead waited to see if these launch gigs would again be set up. Which they were. 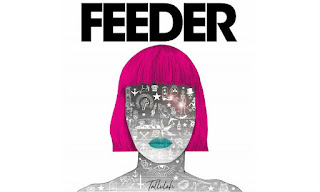 It saves you ending up with multiple copies of the same album, which clearly the band don't mind you doing as the whole point of all this marketing is to get high sales in week 1 and hence get the album in to the charts. As of the night of this gig the album was due to land at number 4 but the chart itself isn't confirmed until Friday. We shall see where it ends up.

Upstairs in the bar at Rough Trade is a really good place to see a band in an intimate venue, although the place is designed in such a way that only about 20 people can actually see the band.

Feeder are playing semi-acoustically mainly because you can really get a full drum kit on the small stage let alone all your other band paraphernalia but then all Grant Nicholas requires to sound outstanding is his acoustic guitar. That he backed by Taka Hirose on bass, Tommy Gleeson on guitar and Geoff Holroyde on bongos (although they call them something else) and maracas (allegedly down his sock) is a bonus. 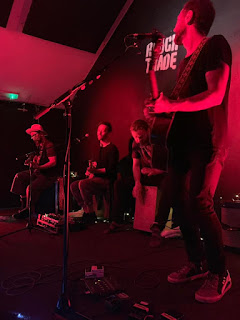 They played five full tracks from Tallulah and four oldies although as everybody there were pretty much Feeder hardcore armed with the new album they didn't really need to do the crowd pleasers that they did.

Personally I'd have been well happy if they'd ran through the whole of the new album but it was quite clear they'd only rehearsed the five songs. So the comment by Nicholas that they were making the set up as they went along wasn't quite true.

We got one of those dodgy Feeder votes where he asked for everyone's favourite from Tallulah and when he didn't get the answers he wanted he asked the band instead. Then we got small snippets of other Tallulah songs that Nicholas effectively did solo because the rest of the band hadn't rehearsed them.

Of the ones they played in full 'Fear Of Flying' is my favourite being old school Feeder. It crackles with electricity and is laden with hooks. 'Youth' meanwhile is a summery throwback that will take you back and it's classic upbeat Feeder. While 'Daily Habit' is brilliantly quirky and Britpopish. These three are the standouts from the album and presumably nailed on for November's tour.

'Kite' meanwhile leaves me cold, it's a bit too Beatles-ish for my tastes and sounds like a filler while 'Blue Sky Blue' is them trying a bit too hard to anthemic, stadiumish etc. Give me 'Windmill' instead any day, of which they only play a snippet, with its epic quiet-loud sound. Granted it's not really suited for an acoustic set.

At the end Nicholas asked for requests and got a wide selection of obscurities from long deleted debut release 'Chicken On The Bone' to 2004 b-side 'Victoria'. Honestly if people actually shouted for something half sensible that they could play then we might actually get it! Instead he reluctantly agreed to play 'Buck Rogers' despite the fact I didn't actually hear anyone call for it...

Overall though a very relaxed 50 minute set with some great new songs. 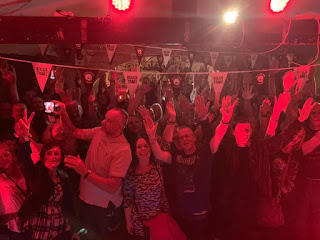