A Long Run And A Genteel Hobble

This morning Daughter comes over and along with the Lad we head off on a 10 mile training run. L would probably have joined us had she not been injured and I'm sure she will be before long if she’s patient with her recovery.

I take us from home down to Balloon Wood, left down Coventry Lane and then we keep going until we reach the centre of Stapleford where it’s round past the Horse and Jockey before heading all the way back to Priory Island where we take right to go around the outside of the University. We hit ten miles just as we pass the Sutton Passey’s entrance to Wollaton Park and then we walk the rest of the way. We bump into L who has been for a 'genteel hobble' with MD while the 'misbehaving one' is otherwise occupied.

In the evening we're at Broadway.

The Irishman is made by Netflix, who have given the film a very limited cinematic run before confining it purely to streaming. The same thing happened with last year's Oscar contender Rosa, which we missed, so here we are making sure we catch this one.

Directed by the legendary Martin Scorsese, who having already made such classics as Raging Bull, Taxi Driver, Goodfellas, Casino and The Departed, returns to the world of the mob for possibly one last hurrah.

The film is based on the confessions, late in life, of Frank ‘The Irishman’ Sheeran, a real-life mobster, which lawyer Charles Brandt documented in his 2004 book ‘I Heard You Paint Houses’.

The film has plenty of my least favourite thing, flashbacks, as Sheeran (Robert De Niro) looks back on his life from the loneliness of his care home. It even has flashbacks within flashbacks as we follow a road trip from Pennsylvania to Michigan that takes place in 1975 which contains its own reminisces.


Sheeran was a truck driver who started to make some money illegally on the side. When he is found out his union’s lawyer Bill Bufalino (Ray Romano) helps him out. The price for this seems to be further involvement in the crime underworld and Bufalino introduces him to his cousin Russell (Joe Pesci), the head of the local mafia. Sheeran’s Second World War training seems to make him very good at following orders without asking any difficult questions nor developing any feelings or morality, making him an ideal candidate to do the mob’s dirty work for them. 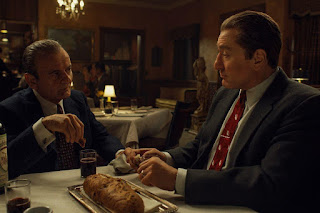 Russell Bufalino then recommends him to Jimmy Hoffa (Al Pacino), the head of America’s most powerful and corrupt union, where he ends up working for Hoffa as chief bodyguard and hitman. Hoffa grows to trust him completely and becomes close to his family, especially his daughter Peggy (Anna Paquin), who we see become increasingly disillusioned with her father as the years tick by.

After John F. Kennedy comes to power in 1960 the Government sets out to get Hoffa and eventually they send him to jail. Once he has served his time, Hoffa tries to once again retake power at the top of the union but this doesn’t go down well with the rest of the crime fraternity.

It is on the 1975 road trip to the wedding of Bill's daughter that Sheeran learns that he must kill Hoffa. Then in a clandestine journey that involves two flights and four car rides, he meets up with Hoffa and matter-of-factly shoots him twice in the back of the head. Then he has to call Hoffa’s widow Jo (Welker White) to reassure her that her missing husband would be sure to turn up sooner or later. A phone call that he is clearly still haunted by 28 years later although perhaps not so much by the actual killing. 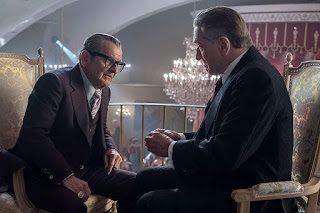 Apparently Netflix handed over an obscene amount of money to Scorsese to fund this film and in many ways he delivers for them but perhaps Netflix gave him too much of a free hand and should have insisted on a bit more editing as it seems overlong.

Clocking in at a massive three-and-a-half hours, the overused word ‘epic’ has been uttered by many but there isn't actually that much going on a lot of the time and there are a lot of characters in the film, probably too many. These are often introduced with captions giving their names with how and when they died. These are usual violent deaths but actually, for Scorsese, quite dull deaths. 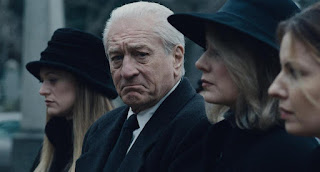 Sure, it's well made film and fascinating at times but it is slower and more labyrinthine than his previous films while not being not half as entertaining or enthralling as say Goodfellas or Casino were.

Scorsese reunites Robert De Niro and Joe Pesci for the first time since Casino and chooses to digitally de-age them rather than hire younger actors for the earlier scenes of a film that spans six decades. Does it work? It’s debatable.

It is an ambitious project but feels like one film too far for Scorsese but if he gets one last Oscar will anyone really mind? Not sure he’ll get it though.