Friday was yet another nightmare travel day. There was an accident on the A52 which delayed the bus and then when I finally arrived I couldn’t walk down the river to work as it had burst its banks flooding the underpass at the bottom end of Pride Park. I had to divert through the railway station.

As everywhere seems to be flooding at the moment this points to a potentially interesting trip up to Leeds tonight. L and I are going up there as I want to see Feeder at the Beckett University and L is chaperoning me. She doesn’t trust me to drive there and back on my own. We are going up by train (and many are being cancelled) then staying in a hotel, having a wild night out and doing Parkrun in the morning, most likely with a hangover.

I leave work earlier than usual as we’re aiming for the 4:43 train, which is apparently still running although delayed. As I walk to the train station I pass a chap who left work half an hour before me but has only reached the end of our road. Not good. Apparently Pentagon Island is flooded and closed, Station Approach is flooded and closed, therefore everyone is being redirected through Pride Park. So at least we know that going by car wouldn’t have been any easier.

L leaves Nottingham at 3:30 but has no hope of getting to me in time for the 4:43. Eventually she gets off the bus in the middle of Pride Park and runs the rest of the way to the train station. She bursts through the doors at 5:50 and even has time to catch her breath before the late running 5:43 arrives.

The train is of course packed and takes an age as we are diverted towards Nottingham because the Derby to Chesterfield line is flooded.

We arrive in Leeds at 8pm which means I have already missed the support band, who were Novacub, e.g. half of Bloc Party. Feeder are on at 8:45pm. We hurriedly check in at the Met Hotel, where the chap behind the desk is mega slow explaining what we already know about the hotel and asking if the gig I’m trying to rush to is Gerry Cinnamon.

I leave L sipping Vodka and Tonic in the hotel bar at only £10.50 a go, I hope it was Grey Goose but apparently it wasn’t. I burst through the doors of the Beckett Uni with just five minutes to spare.

...and so to the gig. Yet another Feeder gig. I must be an addict.

After a ‘Best Of’ Tour last year, the band are on the road to promote their new album Tallulah of which we get to hear plenty tonight. Grant Nicholas, Taka Hirose and the band play no less than nine tracks of the twelve tracks that are on the new record ranging from typical up tempo Feeder fare such Youth, Shapes and Sounds, and Fear of Flying through the monster that is Kyoto to lighter numbers such as Kite and Blue Sky Blue, which opens the encore. 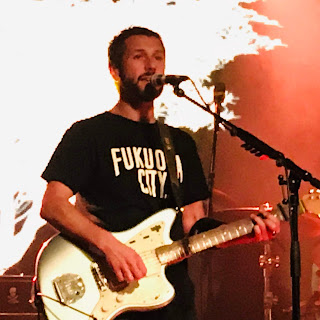 With such a wealth of new material this might have left little room for crowd pleasing numbers but the band, who broke new ground with the longer sets for their ‘Best Of’ Tour play for almost as long tonight, totting up 22 tracks and seem to have finally mastered the fact that if they hit the stage a little earlier they can fit more in. 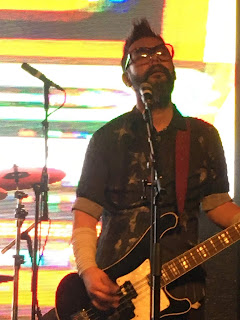 There’s even time for a heavy rock jam session between Nicholas, clearly the frustrated band member that Black Sabbath never had, and drummer Geoff Holroyde while the Leeds crowd egg them on with the obligatory cries of ‘Yorkshire, Yorkshire, Yorkshire’. 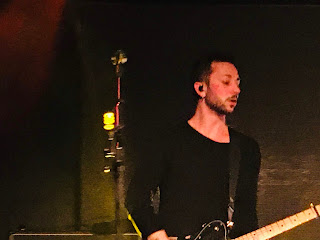 Highlights for any seasoned addict are when you get something a little different and apart from the many cracking songs that are part of the new album this comes in the shape of a first play since 2008 of 'Comfort in Sound' but this is then out-highlighted when they end the main set with three in a row from 2001’s Echo Park, the first of which is the wonderful 'Turn' which is played far too rarely. 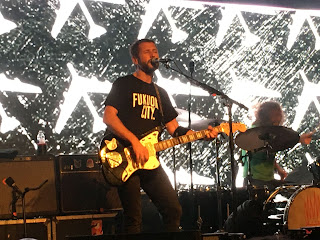 Although being down the front in the mosh for a ferocious double header of ‘Come Back Around’ and ‘Insomnia’ pushes those moments close.

See you again in Nottingham guys.

Afterwards I meet L in an excellent bar called Foleys Tap House which, as it turns out, has a beer festival on and loads of dark beers. We don’t leave there much before 1pm and then end up at Subway because we haven’t had anything to eat and there’s nowhere else still open.

Somehow we drag ourselves out of bed in the morning and jog the 1.9 miles to Armley Parkrun. There was a nearer one, at Woodhouse Moor, but L’s done that one before. The run goes well, despite not having any dog power, and then we go to their post-run coffee location which is the nearby Malt Shovel pub but no one else seems to turn up. No matter, we have breakfast there before jogging back to the hotel, having a quick shower before checking out and then getting the train back home again. Which is another packed train and via another detour due to flooding. So an eventful 24 hours.
Posted by FitForNothing at Friday, November 08, 2019