L says her leg is definitely improving because she can get one sock on today and she didn't have to crawl up the stairs. That’s improving? And she’s only wearing one sock... which is, well, very teenage. She confirms that she managed to get two on eventually and made it to work, after about an hour.

So it’s probably a good thing that she’s been offered physio tomorrow although she hasn’t decided yet whether to go or not. She says I wouldn't go. That’s not quite true, I’ve been to plenty of physios. If I was sure I knew what the problem was then I wouldn’t go, if I wasn’t sure and thought it might help I would go. It’s a judgement call whether a proper diagnosis (and therefore the extreme cost) will help or not.

In the evening I'm at the Rescue Rooms.

Opening tonight are Queen Kwong from Los Angeles. The Queen herself is Carré Callaway, who has assembled the band around herself. She starts their set on her own, singing sweetly, beautifully purring like kitten that quickly metamorphoses into a tiger as the rest of the band arrive and pick up their instruments as does the Queen herself. Then amid much hair tossing and grinding away on her guitar, the set quickly becomes a homage to all that is raw, energetic and loaded with noise guitar. Sonic Youth, The Swans, shades of Iggy Pop, Nine Inch Nails perhaps... apparently she was discovered by Trent Reznor, you can tell. Very nice. 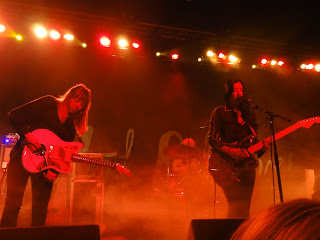 Can Blood Red Shoes get nosier than that? Of course the can.

Now here’s a thing. Me finally seeing a band that’s been near the top of my wish list for at least ten years and before they’ve even decided to split up. To be fair, everybody thought Blood Red Shoes had split up when they went on an extended hiatus in 2015. It was, with get relief, that they re-emerged with new material in 2017, a new album ‘Get Tragic’ at the start of 2019 and a stint supporting the Pixies across Europe.

The duo, consisting of guitarist Laura-Mary Carter and drummer Steven Ansell, are known for their hugely energetic shows and the sound they can produce with just a solitary guitar and a drum kit.

The new album however sees them using other instruments as well, additional guitars, bass, synthesizer and drum pads. So they take to the stage tonight with reinforcements and open the night as a foursome while Ansell tells us of his love for Glühwein, which he has in a little plastic cup. Carter’s choice is much classier, carrying her red wine in a proper stemmed glass.

They open with a trio of newer tracks ‘Elijah’, ‘God Complex’ and ‘Mexican Dress’ mainly from the new album but not in the case of ‘God Complex’ which was a one off release, something they are inclined to doing. Two of their set regulars, Black Distractions and Red River, don’t come from albums either but from 2013’s Water EP.

Then the additional musicians are stood down as the twosome launch into their 'old' stuff. Oddly this actually ratchets up the volume levels despite there now being less musicians on the stage. 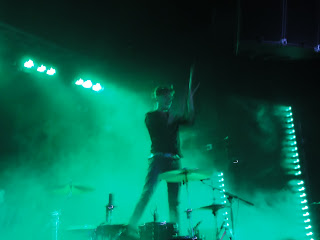 Typically you’ll see a band’s drummer stuck at the back of the stage but not so here, Ansell has his drum kit positioned right at the front and it is he who does most of the interaction with the crowd. Unfortunately as I am on Carter's side of the stage, one of his symbols prevents me getting a good photography angle on him. Carter meanwhile says very little throughout. 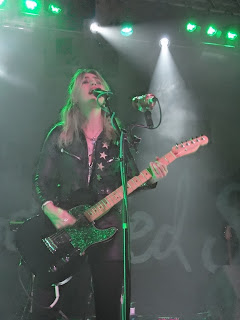 After nine ‘oldies’, including such classics as ‘Don’t Ask’ and ‘Light It Up’ which certainly lit the fire in the mosh pit, the foursome are required again for their second shift but seem to have gone AWOL. Once they are tracked down, together they perform four more tracks from ‘Get Tragic’ including closing with a rambunctious ‘Bangsar’. 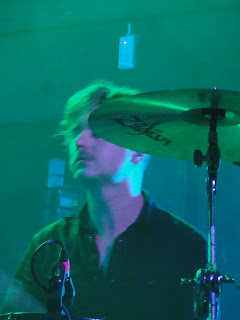 Despite their disappearing act, the new recruits are allowed to join in the encore as the band return to play us out with the belter that is 2007’s ‘I Wish I Was Someone Better’.