Not only does L go to the physio on Tuesday, she also has the day off work. So things must be bad. The physio sends her to her GP to request an X-ray saying she might have a stress fracture. I meet her off the bus at the QMC in case she needs a piggyback home.

Despite her current injury woes she’s thinking ahead to a new sporting career in open water swimming. We even have a new ‘Aqua Park’ near us called Spring Lakes that allows open water swimming where she could train. Although it’s a perhaps a bit chilly at the moment.

They even have a dog splash area and I assume, based on the huge amount of splashing when he disappears through the forbidden fence on Wollaton Park, that the Lad can swim. So they could train together.

In the evening I have my second gig of the week.

I was looking forward to seeing Bryde tonight, who was supposed to be supporting, but Daniel Steer explains that he has been asked to stand in at short notice. So short notice it seems that he’s had to turn up without his band. So it’s just him with a guitar and a piano.

Steer has been around for a while. First as lead singer of The Quails then with These Reigning Days, who are now known simply as Reigning Days and I think are still going, just on a break while Daniel promotes his first solo album. His latest work is produced by Feeder guitarist Tommy Gleeson. 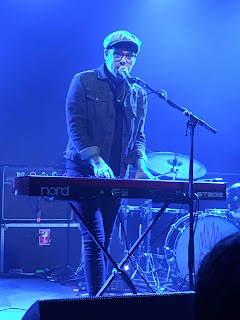 He doesn’t disappoint apart from not being Bryde obviously and apart from not having his band with him, which just makes me want to see his full band show.

The thing about seeing Feeder twice in twelve days is whether anything will be different. The band have a history of playing shorter sets at Rock City due to the earlier curfews at the Nottingham venue, hence my visit to Leeds earlier in the tour.

While Leeds did indeed get the longer set on their previous tour that isn’t the case tonight. Kick off is moved from the 8:45 start it has been at most of the dates to 8:00 tonight to cope with the venue’s club night. That still leaves a full two hours of playing time if the band make use of it and that they do. 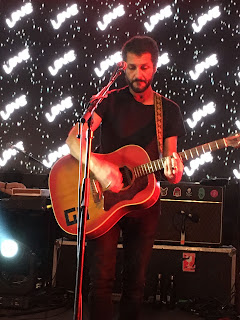 They even add two songs to the set from what I saw at Leeds. There’s the return of ‘Universe of Life’ which I am largely ambivalent to, but I know that Grant Nicholas absolutely loves playing it, and slightly annoyed because they place it between ‘Come Back Around’ and ‘Insomnia’ which were such a breathtakingly double act in Leeds. Though as I’ve practically chained myself to the front barrier where I intend staying and not getting sucked in to the mosh this time, it doesn’t matter much to me personally what happens behind me.

Talking of the ‘mosh pit’, which can be a rare beast these days. There was a bit of a disagreement when some folk tried to get the mosh going early to ‘Fear of Flying’ amid heavy resistance from those wanting a more statuesque experience down the front. It caused the band to pause briefly to see what the fuss was about. Those resisting the mosh won that particular battle but not the war, which was over when the aforementioned ‘Come Back Around’ hit a little later causing a major realignment of the troops down the front. I do feel that the bands should set out their stall early and play songs in an order that gets the mosh going as soon as possible to save on these types of squabbles. 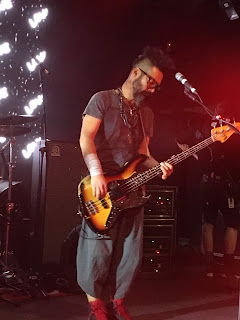 The other addition tonight was the return of the always excellent 'Yesterday Went Too Soon' which appeared as a wonderful back-to-back duo with the equally excellent 'Turn'. Hearing those two tracks played together made my night. Given the positive reception received by these two lower profile hits from the past it’s a little frustrating we don’t hear them more often.

The band now seem to have a settled five-piece line up which has enabled more songs to be learnt which will hopefully lead to even further diversity on future tours and the digging up of more forgotten gems. 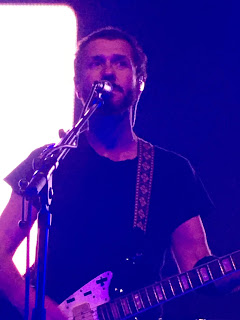 They have a lot of back catalogue to plunder plus I'm sure Nicholas has plenty more new songs he's going to write too, so it’s good to see that 24 song 2 hour sets now seem to have landed and not before time. They seem to be preserving their stamina and his voice by hitting a nice rhythm of two nights on, one night off.

‘Comfort in Sound’ is one that has been reintroduced this tour apparently due to the influence of guitarist Tommy Gleeson, who is a relative newcomer to the Feeder live show but is now in his third year with the band. Tommy is a session musician extraordinaire also being a producer (see Daniel Steer above), and a songwriter as well as a regular performer. So he knows his stuff and he deserves a big shout out as I think he’s made a real difference to the Feeder sound live. I will just put it out there that he’s the best second guitarist they’ve ever had. 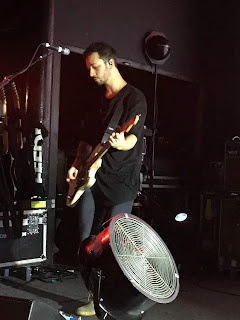 There’s still no ‘My Perfect Day’ though, which I suspect they’re saving for London. I really must get down there for a London date sometime, it usually seems to pay dividends. I’m still not over them playing the epic oldie ‘Shade’ down there on the Generation Freakshow tour and it’s not been seen since. 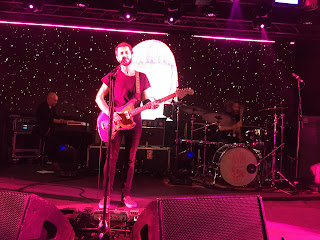 Overall they play a good strong set tonight pulling in much early material along with a ton of stuff from their new album ‘Tallulah’ including what has fast become my favourite 'Shapes and Sounds'.

This does mean that several more recent songs that have been set regulars have gone but it is no bad thing to diversify a bit. Although with nothing played tonight from the three albums that span the period between 2005’s Pushing The Senses and 2016's 'All Bright Electric', Nicholas will have campaigns on his hands for three missing albums if he’s not careful rather than the just the one for regularly ignoring the ‘Silent Cry’ album from 2008 that he keeps saying he’s going to rectify... Who’d be lead singer of a band with such a big and impressive back catalogue?