We have Saturday night in after a fairly heavy night in Leeds on Friday. We also take Sunday off running with neither the long trek to Draycote Water for two loops of their reservoir in their 10 miler of the mud bath that is Coalville 10k appealing. Well the mud bath may well have been appealing to L and I did offer to hold her coat but she declined.

She goes off shopping instead and meets me later in Broadway. Where despite the fact there are two 5% beers on she’s on the coffee. Such a saint. One of the beers is Shipstone’s Krubera, this time finally on cask. So I pop down to meet her and while we’re there we take in a film.

Sorry We Missed You is a film by Ken Loach about a chap called Ricky Turner (Kris Hitchen) who takes a job in the 'gig economy' working as a delivery driver for a parcels firm in Newcastle. 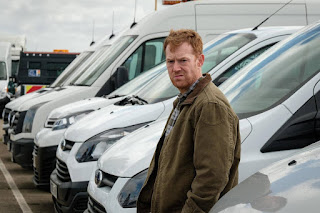 The story goes that after the 2008 financial crash Ricky lost his job in construction and struggled to make ends meet as a handyman. Then he lost his family’s home when Northern Rock went under. Now, with his wife Abbie (Debbie Honeywood) and their two kids, they are back renting.

In a move to try and get his family back where they were, Ricky takes the delivery driver job. However he won’t be an employee, he’ll be a franchisee as the firm’s obnoxious manager Gavin Maloney (Ross Brewster) explains. Maloney is a man who eats unproductive drivers for breakfast. 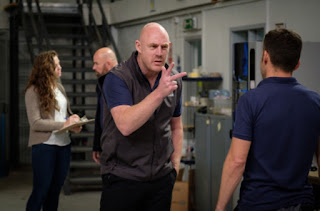 Unfortunately Ricky doesn’t fully understand the terms of his self-employment. This is a world where there is no sick pay, penalties for missing targets and if you’re absent you have to arrange your own cover. Thankfully the drama doesn't extend to him struggling to do his tax return.

He can either rent a van from the company or buy his own. So he sells Abbie's car to get the deposit for his own van. The only problem with that being that Abbie is a home carer and now she's on the bus. Therefore Ricky makes the mistake of prioritising his job over hers and immediately puts extra pressure on himself to deliver for the family. 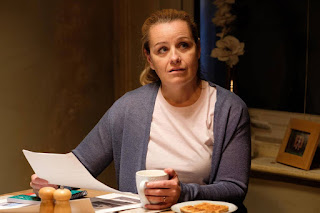 It is a job that is largely inappropriate for him because his family’s circumstances were always going to make it difficult for him to do the job. So, from the outset, we know where this is going.

The thing is Ricky is good at his job and at first things go well but then he starts taking harder and more difficult routes. The extra hours take a toll on him while Abbie struggles with the extra restrictions he’s placed on her job. All this damages their relationship with their kids, daughter Lisa (Katie Proctor) and son Seb (Rhys Stone) who has started skipping school, taking up as a graffiti artist instead. 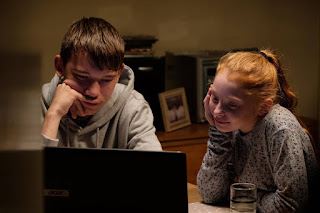 When Ricky needs to get to the school to sort out Seb the only way he can take time off is to accept a fine from the company who are only interested in the bottom line. When he gets mugged there is little sympathy from his boss and he is charged with replacing a scanner that gets damaged in the process. Although I find it incomprehensible that this wouldn’t be insured by either the company or by the drivers themselves.

Of course everything that happens in the film is possible and it makes for great cinema but it's very contrived. Basically all the worst case scenarios have been lumped onto one family. So we get a rather unbalanced view of a business practice that does indeed have many faults but which are maximised here for full effect. 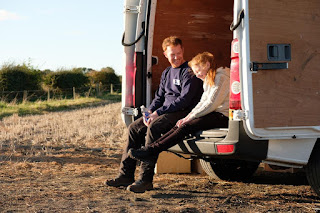 Despite that it is a good film that captures real life struggles but ones that could have happened in any industry, inside the gig economy or out of it. In all industries there are good employers and bad ones.

Ken Loach gets his political point across but for me it was more of a film about relationships and parenting. If anything I though the plight of Abbie as a care worker was more worthy of highlighting than Ricky’s was.