L buys some very expensive 2XU leggings. I’ve always wanted some myself but couldn’t justify the exorbitant cost, which is also probably why she didn’t put them on her Christmas list. Unfortunately they fit like a dream which means she won't be sending them back.

We have a festive gathering on Christmas Eve in Seven on Pride Park. I finish work at lunchtime and walk across. L’s parents are there, my parents, Daughter and even Son and his fiancé are there. Despite the ever increasing guest list Seven had continually nagged us to pre-order. I hate pre-ordering and told them I wouldn’t because it was a ‘surprise’ meal, so ordering would somewhat spoil the surprise, which they had no answer to. Other than to warn us it would take longer to prepare our food.

As last year it’s a decent meal but we don’t get the guitarist that we had last year, who I thought was quite entertaining but I also know others found him annoying. It’s also a lot quieter, so there really was no need to pre-order and the food arrives very promptly.

Christmas Day, of course, means Parkrun and the Lad blitzes me around Alvaston in 20:14 which is a new PB by some distance. By 52 seconds to be precise. It just shows what five pints down Canning Circus the night before can do for your preparation. I celebrate with a couple of pints down The Plough at lunchtime.

Christmas Day also means curry and in the evening we go to the Mogal E Azam who are open as usual and with normal prices. Daughter joins us before jetting off later in an Uber to meet her bf who is heading over from Manchester to see her.

Boxing Day is another day for running and we are again at the Furnace Inn on Darley Park for their 4.6k run (according to my GPS). Later we collect my parents and bring them over to us for a meal.

By Friday, Christmas is all over and I’m back at work, pedalling in on blissfully quiet roads.

Somewhere on the vastly misinformed internet it says that the average cyclist pedals 1852 miles a year and drinks 22 gallons of beer which means a consumption rate of 84 mpg. 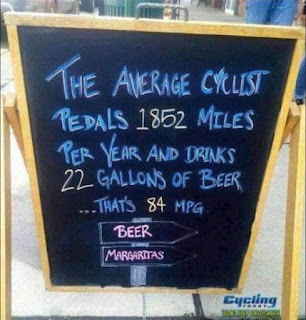 Which is interesting...but... I’m not sure that’s very average as 22 gallons a year is only 3 pints a week. I cycled 1642 miles last year and I reckon would have consumed around about 70 gallons of beer, so that’s a less than impressive 23 mpg.