The.Manchester Marathon, and yes Brighton, join the list of postponed races. The Olympic Boxing Qualifiers in London close to spectators after the first day of eleven and then to competitors after the second. Bizarrely the Cheltenham Festival goes ahead in it's entirety.

Our hotel in Brighton is very helpful and quickly allows us to rebook for their new (optimistic) date in September despite Booking.com themselves not making it easy. I’m sure our train tickets could be a lot harder to sort.

Wollaton Parkrun goes ahead albeit with a smaller field this week of 295 and the Lad is first dog because the normal first dog is probably self isolating. We have coffee in the café and then re-enact the Bleep Test for Daughter, which is the next challenge in her application to join the police. It turns out not to be as easy as it looks on YouTube but we’ll get her there and she does have tired legs after today’s run.

With Ashby off we can at least go out and get sloshed, while we still can. I get a slightly begging email from Broadway Cinema saying that they’re still open (at the moment) and please visit us. So we go to support them, while we still can. We eat there, see a film and then have drinks later in Brewdog.

The film we see is Misbehaviour.

Misbehaviour takes us back to the 1970 Miss World contest in a time when the contest was a very big thing. It was a British success story that was covered by the BBC and beamed around the world. Although the contest continues to this day, it is much more under the radar and this film probably marks the point at which opinion started to turn against it.

The competition was founded and run by London businessman Eric Morley (Rhys Ifans) and his wife Julia (Keeley Hawes). In 1970 they persuaded Bob Hope (Greg Kinnear) to return to compare the show again even though his wife Dolores (Lesley Manville) has still not forgiven him for having an affair with Miss UK who won the competition in 1961, the last time Hope hosted. You do have to feel sorry for Michael Aspel (Charlie Anson) who was the main host of the 1970s show but was shunted aside so that Hope could compare the finale. 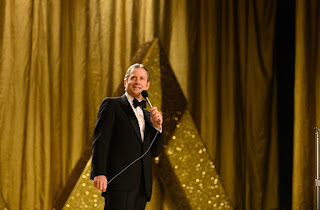 As the film shows, the 1970 contest was disrupted by protests from the fledgling Women's Liberation Movement. One of the ringleaders was Sally Alexander (Keira Knightley), a mature history student from a decidedly a middle-class background whose mother Evelyn (Phyllis Logan) was a big Miss World fan and who just wished her daughter would stay at home to be a good parent to her daughter. 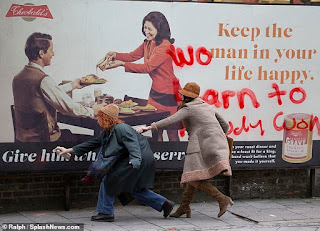 Frustrated by the amount of sexism at university, Alexander eventually teams up with Jo Robinson (Jessie Buckley), the leader of a feminist group who all hang out together in a commune making protest signs, writing graffiti and grumbling a lot but not much else. Alexander attempts to lick them into shape. 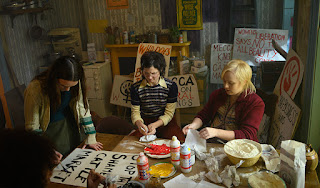 Together they plan an invasion of the Miss World ‘cattle market’ which is to be held at the Royal Albert Hall, where they find another more sinister protest threatening to upstage them. Earlier the same day, a bomb exploded under a BBC broadcast truck parked outside the venue. This was planted by an anarchist extremist group known as The Angry Brigade who had already been responsible for several small scale bomb attacks in the UK. 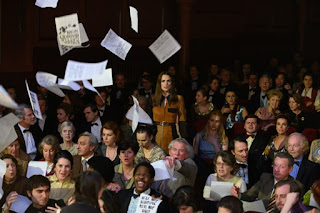 Bob Hope was mid-way through his repertoire of sexist jokes when the women started hurling flour bombs and fruit at the stage ensuring the Women's Liberation Movement claimed most of the evening's headlines.

However, a lot of the contestants didn’t agree with the sentiments of the protesters. To many the show allowed underprivileged women to realise their dreams and it also gave ‘woman of colour’ a chance to shine. Even if South Africa had to quickly come up with a second contestant to ward off anti-apartheid campaigners such as Peter Hain. Alongside their white contestant Jillian Jessup (Emma Corrin) came Pearl Janssen (Loreece Harrison, competing as ‘Miss Africa South’. 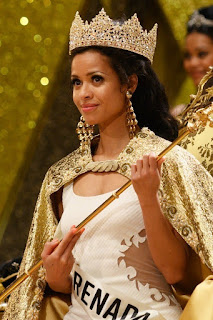 Significantly, the winner was to be Grenada’s Jennifer Hosten (Gugu Mbatha-Raw), who became the first black winner, with Miss Africa South taking second place. The hot favourite Miss Sweden Maj Christel Johansson (Clara Rosager) came only 4th. This wasn't without its own controversy with the president of Grenada Eric Gairy on the judging panel.

Misbehaviour turns out to be quite an engaging drama which is quite educational and scores highly on the post-film Googling scale.