I wake up this morning alongside the girl from the other office, so we definitely seem to be getting on. That said we are not alone, our two other colleagues are here as well, which means it’s a bit crowded, although they’re easily satisfied with a couple of biscuits and a ball chuck.

We have now abandoned the morning dog walk. I can fit it in but I’m not sure the dogs have got time for it with us being at home all day. Their days are now so busy they don’t get chance to laze in their beds all day long. It helps that since the lockdown started it has barely rained and the garden has finally dried out. This means I'm getting plenty of agility training in with the Lad.

Thursday brings ‘Clap For Our Carers’, a round of applause for the NHS at 8pm which is followed by Jay Flynn’s Virtual Pub Quiz. Flynn, a former pub landlord from Darwen, is rumoured to have pulled a peak audience of around 300,000 for his quiz.

Parkrun moves its quiz to Friday night at 8pm and with all our races called off we are being urged by all the races to sign up to Virtual Runner... I think not. Although L does run with virtually with Daughter.

We attempt to keep the local economy going by ordering a take away from the Park Tandoori. They won’t usually deliver to us on a Friday because they’re too busy but now I imagine they have no choice. The Savera meanwhile has, for some reason, reverted to collection only.

On Saturday we book an online film through Youtube and watch ‘Schindler’s List’. I saw this on its release in 1993. L has never seen it but has recently read the book. This is washed down with lashings of Krubera after my online order with Hollow Stone (aka Shipstones) Brewery arrives. 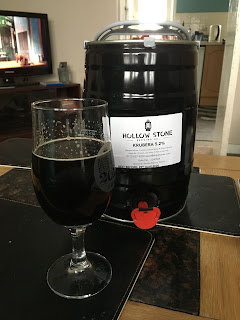 On Sunday I continue trawling Youtube for interesting things to watch and decide on a rerun of the 1996 Tour de France. This was a landmark Tour from my youth although I was 29, so hardly youthful. Miguel Indurain had bored us all to tears by winning the previous five tours while never actually winning a stage that wasn’t a Time Trial. Although he had won a couple in the years before when he'd been a domestique for Pedro Delgado. You’re not allowed to say that Indurain was on EPO because nothing has ever been proven but...

Riis had little choice than to admit his drug use when it all came out later. Which means I must watch 1997 and 1998 as well.