First thing on Friday, I get an email from the Royal Mail telling me that my package, which is my 100th parkrun t-shirt, has been delivered at 07:42 but it's not there waiting for me when I arrive at work. So clearly it hasn't been delivered and it turns up at 11:00. There’s a lot of this going on at the moment and there’s really not much point having parcel tracking if the delivery drivers are scanning stuff before they’ve even delivered them. 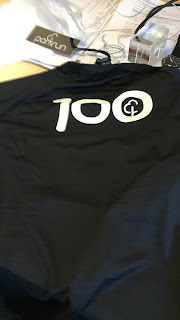 L tells me she’s mindlessly googling ‘undertraining for a marathon’ as if it’s not something that everybody does. Which she does acknowledge as she reads yet another blog from someone who’s allegedly not trained but managed to drag themselves round in four hours.

I’m not too sure she’ll need to worry about being undertrained as there must already be serious doubts about whether the Brighton Marathon will still go ahead. Paris and Barcelona have been postponed until later in the year while Rome has been cancelled outright. Barcelona is now the week after the Great South, so I pop it in the diary. Just in case.

Brighton have offered all the UK entrants from those races a place in theirs. Somebody there is clearly feeling confident that it will go ahead. I’m afraid I don’t share their optimism.

In fact, I’m fast regarding next Sunday’s Ashby 20 as my ‘A’ race for the first half of this year. It’s still on at the moment but they say they won’t be handing jelly babies out this year in case they hand over the virus at the same time. It’s not a loss to me, they always try to choke me anyway.

L has a night out in Waterstones planned for Friday. Her friend has to cancel at the last minute but she goes anyway to pick up a book she’s pre-ordered. Then comes home laden down with several, which I suppose is at least good weight training, but she did say she was only going for one. She corrects me. She said she’d only ordered one book. Not the same thing.

On Saturday we do Wollaton Parkrun as my 101st and bump into our fellow parkrunners from Bramcote\Berlin. Daughter doesn’t join us so we take the car to manage the MD problem. L then does Pilates after which we visit the Derby Runner, where she buys some Hoka shoes, and then we go see her folks.

We stay in later and are largely AF because Sunday is the Retford Half Marathon which goes ahead. It is run by Retford Athletic club and starts again at Retford Oaks Academy where this year we manage to arrive early enough to get in the car park.

The race opens with a brief trip through the town before heading out on to country roads, with one of those annoying out and back sections in the middle to make up the distance. It is on closed roads for the majority of the route with just the last mile back to Retford on opened roads where you need to precariously time your overtaking while running on the narrow pavement.

My time is 1:45:09 this year. That’s not bad and just 9 seconds down on last year, so at least I’m consistent for once. They hand out a running vest at the end, which is different, but won’t be of much use to the majority.

Then I rush back to Derby because football is still going ahead at the moment and Derby have a 3pm kick off against Blackburn. I drop L off four miles from home because she wants to top her mileage up. I bet she was glad of the refreshing shower that the weather gave her.

We go out in Stapleford in the evening and bring home an Indian takeaway from the Park Tandoori.