Monday lunchtime is when I do our weekly shop and this week it acquires extra significance as I head off to panic buy. The only problem is I can’t think of anything I want to panic buy.

Afterwards I report back from the Front Line (Sainsburys) to L. We won't be eating chicken this week as they had none at all but oddly they had plentiful supplies of all other meats and fish. There was no rice or pasta, rather annoyingly as we’re very short on rice. So already it's looking terminal for a chicken curry and that's before I failed to get hold of any cumin seeds... although I'm not saying that's virus related, just as the lack of water chestnuts probably isn't. There was no loo roll obviously and no Bonios. 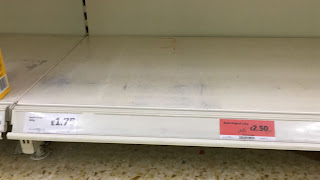 So I got most things. It’s just the Bonios that are critical really.

Later on Monday Boris Johnson holds the first of what will now be daily press briefings as the UK’s death toll tops 50. In it he urges everybody to work from home and to avoid pubs and restaurants. So yes, Saturday was our last night out.

The roads are definitely a lot quieter as I drive into work on Tuesday to be told that most of us will be working from home from Wednesday. We are staying open with a skeleton staff of four people, all in different rooms.

One of the guys at work is told that his Cousin potentially has the virus, so he goes home to self-isolate. As I understand it that doesn’t mean that I have to self-isolating just because I work in the same office. No one’s too sure of the rules but I think you only need to isolate if you have come into direct contact with someone who has it. That’s the UK rule but not the China one.

Frank Turner cancels the rest of his tour. Meaning that L’s not getting a night off from me on Saturday now. The perils of Lockdown.

Broadway Cinema announces it is closing as is Derby Quad.

L wonders whether she should go see her folks. I tell her to go as it might be her last chance for a while, so she does.