We parkrun at Forest Rec this morning and reunite L with her winnings from Thursday. I run with the Lad and we are a bit slower because after doing a long run yesterday my legs don’t wish to career along at his preferred pace.

It’s the FA Cup 3rd Round this weekend and I am one of the fast reducing number of people who still see this as their favourite weekend of the football season. 17,000 turn up to see Derby host Premier League Southampton, around 10,000 less than turned up for the league game with Bristol City the other week. What are these people on? It’s a classic cup tie and Derby come from two down to draw two all. Can’t wait for the replay which is sure to be on TV.

In the evening we make a visit to Broadway.

The Favourite is about Queen Anne (Olivia Colman) who rules Britain from 1702 to 1714. The film portrays her as bit of a sad person plagued by ill health, a recluse and a part-time lesbian. She’s possibly sad because of her 17 failed pregnancies for which she has to show only 17 rabbits representing each one that ended in either miscarriage, stillbirth or a very short life. This I suppose might be enough to make you seek solace in your own sex. 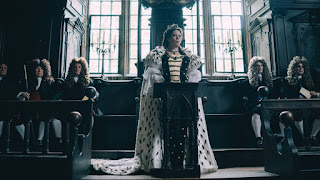 Or possibly sad because of the political turmoil she has to precede over, not that she takes much interest in ruling the country and leaves most of the bickering\blackmailing\murdering etc to her Prime Minister Sidney Godolphin (James Smith) and the opposition leader Robert Harley (Nicholas Hoult).

She does opt to raise taxes to pay for the war with France on the advice of her ‘lady in waiting’ Sarah Churchill (Rachel Weisz), Duchess of Marlborough, the wife of the general who commands the army. Mostly because Sarah is not only in possession of the royal ear but also the royal bed. 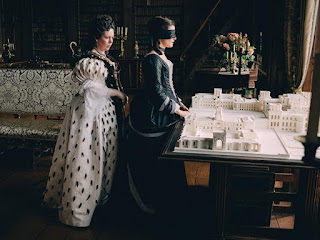 However Sarah’s sexual obligations to Anne are curtailed when Sarah’s cousin, Abigail Hill (Emma Stone), arrives on the scene as a chambermaid intent on shagging her way up the social ladder. Abigail was once an aristocrat herself until her father allegedly gambled her (and lost) in a poker game. I hasten to add there is no historical record to support this nor for that matter Anne’s rabbits. Although with the whole film supposedly being a riotous comedy sticking to the facts is probably not strictly necessary. 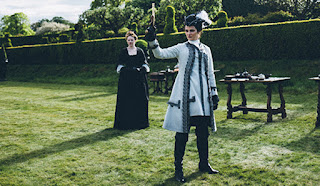 It doesn’t take Abigail long at all to oust Sarah from her role in delivering special services to the Queen while at the same time, conveniently for him, Harley is trying to get Abigail to persuade the Queen to stop financing the war. He strikes a deal with Abigail by offering her marriage, which will restore her status, to his friend Masham (Joe Alwyn) who Harley refers to as ‘c*** struck’ with Abigail.

Abigail though is not so struck with Masham and she consummates their marriage by nonchalantly jerking off her new husband with a look of disgust on her face before wiping her hand on the bedclothes.

Quite where Anne’s husband, Prince George of Denmark, is throughout all this we’re not sure. 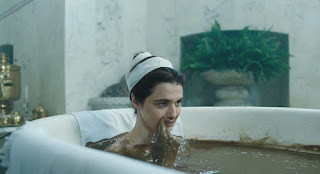 All in all it’s an excellent period romp and all great fun, although obviously not good clean fun. The film boasts three excellent female leads which may stop people pointing out there are not enough female lead roles but probably not. In what is looking to be a very thin year for films it will no doubt pick up an award or three as well as educating everyone with new and varied uses of the ‘c’ word.


Afterwards we revisit the Hockley Rebel which despite being a Tiny Rebel pub still hasn't had proper Stay Puft on. Tonight they do have Sloe Stay Puft which is sadly Stay Puft ruined.