This morning I take my bike into Derby Bike Works for a service as I’ve been struggling with it slipping out of gear. It’s ages since it’s had any TLC, so it’s probably due. L has to stand in and do the dogs this morning. This gives her chance to get back to lead training the Lad, which she said she’d crack over Christmas.... Unfortunately only old age got the other two dogs to walk on the lead.

It’s only after walking the dogs that she tells me she’s struggling with the symptoms of Toxic Tea Syndrome. This is how she dismissed the fact she’s ill and blamed the ‘free’ tea at Rough Trade yesterday. I’m not sure about that. She makes it to work but is then quickly sent home. It’s amazing she managed to walk the dogs at all this morning.

When I am back at Rough Trade this evening she advises me to keep off the tea. That was never a likely option.

When the Twilight Sad came on the scene their gigs were an unrelenting sea of guitar noise, feedback and pounding drums all played so loud that it pinned you to the back wall of whatever venue you happened to be in. Amongst it all though they also had a ear for a great melody and they also had James Graham’s amazing voice.

Over the years, and through their four albums and numerous EPs, they have mellowed. Their sound is less aggressive, they use a lot of synthesizers now, and their demeanour less, well ‘sad’ although still decidedly dark. Yet despite this even moderate mainstream success still eludes them.

Now we have album number five ‘It Won/t Be Like This All the Time’ which not only eschews an apostrophe but also a launch tour that includes the full band. Instead we have a few ‘stripped back’ acoustic dates chucked in free with the album purchase which involves only James Graham and guitarist Andy MacFarlane.

Although the guys have set up an amplifier they ask if it’s ok if they do it without which is about as stripped back as you can get. That’s fine by us and it’s a fair assumption there’s going to be no one pinned to the back wall tonight. In fact, who’d have though ten years ago that you’d be able to stand right in front of the band without feeling your ears bleed. 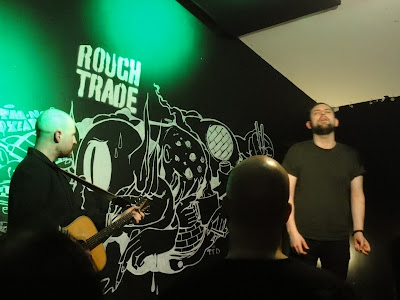 It’s also a bonus to be able to make out every word of the songs and get a better sense of why Graham immerses himself so much into them.

They play ten songs tonight, five of which come from the new album which they have worked on with the Cure’s Robert Smith although that probably isn't too obvious acoustically. This includes the amazing ‘VTr’ which is as good a tune as anyone will produce this year.

To close we are treated to non-album single ‘The Wrong Car’ and the song they all know as ‘Rabbit’ or rather ‘And She Would Darken the Memory’. Sadly some of the audience sing along with every word which for a acoustic show is a bit of a downer because Graham can’t drown them out but it’s kind of sweet I suppose.

In fact the whole thing is rather sweet, which I never thought I’d say about the Sad but it's also totally excellent at the same time. Now please get your ****es back down here with the rest of the band pronto.

Posted by FitForNothing at Monday, January 21, 2019