It’s straight back to work on Monday where we both head unshowered because while we were away our brand new boiler failed. The dog sitter is blaming herself but when I get the chaps who installed it out to have a look at it they point to a broken fan. Which they say they can’t fix and we have to place a service call with Baxi. Which we do and they come out to fix it on Tuesday.

Later on Monday, the Lad is at the vets for his booster, which he thoroughly enjoys. He loves meeting people, even vets who about to stick a needle in him. It’s also time to renew his insurance which the insurers won't talk to me about because it’s in L’s name. They refuse to accept that I am called L and I’m non-binary. So I have to get L to give them permission to speak to me.

Keith Flint dies, only days after clocking 21:22 at his local parkrun. If we’re looking for positives in anyone’s death, then that’s not a bad one to go out on.

Tuesday evening brings the match, Derby v Wigan. While I'm at my parent’s house my Mum confesses she’s had another fall. This was a few weeks ago but she has neglected to mention it. That’s where I got that trait from. I leave her with a box of Polish chocolates, I’ve got a nice big block for us. 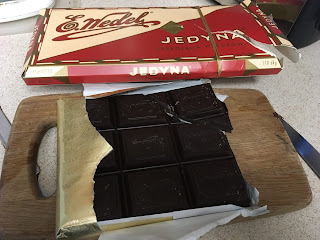 It’s so thick it’s unbreakable and has to be attacked with a huge chopping knife.

On Wednesday I’m back on the bike which gets very wet on the way home, it’s dog training in the evening and Magenta Devine joins Keith Flint in the past tense. They're dropping like flies.

Thursday sees L kick off a new dog walking regime. She is going to take the Lad out for a pre-walk, so that hopefully he’ll learn to walk better on the lead and it will add a bit extra to his day, while I attempt to console the inconsolable MD while also trying to have a shower at the same time. Then I will take them for their usual park session.

I spend the day up at a meeting in Chesterfield but I’m back in the office in time to do my now usual run home although it’s not exactly perfect running weather. It's very windy and rain is forecast. I could defer it to tomorrow but the forecast looks just as bad tomorrow and colder.

L says she’s happy to pick me up somewhere provided she still makes her tennis. That is if she’s able to drive after her PT session, she claims to have crawled from the last one. I manage my run, without incident.

Posted by FitForNothing at Thursday, March 07, 2019