Not Saving The Legs

Possibly I should have saved my legs for tomorrow’s 20 mile race today and not done Parkrun but I don’t. Having decided to do Parkrun, I should have probably taken it easy but the Lad has other plans.

We run at Shipley Country Park and come 4th overall in a time of 21:55. The Lad is again disappointed with me as we were 3rd with less than a km to go. Clearly he’s not happy with merely being first dog.

In the evening I rest my legs by going up to Sheffield to see the Slow Readers Club.
Support is from a super group called ShadowParty who consist of some of the members of Devo and New Order although they are not the ‘big’ names from those bands.

The lead singer is Devo’s guitarist Josh Hagar and originally he was joined by drummer Jeff Friedl but Friedl isn't touring with them on this occasion. From New Order we have Tom Chapman who was Bernard Sumner's bass player in Bad Lieutenant before Sumner invited him to replace Peter Hook in New Order and we have Phil Cunningham who has been their guitarist since 2002. 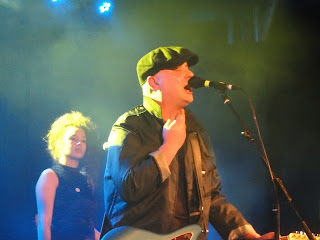 They released an album last year which only really gives a cursory nod to both 'source' bands. That’s not to say it wasn’t decent and it sounds good live but then with all that experience in the band you’d assume they know what they are doing up on stage. American Hagar is quite chatty frontman too even dedicating one song to ‘our horrible orange man'. I wonder who he means.

They are joined on stage by Ellen Lewis, who must be half the age of the rest of the fortysomething band, and she takes lead vocals on one track 'Present Tense' while offering keyboards and backing vocals on the others. Overall, they are pretty good.

Talking of fortysomethings, before the Slow Readers Club come on stage I get chatting to the chap next to me who is a big Readers fan and says he has seen them loads of times. He says the crowds at their gigs are fantastic e.g. just like the old days e.g. lively. ‘The old days’ he says, are the ones that ‘fans like us in our late 30s and early 40s remember fondly’. As he has totally misjudged my age, we are now best friends forever.

The Slow Readers Club have been slow burning their way through the conscience of the nation over the last eight years. Yes, there’s been nothing quick their rise and they have built the band up the old way, the hard way, through gradually building a fanbase. They remained unsigned, while still maintaining day jobs, until their third album was released last year. Finally, now the band have managed to go full time as a band.

They are about a third of the way through a massive 48 date UK and European tour and tonight they have sold out the Leadmill, making it their biggest gig so far outside of their homeland of Manchester. 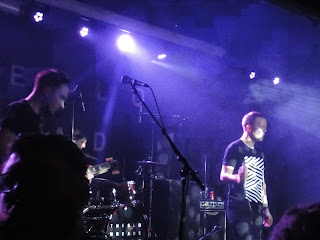 They open with ‘Lunatic’, the big commercial moment from that third album ‘Build A Tower’. Everyone knows it and singer Aaron Starkie has to raise his voice to be heard above the singing crowd. From there, the only way could have been down but the Readers have too many good songs for that. 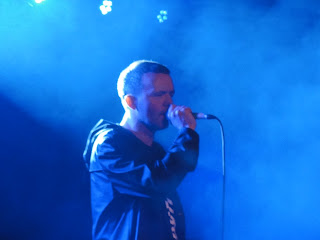 ‘Lives Never Known’ is followed by debut single ‘Sirens’ but they have so many good songs in fact that mixing the set up every night isn't a problem. The 17-song set is pulled in almost equal measure from all three Readers albums with songs from different albums segueing faultlessly into each other. Such as the excellent transition of ‘You Opened Up My Heart’ into ‘Plant The Seed’. In amongst all the old favourites is a brand new track ‘The Wait’. 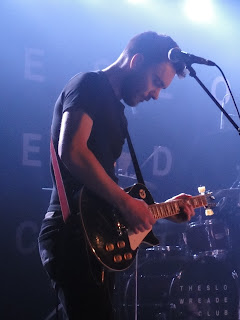 ‘Forever In You Debt’ slow builds the start of the finale from which ‘Feet on Fire’ and ‘I Saw a Ghost’ from the excellent ‘Cavalcade’ album follow. Then finally their latest single ‘On The TV’. There is no encore, they have already left it all out there.
(Saturday 16th March)
Posted by FitForNothing at Saturday, March 16, 2019