The Man With The Gun

We fly out to Warsaw with Wizz Air who are quite impressive and seem to know what they are doing. Then starts the beginning of a four day challenge to understand the train network and how you pay to travel on it.

We did think we were getting the hang of it, which seemed to involve buying tickets which are time limited for 20 minutes rather than for a destination, until we got too clever and tried to get on at a different stop. Where we got the wrong platform, bought the wrong ticket, boarded the wrong train and were probably on the verge of getting arrested when the conductor seemed to realise that he really couldn’t be bothered dealing with the incompetent British and lets us off.

We stay in the Holiday Inn, which is very nice and even has its own gym which L insists we try. It’s on the 16th floor, so there’s a pretty good view. Much better than the Nottingham City Council gyms which usually leave you staring at a wall. I’m really impressed by L who puts aside her fear of heights and manages to use all the equipment with her eyes open.

We are here mainly for the UCI Track Cycling World Championships which are held at the BGZ Arena in Pruszków, which is basically a suburb of Warsaw. The Arena is no bigger than Derby’s Velodrome which makes you wonder why we can’t have these sorts of events there. There is a lack of food places at the Arena and the only restaurant, which does 'all you can fit on a plate' for a set price, seems to be packed out with team personnel and officials. We never really figure out if we’re supposed to be in there or not, but we go every day and never get turned away. 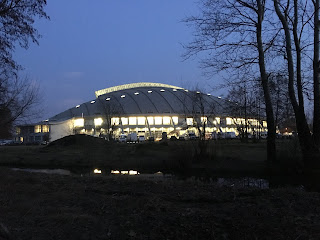 Of course we expect to see Team GB bringing home loads of Gold but they let us down badly. Their only goal coming on the Wednesday before we arrived.


We have three set of tickets, an evening ticket for Thursday and all-day tickets for Friday and Saturday.  Although we don’t spend all day there and on Saturday end up in the embarrassing situation in that everyone is contacting us saying they are looking for us on TV when we’re actually still sat in the hotel. 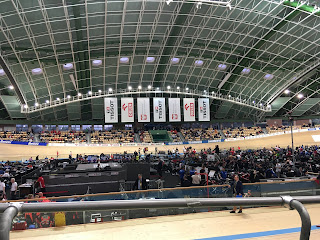 This was after Saturday’s parkrun. Yes, there always has to be a parkrun. About half an hour from the hotel we found Parkrun Pole Mokotowskie. It was a small event by UK standards but very welcoming and very multinational. The run itself was hard as I had to attempt it without my usual dog power but the fact they had a man bringing up the rear with a rifle (we really have no idea) did stop you slouching at the back.

We find a couple of excellent bars, both Kufle i Kapsle and Ja Beer Wocky serve a mix of Polish and other European craft beers and both have a couple of hand pulls with English beers on. 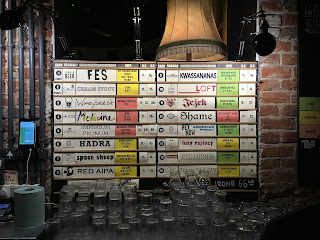 We even do a bit of sightseeing and go see the old town, vindictively destroyed during the war and painstaking rebuilt since. It's a great city and already on the list for a return visit one day.