It’s holiday time and the first task is to drop the dogs off at kennels. MD and I are distraught at this prospect whereas L and the Lad are doing cartwheels. The Lad is so excited that he practically jumps up on to the desk in reception to introduce himself.

Then we head down to Heathrow, from where we have a mid-afternoon flight to Oslo. We fly over with SAS and then spend the night in the Park Inn at the airport, which takes a bit of finding. It is there that we are introduced to the realities of life in Norway e.g. £9 for a beer, and a similar hike in food prices. The food though is of high quality and always seems to come with a unlimited supply of bread.

The next day, we pick up our hire car from Hertz which of course comes with the usual unavoidable free upgrade to a far bigger car than the one you want. Hertz say they don’t have anything smaller despite the fact my booking gave them a month’s notice to find one.

Then we have a two hour drive across an incredibly flat looking country which perhaps explains why Cross Country rather than Alpine skiing prevails here. There is, however, oodles of snow everywhere, even at airport. Then suddenly, as we approach the Swedish border, a small cluster of mountains appears. This is where we are headed. 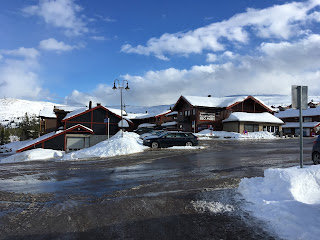 We arrive in Trysil where we are staying at the Trysil Hotel which is a reception-free hotel and there are no keys either. They text us a keycode for both the entrance door and our own room. The other quirk of the Trysil Hotel is that it has its own brewery. Any thoughts that I booked this place deliberately can obviously be dispensed with but we would be mad not to check it out. So we do, every night.

There are twelve beers on their blackboard of which we chalk off nine on the first night with the help of a tasting palette. The other three last only as far as the next night. Towards the end of the week they introduce a thirteenth, a porter with no name which I name after absent furry friends. 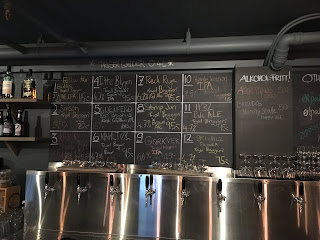 We eat in their Kveik Restaurant every night where the food is excellent and I can heartily recommend the Elk Kebab. Everything comes with a large jug of water (from which we start to develop a water obsession) and the standard generous portion of bread which, in this case, is from the Kort & Godt craft bakery next door. This is also where we go for breakfast which is a standard sort of continental affair but also with the local delicacy of Brown Cheese.

The meals are very expensive but for some reason our barman, who works every night we are there, always seems to leave a few beers off the bill. I can’t work out whether he’s doing this deliberately to be generous or whether he’s just incapable of getting the bill right. We don’t complain.

They do have a cunning ploy in Norway to make you think that you aren’t being fleeced. Nowhere that we went accepted cash. So we never even bothered bringing any Norwegian Krone with us and we never saw any. Everywhere makes you pay on card. This means you also barely notice that a cup of coffee is no cheaper than a beer.

The Norwegian's also seem to have a weird toilet fetish.This is just one of the strange characters I met. 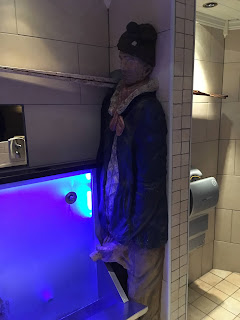 The skiing itself is good and not much different to what you’d get in the Alps. Possibly slightly easier due to lack of height of their mountains and definitely windier do to lack of mountains providing shelter. 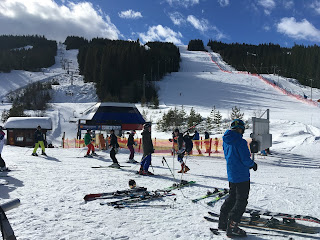 We liven things up on the second day by deciding to get Nordic and have a go at Cross Country. I’ve done 30+ years of doing 'proper' skiing and in all that time I’ve never seen such flimsy a pair of skis. 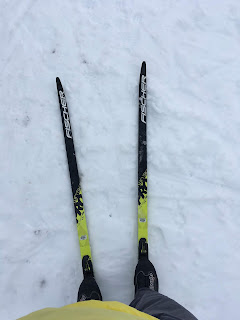 Anyhow, we hit the cross country trails with our instructor Erik who is big on advice but low on sympathy. How hard can it be though, it’s all on the flat isn’t it? Apparently not. The first lesson to learn is how to go downhill and how to stop. Which is, we are told, exactly the same as with ‘proper’ skiing except for the flimsy things on your feet and the fact that your heel isn’t clamped down. The only thing I find easy is falling over backwards. Erik advises that you need to snowplough, like when you were eleven.


We must have enjoyed it as we do it again two days later. 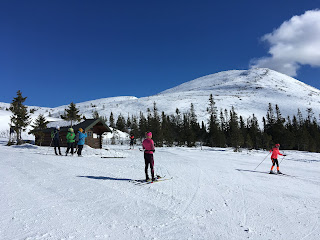 All too soon the holiday is over and we have to say goodbye to the brewery and the cross country embarrassment while my credit card heaves a huge sigh of relief. We haven’t even done a Parkrun. There are only four in Norway, none of which were very handy for this trip. So it’s a good job L’s not obsessed. It’s also a shame they’re all on Saturdays because looking at Scandinavia as a whole, there’s a nice little tour to be had there.

Back at the airport, SAS demand a ridiculous amount of money to transport our skis home despite Heathrow not charging us on the way out. They point to their hugely ambiguous terms and conditions that clearly I and Heathrow interpreted one way whereas Oslo Airport interpreted another way. I dig my heels in, refuse to pay and ask where I can abandon our skis. They agree to carry them free of charge.