L has been remarking how lacking her World War II knowledge is. She says that her colleague at work watches all 26 episodes of the World at War at least every other year, which is perhaps a bit excessive but we start looking for a copy. I pop into Argos who have the box set for £15. This will change the dynamic of Friday night’s somewhat. L promises to try to stay awake.

The brief for Saturday is to Parkrun somewhere exotic. Unfortunately Warsaw is going to be a bit hard to beat and we go to Sherwood Pines. The Lad and I come 21st in a time of 22:16. Not bad but I feel he’s disappointed with me.

On Saturday afternoon there’s a match and then in the evening we are at Broadway.

Border is the story of Tina (Eva Melander), a customs officer on the Finland-Sweden border. She suffers from deformities which she refers to as a ‘chromosome flaw’ but she has the ability to smell guilt which comes in extremely useful in her job. When she smells something amiss the suspect is pulled over and searched. Tina is always right. When she intercepts a man carrying child pornography, she is invited to join the police task force investigating a paedophile ring which has implications later in the film. 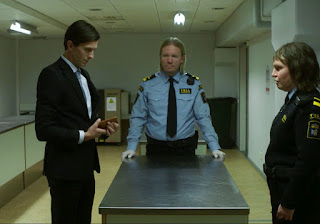 She lives with her boyfriend Roland (Jörgen Thorsson) who she is unable to have sex with because it hurts her too much but, anyway, Roland seems to care more about his pet dogs than he does her. Every so often, she visits her elderly father (Sten Ljunggren) who is in an old people’s home. It appears her father is hiding something about Tina’s past.


One day at the border, Tina encounters a character who looks a lot like herself. His name is Vore (Eero Milonoff) and he travels with a bag of maggots in his hand luggage. As you do. Unlike Tina, Vore is confident and charismatic. When Tina can’t quite decide what she smells amiss about him, he arrogantly volunteers to be searched anyway. During which her male colleague discovers that Vore doesn't have the body of a man. He also has a large scar on his back, just like she has. 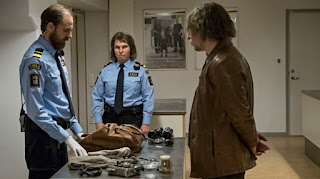 She finds him intriguing and exciting, so inevitably they are drawn together. She lets him stay in her house, much to Roland's annoyance. Vore tells her that it’s perfectly ok to eat insects if she wants to because she is a troll just like him. Then they have the most bizarre sex you’ll ever see. 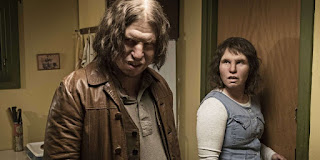 So it’s a Troll RomCom with a happy ending? Not quite. The next day Tina finds a baby inside Vore’s fridge. As you do. No, not a baby he protests. It’s a Hiisit, an unfertilized troll embryo, that he is going to swap with a real human baby. Of course…

Which brings us back to the paedophile ring, with whom Vore has been dealing and which brings us to the film’s very morally susceptible ending. 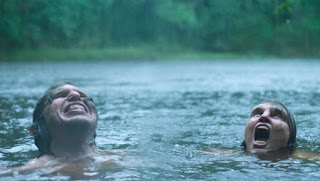 It was looking to me as if the film was trying to portray Tina and Vore as more humane than the humans, through the use of the paedophile ring subplot, but now I’m not so sure.

The film is based on a story by John Ajvide Lindqvist, who wrote the almost as weird ‘Let the Right One In’. You have been warned but I liked it a lot.