We have dog trouble. He still hasn’t raided the fridge but Doggo is stressed. He is finding the wooden stairs to the bedroom a touch slippery.

We start looking at some stair treds e.g. bits of carpet to ease his path.

Perhaps not...  not sure we would persuade him to use that. 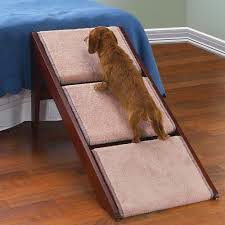 Not sure that he’ll get his head around that either.
We'll shove a plank against the bed later and see if he walks up it. Perhaps he’ll think he’s back doing agility and it's the dog walk.

We also put the duvet from the old bed on the floor for him. I suspected he’ll purposely avoid lying on it or he’d hump it but the optimist in us says that he will find it familiar and will sleep on it.

I’m out with old school friends in Derby tonight which gives Doggo the excuse to hang out by the front door waiting for me.  When I get home and escort him upstairs he lies down on his duvet. Result.