I have entered this evening’s Castle Rock 10k, which was known for most of its existence as the Jagermeister 10k. it is basically two laps of the campus at Nottingham University. It’s not particularly thrilling and certainly not flat but it’s a good workout.

It’s also a workout I need. Amazingly I’m feeling uninjured and slightly confident for it. Probably won't last though.

I take the bus to work and then hop off outside the Uni on my way home. I collect my number and then commence a huge warm up which is all about calf preservation. L informs me she is on the way up with the dogs, which could take a while given Doggo’s elderly gait. She also tells me to make it quick as she wants to get back for the opening ceremony of the Olympics. I sincerely hope she’s got her times mixed up as I believe due to the time difference it doesn't start until midnight.

The race HQ is on the grassland opposite the Sports Centre where it usually starts. The Sports Centre is closed and being rebuilt yet again. This seems to be almost an annual occurrence so soaked in money these Unis appear to be these days.

We set off and I soon see L and the boys by the Nottingham sign offering vociferous support. 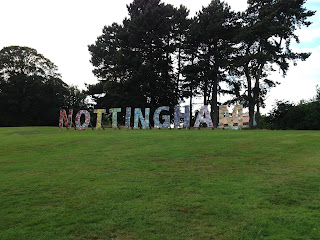 She shouts that one of our Thunder Run team mates is just ahead, so I put on a spurt and catch him. We exchange ‘pleasantries’ before I move on ahead, now of course feeling under pressure to stay there.

I try to maintain 45 minute pace all the way around and although at one point I was hopeful of dipping under that, it is what I ultimately achieve. I've got to be happy with that after running a 49 just a month ago at NotFast.

We skip the, not very tempting, Harvest Pale and head home. Ceremonies to watch and all that.