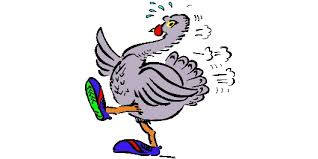 It’s a relaxed 10:30am start for today’s Turkey Trot Half Marathon. L thinks I’m probably a little too relaxed.

The only problem with the 10:30am start is that it means I’ve had to choose between the run and Derby v Forest which kicks off at noon. Obviously it didn’t kick off at noon when I booked the race but that’s Sky TV for you. The run wins though, as I’ve been waiting for years to get an entry in to this sold out race.

The start is at the South Wolds School in Keyworth where they have t-shirts for sale with everyone’s name on the back. Which is a cunning ploy and obviously I have to have one. I assume that means there isn’t one at the finish but apparently they have different mementos each year.

The course is a big loop through what I believe is known as the South Nottinghamshire Wolds taking in the villages of Wysall, Willoughby-on-the-Wolds and Widmerpool with a few undulations on the way.

The biggest undulation is the one at three miles just before Wysall, the rest is pleasantly teasing and I enjoy the terrain. Obviously it’s not going to be a fast course but I’m still a little disappointed with my time of 1:46 but then I haven’t done any training other than a few parkruns. I'm probably more annoyed with it because the race seems to have pulled a very fast field.

This year’s memento turns out to be a medal, trust me to pick this year. Then it’s mince pies and a cuppa before being reunited with my loyal supporters, L and the boys.

My brother enjoys my match ticket as Derby defeat Forest 3-0.

In the evening we were due to visit Son in Leamington but he’s in bed ill so we decide to do a film and a pint instead. I’m picking the film though. Even L seems fed up with her own choices although they have all been talking points. So after some food a Broadway and two pints of Centurion it’s Snowden.

Snowden tells the story of the events that led Edward Snowden to becoming one of the most wanted men in the world.

Snowden (Joseph Gordon-Levitt) was a computer expert who got his dream job with the CIA (Central Intelligence Agency). As a strong believer in his country it was the perfect job for him, helping to track the spies and terrorists that wish to cause damage to this country. 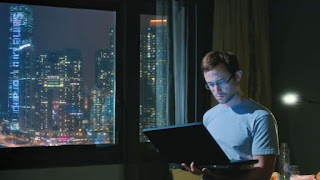 The film tracks his rise through the ranks of the intelligence community from his military service, his stationing in Geneva and Japan, then finally his employment with the NSA (National Security Agency) in Hawaii. Where they have a facility that is right out of any James Bond film.

At first he loves he job but then his conscience started bothering him when he discovers that besides spying on other countries and terrorist organizations around the world, the government also has a massive espionage network in place in the USA itself. In fact twice as much data is being taken from the USA as it is from Russia. 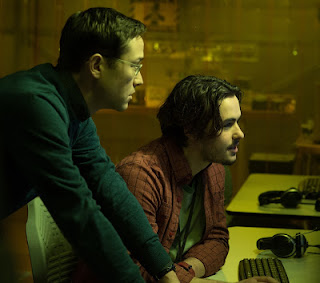 What's mind-blowing is the sheer scope of everything the surveillance program comprised. How the NSA can link up computer to computer and therefore person to person using all their available technological devices. If you believe it, and this film is telling you believe it, then it is chilling. So do what Snowden does and always put a sticking plaster over your laptop’s webcam when you’re having sex with your girlfriend. 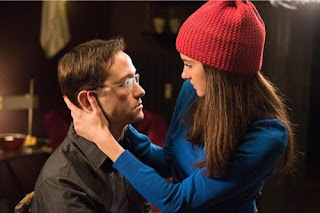 His girlfriend is Lindsay Mills (Shailene Woodley) and she is alongside him all the way, being shunted all around the world, yet she has little idea what he is up to most of the time and naturally he can’t tell her. 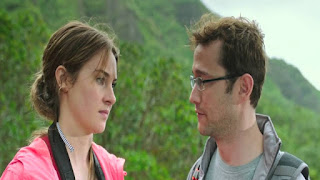 She stays impressively by his side throughout even he downloads evidence of the surveillance program and flies to Hong Kong with it. It is from a hotel there that much of the story is told in flashbacks as he reveals all to documentary filmmaker Laura Poitros (Melissa Leo) and journalists Glenn Greenwald (Zachary Quinto) and Ewan MacAskill (Tom Wilkinson) of The Guardian. 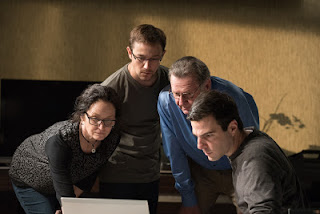 When they publish his revelations he has to go on the run and winds up at Moscow International Airport, where he becomes a fugitive charged under the Espionage Act for revealing classified information. The government and the media initially portrayed him as a spy but as everyone took in the information he had revealed public opinion generally swung behind him but the government’s stance remains the same and he remains in Russia, although not at the airport, to this day.

It’s a very well made film, informative and riveting which keeps you engaged and more importantly gets you thinking. It’s also well acted and well directed by Oliver Stone, a man well known for his critiques of the American government. Consequently the film perhaps does try a little too hard to paint Snowden as a hero but then, perhaps he was.


We dissect the film afterwards in the Lord Roberts.