Today is a rare Saturday night out for us and we go to Broadway to get a meal and to take in a film.

Blindspotting is another film about racial bias but one with a different angle. The screenplay is written by its two lead actors and is set on the streets of Oakland, USA. It is here where Collin (Daveed Diggs) is working as a white van man alongside his childhood friend, Miles (Rafael Casal). 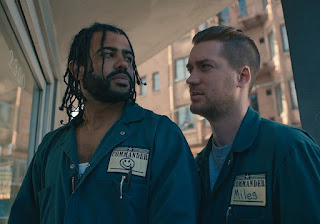 Collin is a former prisoner running down the clock on his last three days of probation and is therefore desperately trying to away from any trouble. Then, with his parole completed, he can move out of the halfway house he's living in and move on with his life.

The problem is that staying away from trouble isn't easy when your best friend is someone who seems to be seeking it out. Collin is a black man and Miles is a white man, but Miles is the one who acts and talks like a black gang member, something that Collin now finds very clichéd. 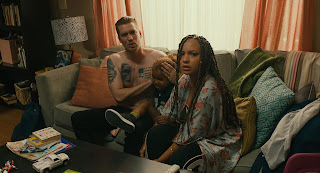 The social landscape of Oakland is changing fast and the once dominant black culture is being pushed aside by the incoming hipsters and their kale smoothies. Collin embraces this but Miles seems wrong footed by it all. 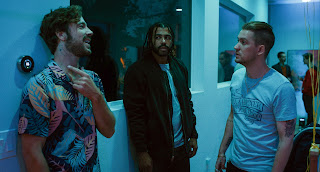 One night, just before his 11pm curfew, Collin sees a white policeman (Ethan Embry) shoot an unarmed fleeing black suspect in the back. He is faced with the dilemma of whether to report the incident or not. If he does, he’s admitting he was beyond his curfew which could potentially put him back behind bars. So he doesn't and goes off to get his hair done instead. 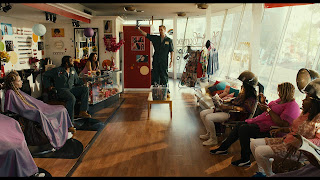 They both work as white van men for a removals company where Val (Janina Gavankar) is their boss. She used to be Collin's girlfriend until the things that happened that sent Collin to prison happened. It is some way into the film until it is revealed what actually happened and why Collin is so keen to move on.

Then, while on a removals job, he comes face for face with the policeman.

Excellent film. Well worth a look.

Afterwards we check out the Peacock for the first time in ages. Sadly the Old Peculiar is off, not that it’s been in great shape the last few times we’ve been. They do have a decent porter instead.