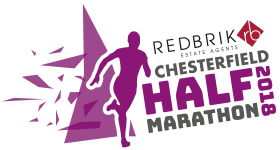 Possibly the hardest part of today’s Chesterfield Half Marathon was getting there as the main A617 in to Chesterfield was closed very early and we really had no clue where to go.

After accosting a marshal, who also didn’t have a clue, we ended up driving down a section of the course that wasn’t on the A617 rather than the bit that was, that they had diverted us away from. Bizarrely we were then directed to re-join A617 closer to the town centre. Having got that far we were then directed to a car park literally in spitting distance of the start in Queen’s Park. So at least that bit was good.

As well as the Half Marathon, there was also a five mile event which L lined up in and both races started at the same time. There was then a split after the first mile and they went on to do the last four miles of our route.

After a brief sightseeing trip through the centre we were sent on a three mile jaunt out along the aforementioned closed A617 before we left the dual carriageway to follow the way we drove in on, which was a much more minor road. Then back in Chesterfield there was the loop the five milers did before the finish back in Queens Park.

The route, is has to be said, ran better than it drove! My time of 1:46 is nearly two minutes slower that Nottingham but within the bounds of acceptable.