There are multiple parkrun cancellations this week - Alvaston, Markeaton and Clumber are all off for various reasons. Daughter isn’t around again, so it’s basically where will best suit my ankles and the Lad’s tendency to get overexcited. L says we’ll see how we feel when we get up. We don’t get up.

This may be a wise choice as we the Round Sheffield Run on Sunday.

The rest of Saturday is spent sneering at those who are where we aren't, namely Glastonbury, but then in the evening I do get to see some live music as I go to Rock City to reacquaint myself with the Fields of the Nephilim.


Support comes from Red Sun Revival, who I didn't know before tonight but they seemed a good choice for the evening as they brought their own brand of Gothic style indie to the table. They aren't new, having been going since 2011 which probably explains why Rob Leydon comes over as a very accomplished front man. 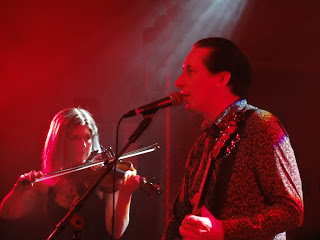 They make good use of Christina Emery's violin which isn't drowned out by the rest of the instruments and gives a certain uniqueness to their sound. It also helps that they are clearly very happy to be here and are given a generous 45 minute set which goes down very well with the crowd.

I’m not sure what the Fields of the Nephilim think to pretty much the entirety of The Mission’s ‘First Chapter’ being played as a prelude to them coming on stage but then I suppose those feuds amongst the various Gothic bands were a long time ago now.

The last time I saw the Nephilim was almost exactly 29 years ago... although after the original band broke up in 1991, I did see Carl McCoy’s short lived variant The Nefilim only 23 years ago ... So, on many levels, as one by one the members of the band emerge out of the haze of dry ice dressed in their trademark Spaghetti Western outrider outfits it is reassuring that not much has changed.

That they emerge to their version of Ennio Morricone’s ‘The Harmonica Man’ from ‘Once Upon A Time In The West’, the track that opened the ‘Dawnrazor’ album back in 1987, it is reassuring that not much has changed. 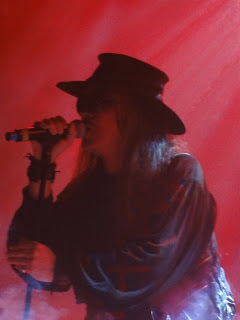 Yes, the line-up has changed over the years but not McCoy himself, for it seems to have always been his band, as he leans into the mic stand and lets loose with his distinctive voice as we move into the magnificence that is ‘Preacher Man’. A track that over three decades since its release still has the ability to raise the hairs on the back of your neck when they play it live. 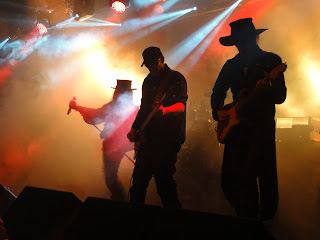 The only other original member aside from McCoy is Tony Pettitt, who returned to the fold a few years ago, and who stubbornly seems to refuse to adhere to the memo that governs the dress code. So no cowboy hat for him which makes him standout like a sore thumb which is perhaps his intention and perhaps the only way he could steal some attention away from the lead singer.

The setlist pulls on their theatrical masterpieces largely from ‘The Nephilim’ album which means ‘Endemoniada’ becomes ‘Love Under Will’ before we turn to ‘Dawnrazor’ itself, which is epic in so many ways. 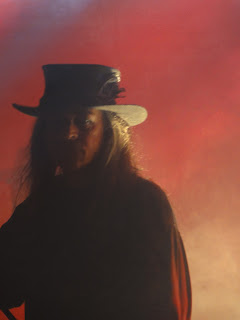 At which point I am struck by the thought that not only has McCoy no right to still be able to sing like that after all these years, he also still has hair when none of the rest of us have. In fact he’s got more hair than all the men in the audience put together. Must be a wig. May have always been a wig...

‘Hit single’ ‘Moonchild’ follows and then becomes ‘The Watchman’ before they dip into ‘Elizium’ where the almost poppy ‘For Her Light’ merges, as ever, into the more sorrowful ‘At the Gates of Silent Memory’. 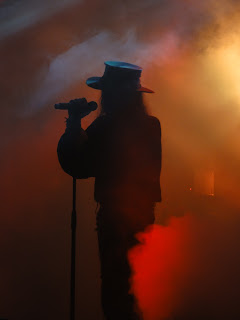 Then there’s ‘newer’ material in 2005’s ‘Mourning Sun’ and 2016’s ‘Prophecy’ before a magnificent ‘Last Exit for the Lost’ closes the show in some style.

The setlist isn’t short on length but is short on songs and it would have been nice to have had some of the shorter punchier songs, mainly from the really old days, thrown in. Maybe one day but for now this is what they do and they are doing it very well.