Round And Up Sheffield 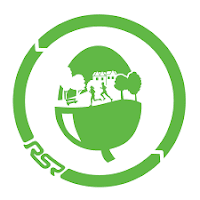 We managed to get places in the legendary (I believe, not that we’d heard of it until last year) Round Sheffield Run by way of their ballot, which digitally collapsed but still worked out for us. So here we are at Endcliffe Park faced with the usual enormous queue but in this case not just for the toilets but also to actually cross the start line. Not that you could actually start until your colour came up and we were in the last start wave anyway at 10:15. So no great rush for us.

Round Sheffield is a 20km run broken up into eleven stages. You carry a 'dibber' like we do with Orienteering and 'dib' in at the start and end of each stage. The stages have recovery breaks between them which total a further 4.5km of walking\collapsing on the grass gasping for breath. Which means it’s pretty much a half marathon where you have full permission to walk bits of it and\or grab a quick nap. Easy peasy then. It is based on the popular 14 mile Sheffield Round Walk and was launched in 2014.

The longest stage was the first one at 2.9km and this was a slightly uphill jog out of Endcliffe Park to somewhere called Forge Dam (I don't know these areas of Sheffield). The start of the second stage was almost straight after the first and I was straight on to it. This was said to be the toughest stage and it was certainly nearly all uphill. It was up Ringinglow, so mirrored the Sheffield Half Marathon but via an off road route. It also brought us to the first of two feed stations although this felt a bit too soon, so most people didn’t seem to bother.

Then we had two downhill stages, one of which was termed the Limb Valley Descent no less, and this took us down to Dore.

Stage Five was interesting. First it was a long walk, so you felt something serious was coming... then we had to climb a long set of steep steps to get to the start point. Personally I'd have started the stage at the bottom of steps but I can understand why they didn't. This was also where I started to get frustrated at being in the last start group because as soon as anything got remotely difficult people started walking and there often wasn't much opportunity to overtake.

Stage Six was a mere 0.8km of undulating terrain which was then followed by a short walk to Graves Park where Stage Seven was pretty much all uphill. This brought us to the second feed station which this time was very welcome.

What comes up must come down and both Stages Eight and Nine were downhill, one alongside a golf course and the other in Meersbrook Park which was only 0.8km long and seriously steep, downwards, with a great view of Sheffield.

The penultimate stage was initially a road stage and started in the street but it didn’t stay there as we were soon into more woodland and obviously none of it was flat.

We were back in Endcliffe Park for the final stage which was termed as a 04.km sprint back to the race village. Not that I really bothered to sprint, I could already see that the queue for the beer tent was huge. Which I then joined as I waited for L.

The other problem with being late starters was that the food stalls had hardly anything left to eat that didn’t include tofu.

It was certainly a different running experience because stopping mid race is normally avoided. I did like the concept but I would probably have preferred less but longer stages. I am now more into my longer distances and none of the stages were long enough for me to get my teeth into. Stop-start is not really my thing. In fact it didn't really feel like a race at all, it was more like interval training. I suppose you could have done it all non-stop or even ran the whole 24.5km but that didn't seem in the spirit of the things or indeed very wise.

I completed the distance in 1:49:34 which made me 629th overall out of 2067. My best stages were Stages Two and Seven, the hilliest ones, where I broke into the top 400. My slowest stages were Nine and Eleven, showing I’m a hopeless descender and that I couldn’t be ***ed to sprint at the end!

It was a good experience but I'm not sure I'd be too bothered about doing it again.

We hadn't taken the dogs with us, so we felt duty bound to take them out with us later. So we take a trip to the Plough where we haven't been for many years. It hasn't changed much although they do at least seem to have a dark beer on again, Foundry Mild which is a pleasant strong mild.