Splendour In The Rain


L truncates a rare lie-in day by booking to go to pilates at 11am, although I guess this is hardly early. I also need to get the boys on the park swiftish before the festivities start and the torrential rain that is predicted.

The festivities are the Splendour Festival which once our old pals Scouting for Girls were added to the line up became unmissable obviously... well, not really. It’s becoming a bit of a tradition to go to Splendour even if, like this year, there is absolutely nothing on the main stage I fancy but the second stage looks ok, so here we are.

There are actually five different stages, but we don’t really go a wandering, and a visit from boxer Carl Froch but we don’t see him either.

The Beat are playing as we walk up, after delaying our departure due to one of the many cloudbursts. They are oddly way down the bill. 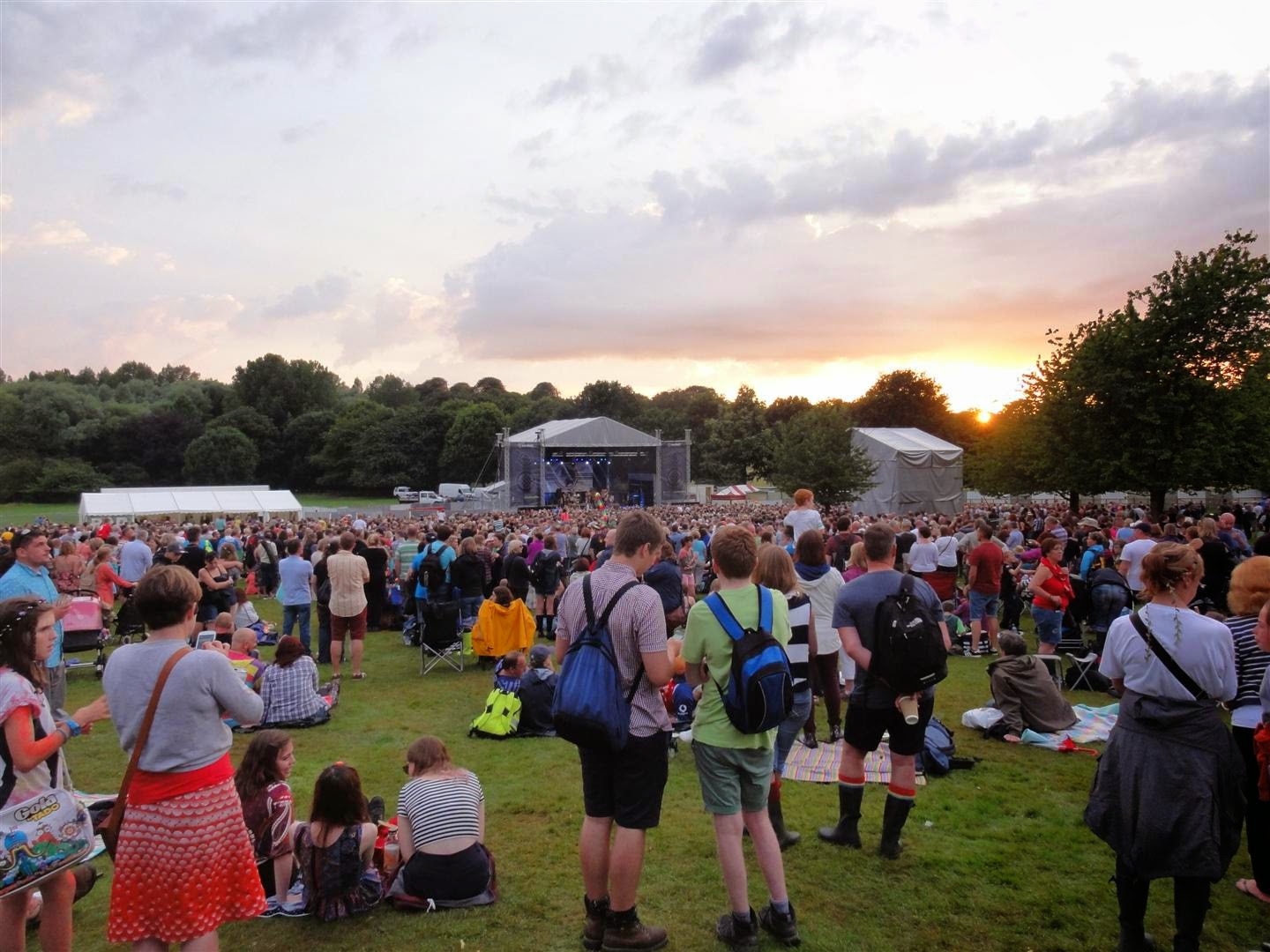 Amber Run are the first band we catch in the flesh on the Confetti second stage, just one of thirteen Nottinghamshire acts on the bill today and the first of many cut and paste indie outfits.

Saint Raymond is another local and is next up on the main stage. Singer Callum Burrows has upgraded himself to ‘Saint’ and this year Splendour have upgraded him from second stage to main but we’re in the beer tent from most of it...

And here’s another Notts act, A Plastic Rose are up on the Confetti stage. More cut and paste indie but certainly a cut above stage’s previous occupants. 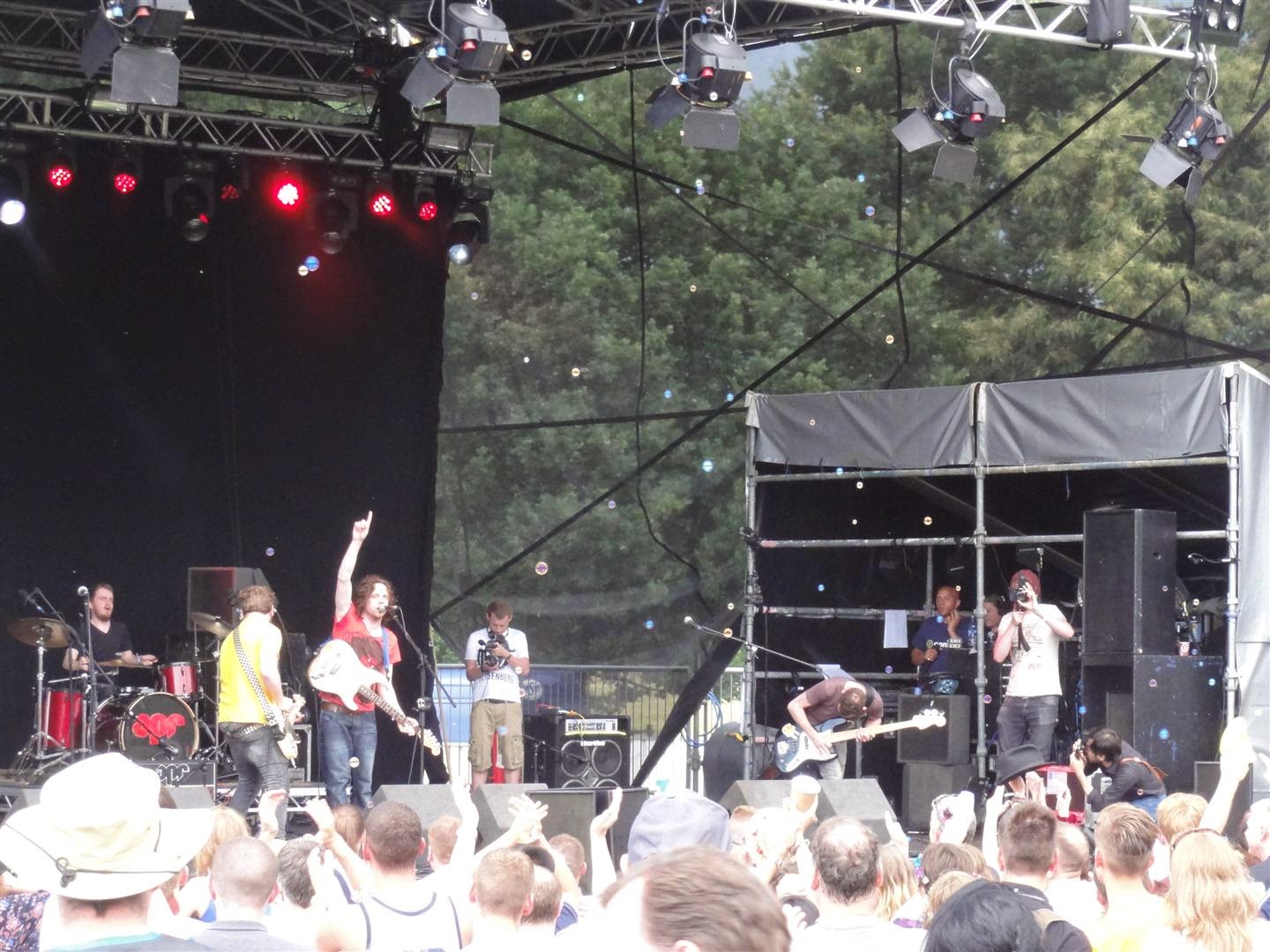 Then the next downpour came, it must be something the Foxes said up on main as most of their crowd run for cover. The bouncers block the entrance to the allegedly full beer tent, which it isn't. L nips in the exit, her second most heinous festival crime after she got caught smuggling a bottle of orange squash into the Leeds festival one year and I follow. I’ve no idea why they have separate entrances to the beer tent, perhaps this is the reason.

The rain abates a bit as The Rifles take to the second stage. I saw this band eons ago and I’ve always felt I should see more of them but they don’t do anything to particularly stand out today. 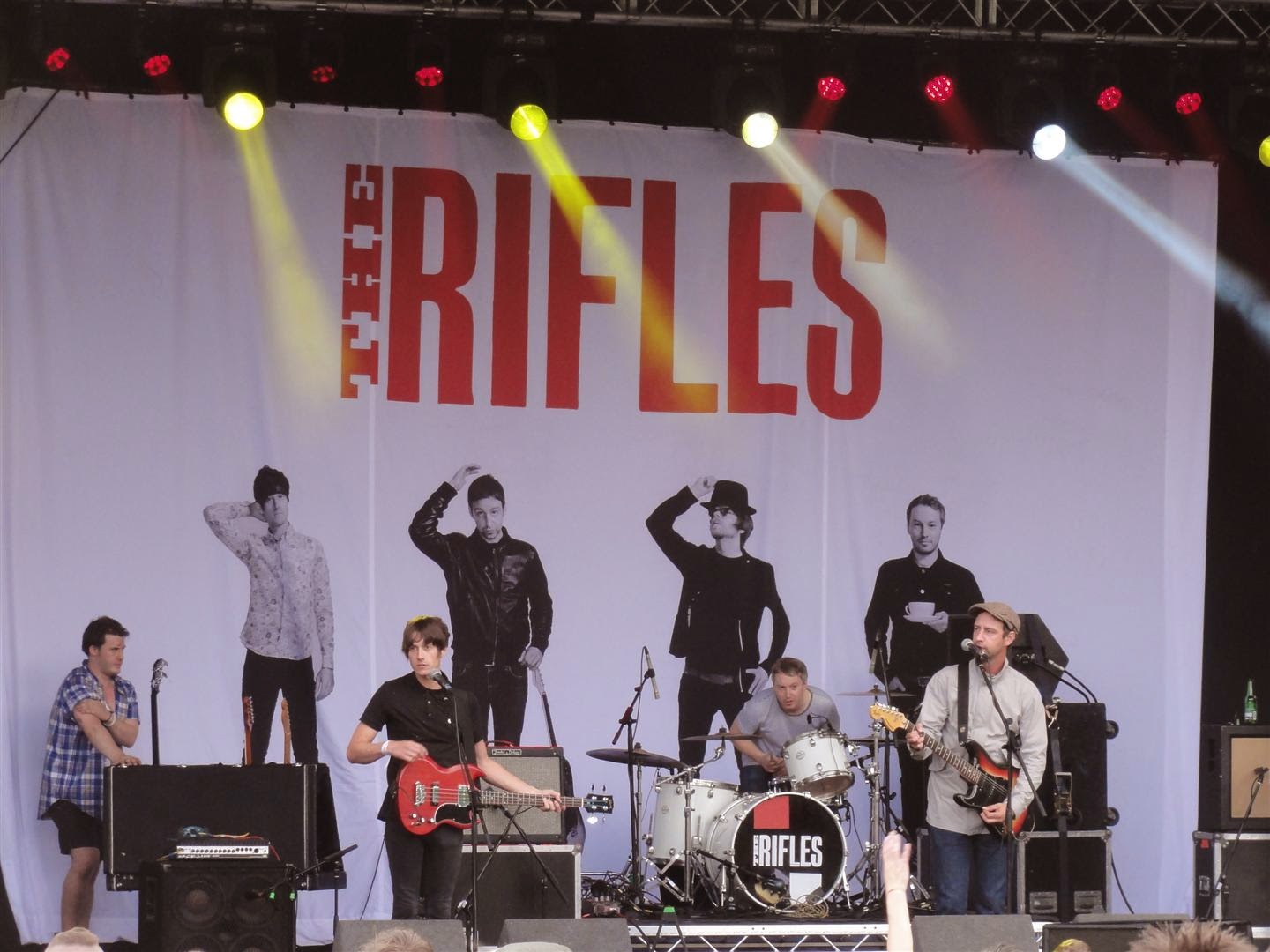 You can hear Scouting For Girls quite clearly from the second stage, so there’s no need for us to move closer, even if we wanted to. In fact, there’s plenty of need to move further away but we await Reverend and the Makers who are late due to technical problems or perhaps due to a late running Scouting for Girls. The Makers arrive and launch into the irritatingly lively Bassline.

The Makers pull out everybody’s favourite tunes and put on a slick show. Unfortunately for them all those favourites hark mostly back to their debut record. Their new album provides just two tunes tonight. Still, theirs is probably the best set of the day.

I've always felt I should see The Happy Mondays before I die (or they do). Not that they're my sort of thing because they're not, just because they are sort of 'legendary'. So I try, briefly, to like them but soon decide that they are still nothing like my thing.

Along with Reverend and the Makers, tonight’s second stage headliners the Boomtown Rats are the reason I’m here. Although I’m sure The Rats couldn’t possibly top their amazing performance at Rock City last year but, to be fair, they come close. A truncated version of that set, including the same stage banter and Geldof in the same suit, goes down exceptionally well even if the crowd do ignore Sir Bob's instructions to take off their clothes. 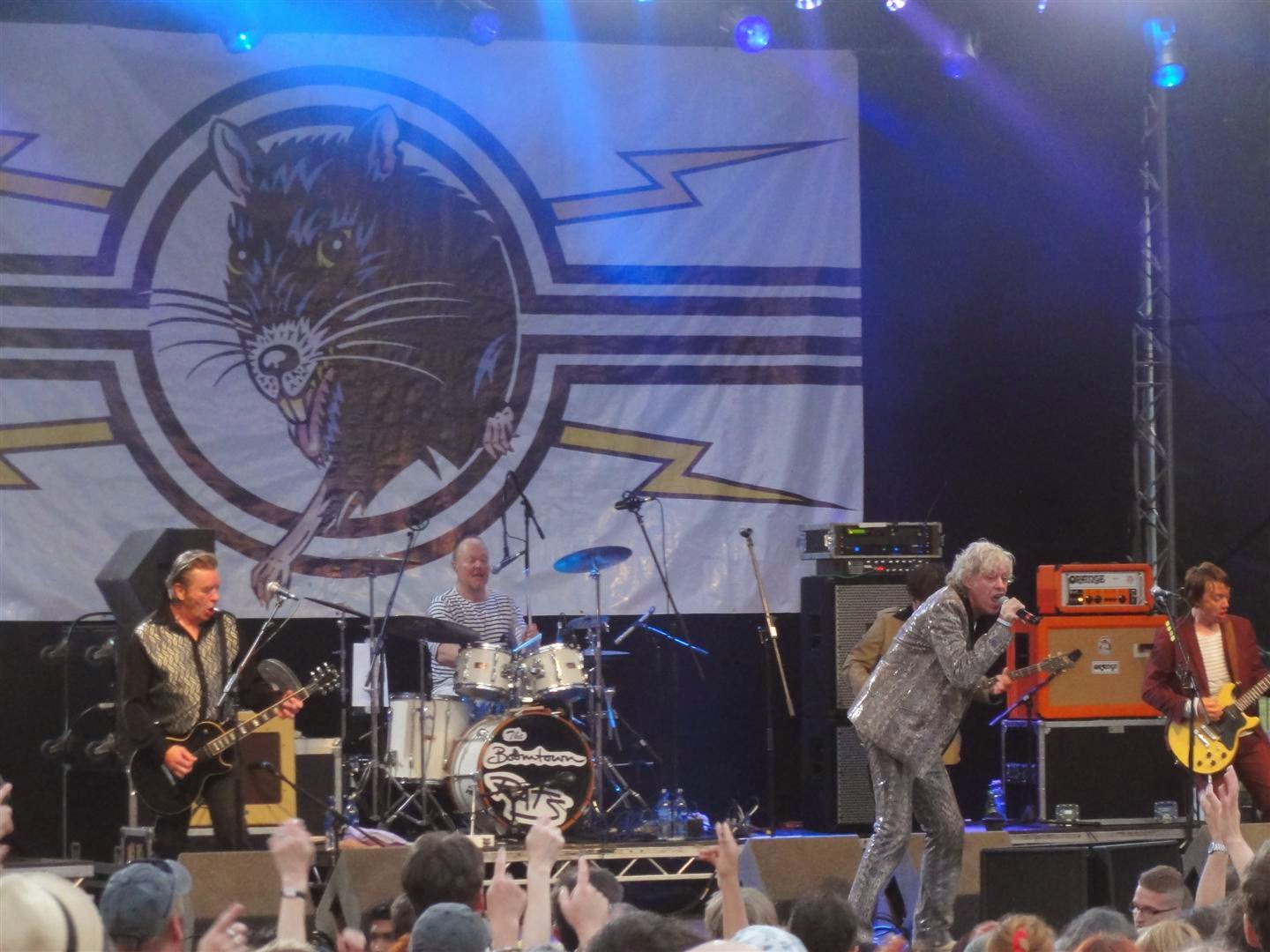 Most of the crowd depart after the set closing Rat Trap which is a shame because Diamond Smiles in the encore probably steals the show and the Rats push the Makers close for performance of the day. McClure and co just shade it though, with the real ale tent coming in at third, as for the first time ever it lasts well into the evening this year. 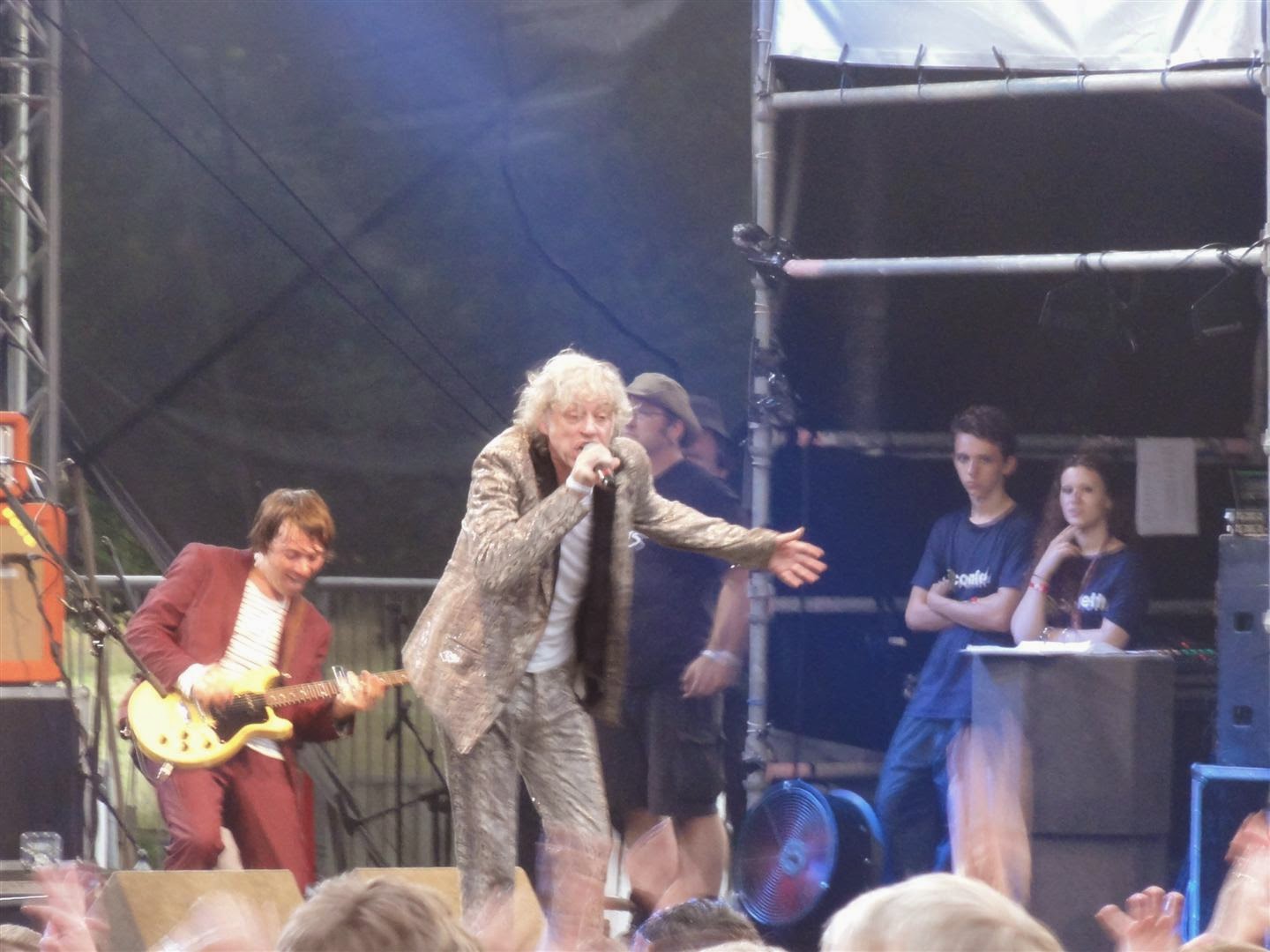 Finally to close the evening there’s Tom Odell, who I don't really know and he looks about 15 although he's actually 23. So I can't even say he's a young person’s Jake Bugg, who’s not my thing either but by now we’re heading for home.