A Distinct Absense Of Sun

We are somewhere near York at Allerthorpe for the Sundowner Middle Distance Tri, an event that is in only its second year. The race starts at midday for those planning on taking over six hours and at 1pm for those planning on being a little bit quicker. After recording 5:52 at the Outlaw Half I recklessly place myself in the latter group. The aim is for everyone to be finished by the time the sun goes down. The only problem is somebody forgot to book the sun.

This leisurely lunch time start is pretty unique in the world of sport and makes for a relaxed morning unless your other half has opted to enter the Sprint distance which kicks off at 9.30am. 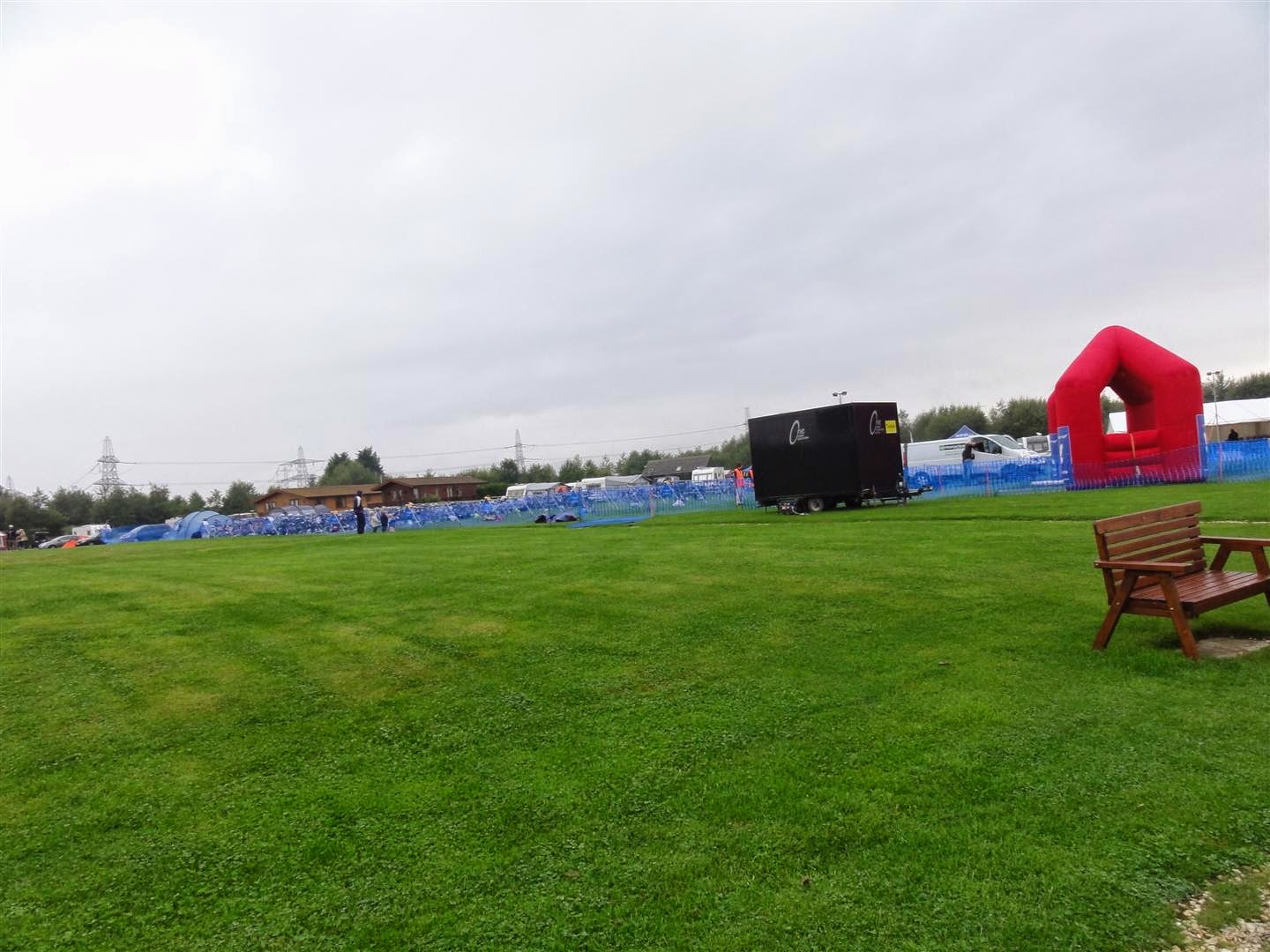 So first a spot of supporting. L has to do one and half laps of Allerthorpe Lake, which is so shallow in places that when they start some folk walk or run the first section before diving into the water. This is followed by a 20k bike and then a 5k run, all of which takes part in steady miserable rain.

The rain has stopped by my start time although the black clouds overhead are clearly promising that this is only a temporary lull. My own swim involves four laps of the lake and as I’m hopeless at counting lengths in the pool this could pose a bit of a problem. My swim watch, I’m guessing, will be unable to help me here by counting the laps without a definite side touch to set it off. 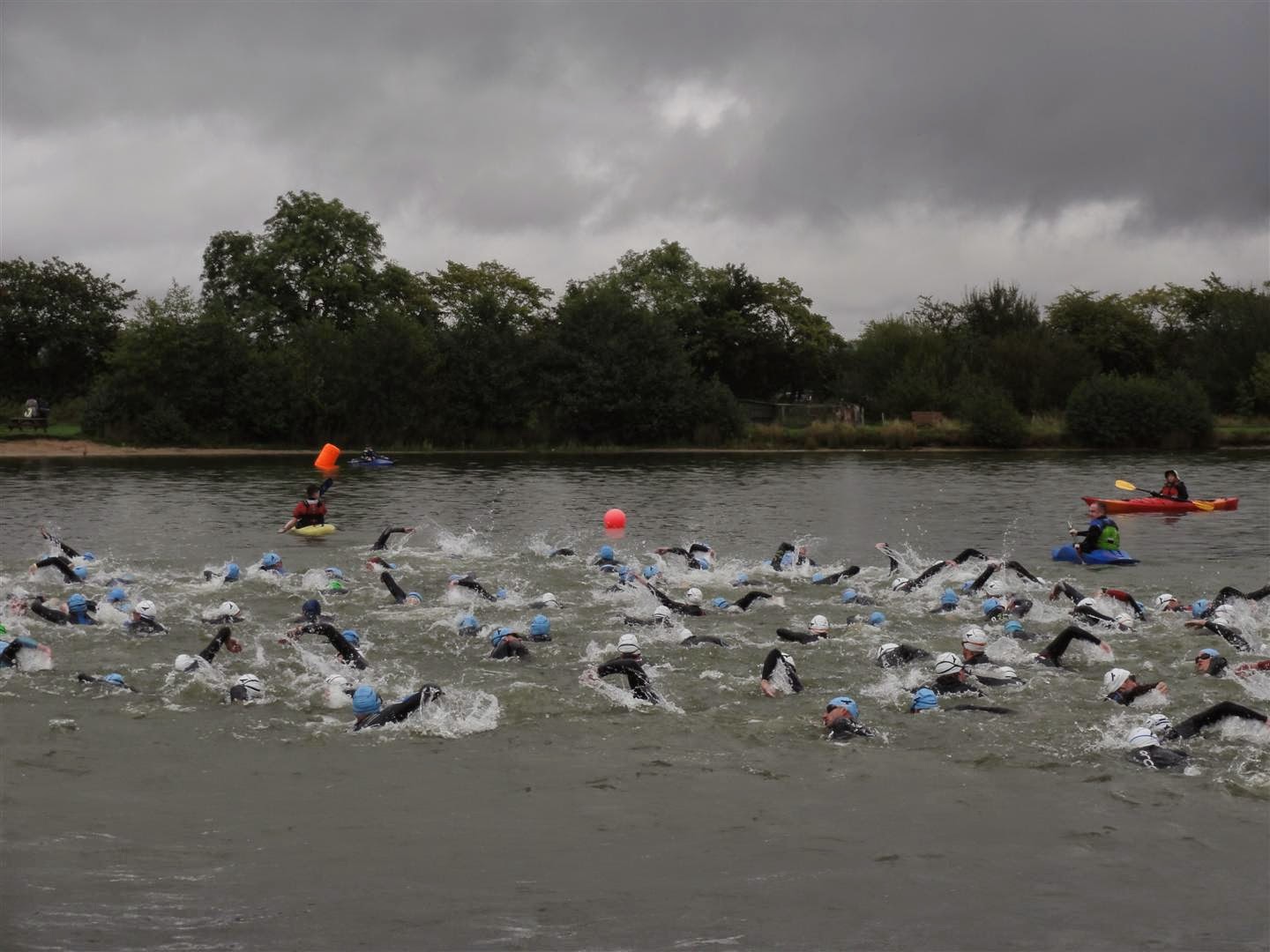 Already unsettled I mess up lap one by going off way too quickly but somehow I manage to stave off an impressive attempt to drown. After a bit of breast stroking, a touch of embarrassing backstroking and even a spot of walking in the shallow bit I pull myself together but I still emerge from the water in 43:18, five minutes down on my Outlaw time. Maybe I did an extra lap.

The rain that had serenaded L’s event is now back as I set out on the first of two laps of the 45k bike course. Lap one is completed in a satisfying 1:26 and I’m sure I can go faster and break 2:50 but the weather has other ideas. Pretty soon it’s hammering it down and the roads are awash. I finish the bike in 2:55. Still not bad though, ten minutes up on the Outlaw and without the aid of L’s fruit and brandy cake. It was probably more due to the lack of a loo stop and an absence of any attempt to break my thumb this time.

I did almost have a mishap at the end of the first lap when they handed me a drinks bottle with a screw top. How the hell are you supposed to remove that whilst cycling? Eventually I manage to chew it off with my teeth and without crashing.

Then it’s the three lap run, each one involves a loop around the lake before heading out onto the public roads for an out and back section. It is only along a minor B-road but it’s possibly the narrowest and most congested minor road you’ll ever see. Every lap sees everyone dodging their way through a never ending stream of land rovers and tractors. It’s almost as if it’s some deliberate protest against the race. 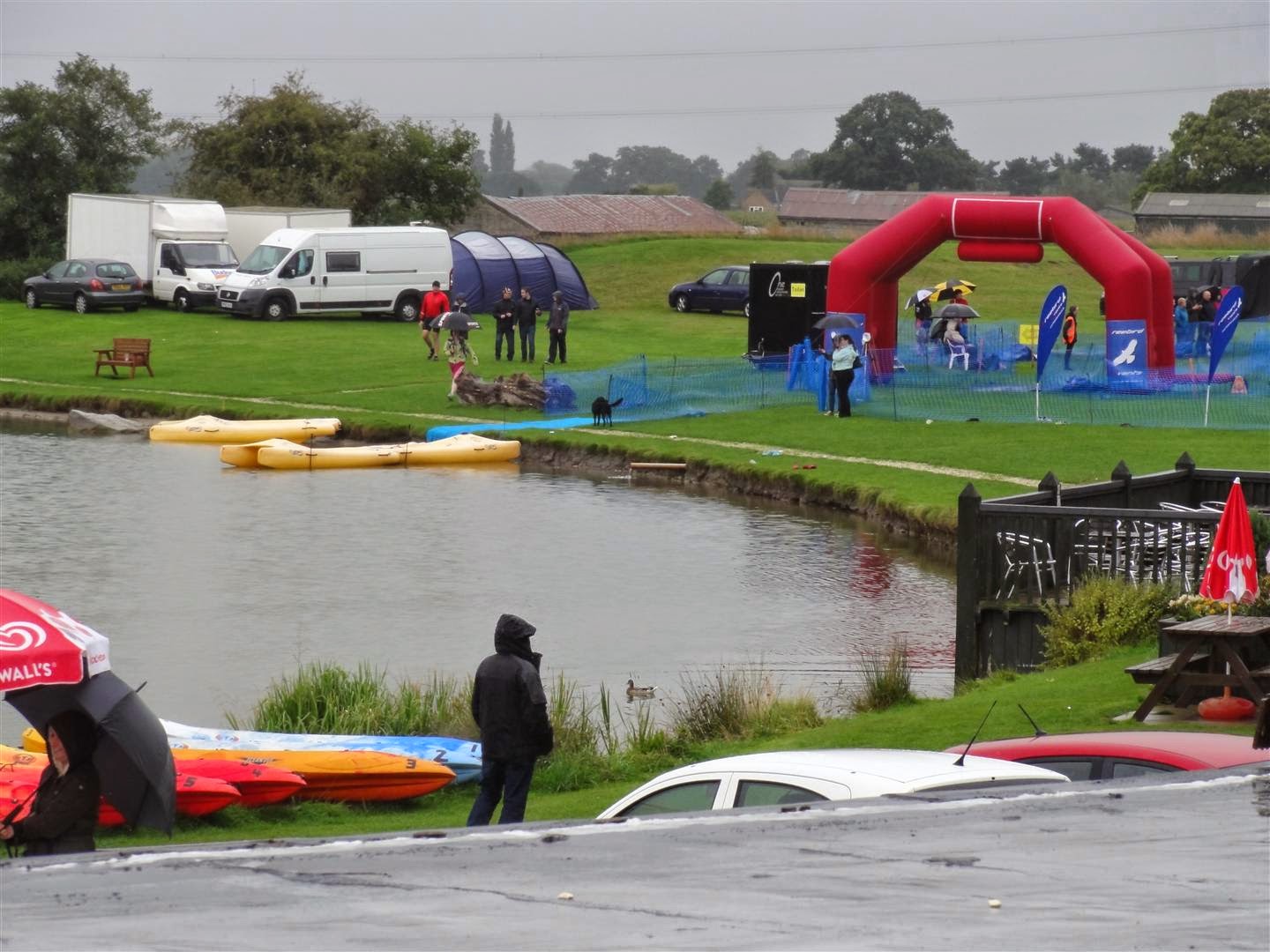 It’s not helped that the puddles either side of the road are making the strip of tarmac we are running along narrower and narrower. Conditions on the run are no better than on the bike. Bouts of persistent rain are interspersed with more torrential wind assisted offerings.

They had warned us that anyone starting the final lap of the run after 7:00pm would need to carry a head torch and a red rear light. I’m hoping to beat that deadline unless my calves explode.

They don’t and I run every scrap of the distance recording a 1:57 half marathon, which I feel was a triumph for my pacing which I got spot on. Then as I cross the line, the rain stops. Typical.

I did try and up the pace on the final lap to see if I could push myself under 5:40 or even 5:30 but the calves refused to co-operate. My time though was just over 5:40. 12 minutes up on the Outlaw Half. Get in there.

Afterwards there’s a post-race party with some free post-race food but only if you’d done my distance, not L’s which seemed very unfair. The heated marquee proves useful as I try to dry and thaw out with the aid of one of the hot air blowers.

We spend the night on the wine and are entertained by a guitarist who has come all the way from Nottingham, just like us. Apparently he even plays in our local pub.

Despite the weather, an excellent event.